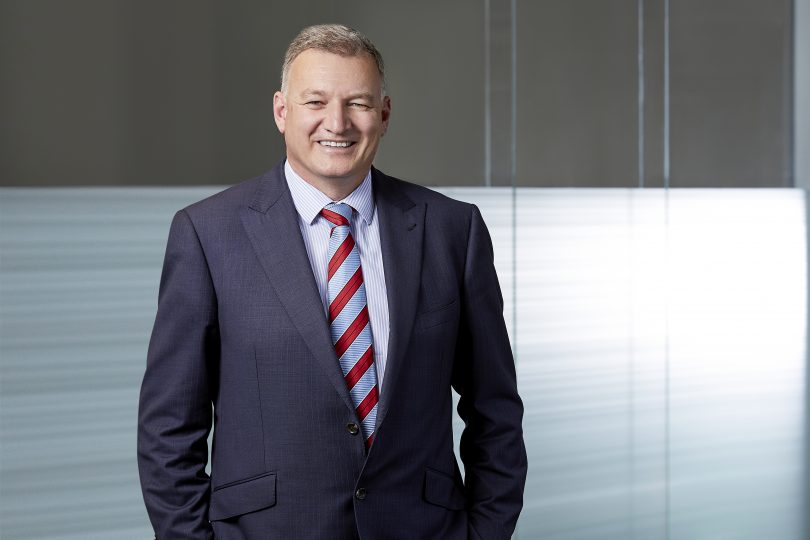 Michael De’Ath has abruptly resigned from the Health Directorate and returned to Melbourne to be with his family. Photo: Supplied.

The abrupt resignation of the ACT Health’s Director-General, Michael De’Ath, has thrown a spanner in the works of the government’s COVID-19 response. However, Health Minister Rachel Stephen-Smith insists it will be business as usual as the territory continues to flatten the curve and push ahead with the SPIRE project.

Mr De’Ath has returned to his family in Melbourne in what Minister Stephen-Smith called a difficult time.

All of his daughters have been affected by COVID-19 in some way, she said, and it is understood that he has already arrived in Melbourne.

The Minister said she was not aware of any complaints raised by Mr De’Ath over ACT Health policies when asked if his resignation was a protest against the government’s pandemic response.

“I have worked with Michael for three-and-a-half years and know how deeply devoted he is to his daughters, who have each been impacted by the COVID-19 pandemic,” Ms Stephen-Smith said.

“Obviously this past month has been very difficult for everyone [but] he has not conveyed to me that that was part of his thinking.”

Mr De’Ath was appointed to the role at ACT Health in April 2018 where he oversaw the re-accreditation of Canberra Hospital. He also oversaw the re-structure of Canberra Health Services to become a separate organisation, which is now headed by Bernadette McDonald.

Ms Stephen-Smith lauded Mr De’Ath for his work in changing the culture of the organisation after his appointment as he worked to implement the Independent Review into the Workplace Culture within ACT Public Health Services.

“Michael has been absolutely committed to leading cultural change across the ACT public health system and he can be rightly proud of what has been achieved to date,” she said.

“Cultural change takes time, but the recent climate survey results indicate that the Directorate is on the right track.”

Minister for Mental Health Shane Rattenbury thanked Mr De’Ath for the vitality and energy he brought to the role.

“Michael instilled real clarity of purpose for the organisation, providing clear direction and enabling our staff to do what they do best, delivering high-quality health services,” he said.

It sounds like a case of “If you can’t stand the heat, get out of the kitchen”. He was content to cruise along leisurely collecting his pay and enjoying the perks but when some work finally came along he went to water and p*ssed off back to Melbourne. Hopefully the next Director-General is made of sterner stuff and will put in the effort to help us overcome the COVID-19 crisis rather than simply being a time server unable to cope with the job when the chips are down.

Why wasn’t his family living in Canberra too?

Ol L - 1 hour ago
Interest free but still a loan. And who would want a second hand EV given their finite batteries? And yes I do own one. View
bryansworld - 22 hours ago
However, this would create a signal for new suppliers to enter the market and undercut the original ones who are trying to go... View
keek - 24 hours ago
Great way to ensure the prices of these things all rise very sharply once suppliers know there is an easy 15 grand in it for... View
News 11

chewy14 - 3 hours ago
Dolphin, The Greens will never be a realitisic alternative whilst they refuse to deal with reality when determining their pol... View
dolphin - 14 hours ago
its not hard jwinston, just look at the libs and you understand why. they are just too socially conservative for most of us.... View
HiddenDragon - 16 hours ago
"....The question now is making it work and be accessible to as many Canberrans as possible..." No, Zed, the question is and... View
News 31

Kristine Evans - 12 hours ago
Andrew Barr Then you need to let parents into schools before this happens. View
Christopher Marlowe - 14 hours ago
Jenna Vdv that's why HECS/HELP exists View
Rod Phillips - 15 hours ago
I'd like to see a bit more planning and less guessing all round! We've seen the impact of poor quarantine procedures through... View
Community 1

No new COVID-19 cases in ACT, telehealth available to outpatients

@The_RiotACT @The_RiotACT
Three young detainees who pleaded guilty to a range of charges over the violent 2019 riot at Canberra's Bimberi Youth Justice Centre have avoided spending extra time behind bars https://t.co/UFXHnxAmx4 (2 hours ago)