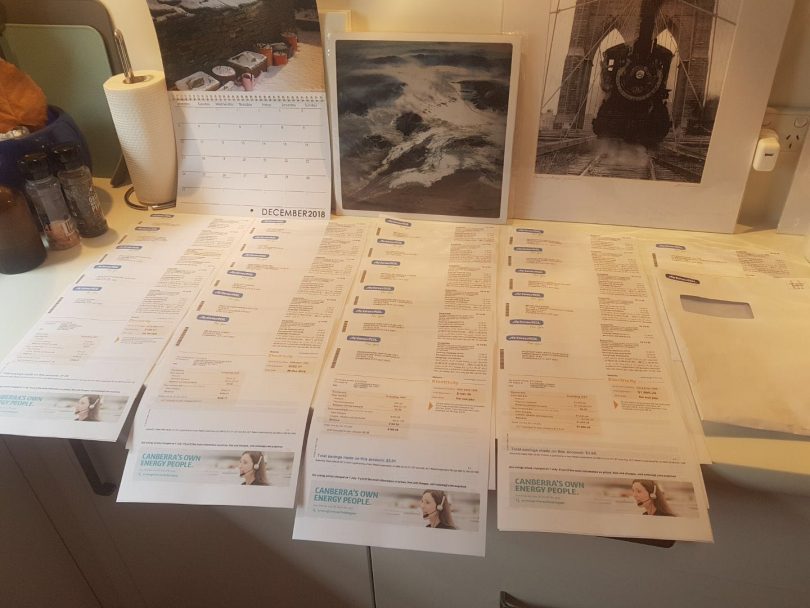 The bills that were sent to Reid woman Helen Dent in a single envelope. Photo: Supplied.

The mass mailout of utility bills to the wrong customers in the ACT only serves to further erode trust in government’s and service providers’ ability to handle private information, according to a Canberra woman who received in a single envelope about two dozen invoices meant for other people or organisations.

ActewAGL has mounted an investigation into the embarrassing mailout error and privacy breach that has affected about 6000 energy and water customers, also informing the Privacy Commissioner.

It has blamed a processing error by a third-party contractor, and has begun contacting known affected customers and collecting the misdirected mail, which went out in early December.

Reid woman Helen Dent’s batch is relatively small compared with others who received envelopes containing up to a hundred bills.

Ms Dent, a former chair of the Australian Shareholders Association, said the invoices, which she collected from her GPO box on Thursday (13 December), were meant for small companies and individuals across Canberra but also included two for an ACT Government agency that was behind in its account and owed more than $6000.

She assumed at the time that the envelope contained, albeit large, advertising material.

Ms Dent said the mailout was a great advertisement for not giving your private information to government entitities, asking how anyone could trust them.

Referring to the MyHealth saga, Ms Dent she would prefer that her medical history was accessible too but “I don’t part feel very good about the possibility that government is going to have a lot more access to all sorts of things if they have a range of data that they can match”.

She said it was very convenient for ActewAGL to blame its contractor and questioned the company’s quality control or checking processes.

“They should have had some sort of quality control that would alert them, for example, if an envelope had more than one invoice in it,” she said.

But it might not be sufficiently sophisticated, she said.

Ms Dent’s daughter, Anna Bruce, said she also knew of a Yarralumla accountancy firm that received an envelope with about 100 invoices meant for local residents.

She wondered if the process was so automated that no human being was involved enough to become concerned about multiple bills going into single envelopes.

A contrite ActewAGL urged anybody who has received mail not intended for them to leave it sealed and contact them on 13 14 93 to arrange collection.

It has suspended all mail-outs until its investigation is complete and will extend bill payment times for those customers affected.

“We apologise for any inconvenience or concern caused,” it said.

“Our customers’ privacy is of the utmost importance. We are investigating the matter in accordance with our internal procedures, which reflect the guidelines publicly issued by the Privacy Commissioner’s office. We have advised the Commissioner’s office of the incident.”

ActewAGL said there was no personal bank account information printed on a bill. The customer details include the account name, postal address, water usage, amount owing and an account reference number.

ActewAGL is 50 per cent owned by the ACT Government.

The way in which Icon Water has handled this privacy breech is disgraceful. They should be looking for a new customer services/public relations manager.

The most terrible thing about this, in my view, is the very casual way that Actew responded. According to the Crimes, when contacted by the people who received the bundles, Actew just said “mail them back”. Then later, they said they would collect them but never did (or until much later, anyway).

Stuff happens, but it is how an entity deals with the problem that reflects their culture. This lackadaisical response show how little they care about customers’ private information, and how poor their problem management is.

This reminds me of an incident about 20 years ago when stuff from Transact was being mailed out in ActewAGL envelopes.

No explanation was given to me but it was revealed later that TransACT had been given access to a database for marketing purposes.

It was referred to the Privacy Commissioner and the practice stopped immediately.

I've seen some looonnng "trams" then with many carriages then going down or beside roads. In… View