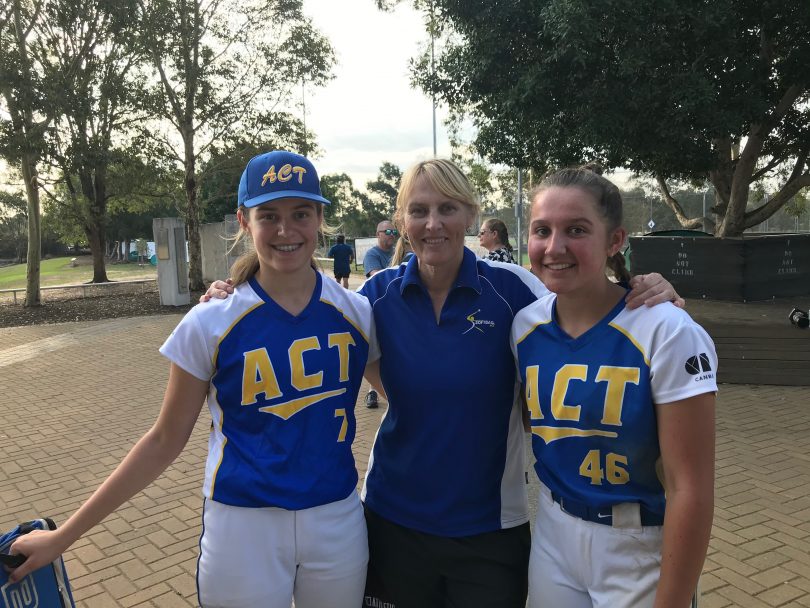 Sally with her daughters, Samantha and Caitlin, both representative softballers. Photo: Supplied.

Family was a big part of Sally McCreedy’s long career and success as a softballer – she ultimately represented Australia more than 350 times over 18 years.

Her family continues to be a significant part of her decision making to this day. This is evident as Sally takes a step back from coaching the sport she loves.

With two daughters, Samantha and Caitlin, both representative softballers, Sally says it’s time to “enjoy being a parent”, adding that she’s “keen to see my girls coached by somebody else”.

It’s a big decision when softball seems to have been a part of her DNA from the time she took up the sport as an eight-year-old at Downer Primary School.

Ten years later, Sally was making her debut in the Australian team.

“Mum and Dad were happy for me to play every sport when I was growing up. They were so supportive when I was playing softball, including travelling to nearly every tournament in the world. I couldn’t have had more supportive parents.” 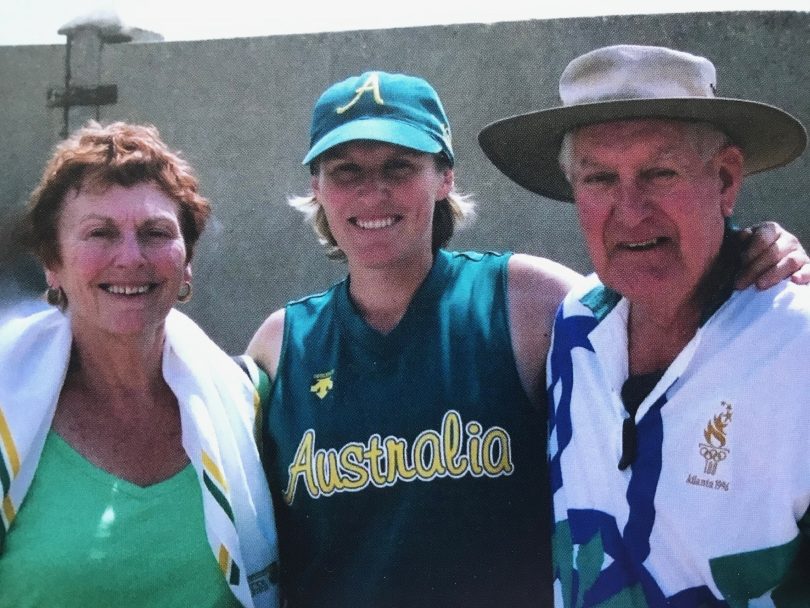 Her parents, Margie and Mike, certainly did plenty of travelling.

Sally’s record includes two Olympics, the first in Atlanta in 1996 and the second being the Sydney 2000 Olympics. At both, the Australian team won the bronze medal.

READ ALSO: Memo to Channel Nine: the Raiders are ready for prime time

Through her five world championships, Sally matched the record for the most appearances at the Softball World Titles. At the time of her retirement from the Australian team, she had played a record 356 times for her country.

Sally went through her early years as a foundation player with the Boomerangs Club in 1977 and made countless appearances in representative teams.

And Margie and Mike watched plenty of softball, from the Boomerangs through to representative levels. 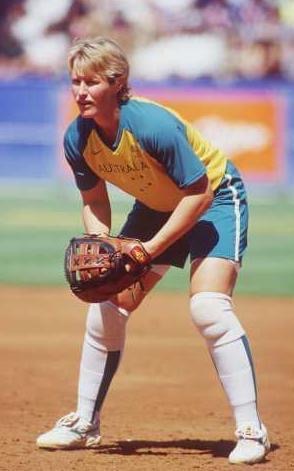 Sally was a member of the Australian softball team at the Atlanta and Sydney Olympics, winning a bronze medal at both. Photo: Supplied.

Then there was hockey.

“I played first-grade hockey with Central when I was about 15 or 16 years old. Over the years I played with United and the ANU. I still play hockey with the Time Travellers in the third grade competition. The team includes Jo Brown who also won bronze in softball at the Atlanta and Sydney Olympics.”

Sally played for the ACT in hockey, but then had to make a choice when her softball career began its ascendancy. Despite her softball focus, her involvement in both sports continues to this day.

Softball has given her plenty of highs, including the two beforementioned Olympics, until her retirement in 2002 to have her first child.

When softball was introduced into the 1996 Olympics, Sally had been in the Australian team for 11 years.

“The timing for me was perfect,” remembers Sally. “I was at the peak of my game.” 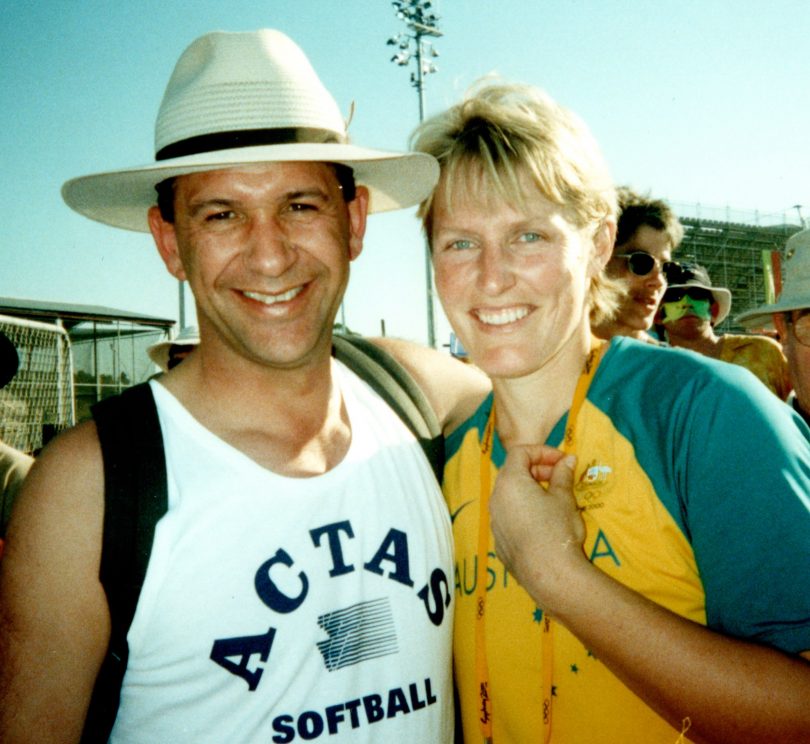 Sally and Richard – the best coach she’s ever had. Photo: Supplied.

1996 was also the year she married Richard McCreedy.

“The first time I saw him he was coaching Queanbeyan and was ejected for arguing with the umpire, I didn’t think much of him then, but to this day he’s the best coach I have ever had, and we ended up coaching the ACT women’s open team together a couple of times.”

Richard went on to become the assistant coach of the Australian team at the Beijing Olympics in 2008. This was the last time softball was played at the Olympics, although it will make its return in next year’s Games in Tokyo.

The on-again-off-again nature of softball at the Olympics is something that stirs Sally, with softball not part of the program once again for the Paris Olympics in 2024.

“There needs to be some consistency. Softball really deserves to be in the Olympic program. It’s such a fast exciting game, with dedicated, talented athletes provided great role models for aspiring juniors.”

Softball, it would appear, has always been a constant in Sally’s life, whether she is playing or not. 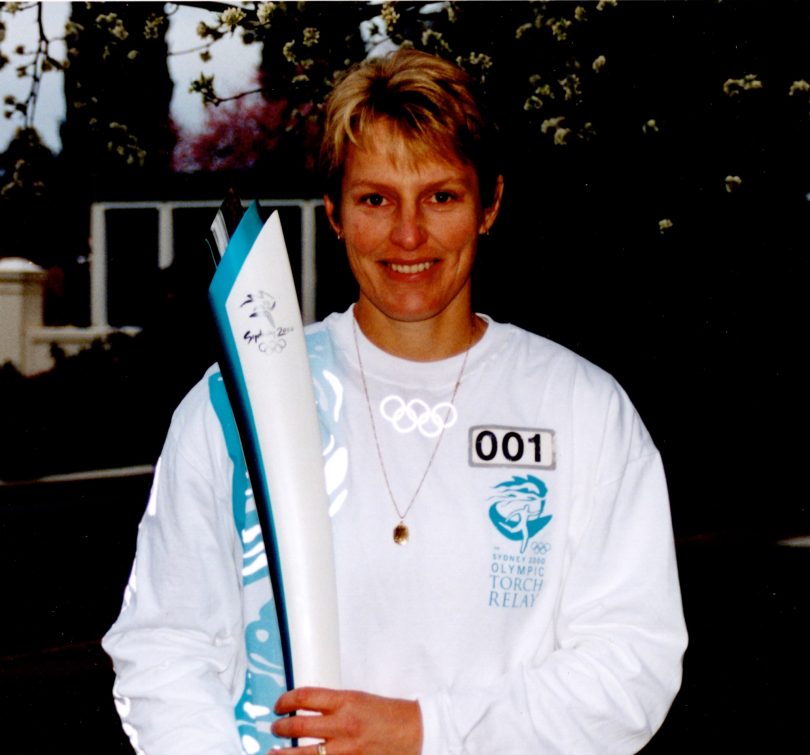 Sally with the Olympic torch in 2000. Photo: Supplied.

She carried the Olympic torch in the lead up to the Sydney Olympics, meeting Nelson Mandela in the process, which she describes as a lifetime highlight.

Sally has also experienced success as a coach from her first foray as a 15-year-old, going on to become the first coach of the ACT open men’s team when she was only in her early 20s. Sally recalls, “It was daunting at first, but they had respect for me.”

While Richard and Sally have stepped back from coaching there is no shortage of advice and support for their girls. The evidence is clear as Sally proudly illustrates: “Richard built a batting cage at the back of our home in Flynn.”

Now at 55 years of age, Sally remains as upbeat as she was as an eight-year-old about the positive impact sport can play in life.

“I think it’s fantastic for kids to play as many sports as possible.”

A supportive family was the key for Sally, and both Sally and Richard are clearly living by that creed.

Congratulations on a brilliant career Sally McCreedy a great article.👏👏

Thanks so much Tim Gavel! 😊😊

Great article Sally McCreedy! What a legend you are and a fantastic role model!

Trevor Hicks - 9 minutes ago
About time 👍 View
Jess Puddick - 2 hours ago
Kimberley love it, so excited for it to be restored! View
Juergen Voss - 2 hours ago
More townhouses? View
Opinion 11

Shane Westmore - 8 hours ago
Absolutely. There’s people voting now who are completely misinformed about anything going on in this country & waste their... View
Nada Krstin - 10 hours ago
oops, meant to say, cannot have it one way! :)... View
Nada Krstin - 10 hours ago
No. And if you think they are mature enough to vote at 16 or 17, then they should be tried for any crimes as adults as well,... View
Opinion 94

George Watling - 8 hours ago
Marc Edwards Spot on Marc. The best way to deal with congestion is decentralize workplaces. If everyone is travelling to a ce... View
Opinion 70

thebscaller - 8 hours ago
So what have you achieved other than self promotion? A message from someone saying that the only hope they have is for a libe... View
Mark Parton MLA - 11 hours ago
Thanks for constructively engaging, but I would reject the characterization of my advocacy for Alex as a media stunt. And I w... View
Renee Mae - 13 hours ago
Tenant went without hot water between Feb and end of April due to possums chewing parts of the hot water system. Wouldn't fix... View
Property 1

ACT resident - 9 hours ago
It is unrealistic for the Canberra community to pay for a company’s poor commercial decisions. The risks for CRS, newly reg... View
HiddenDragon - 13 hours ago
"...Capital Recycling Solutions, is in early talks with the government about its costs. It is hoping for an agreeable settlem... View
Lifestyle 1

Enita Hampton-Donnelly - 13 hours ago
Melissa Flis thank you. Right up her alley - one day 🙂 View
Property 11

@The_RiotACT @The_RiotACT
After 14 years, Chris Rourke has been honoured by the @ainslie_fc. The club recognised his six premierships as coach, and the life-changing culture he embodied for countless footballers https://t.co/IVaNUvjnAr (1 hour ago)