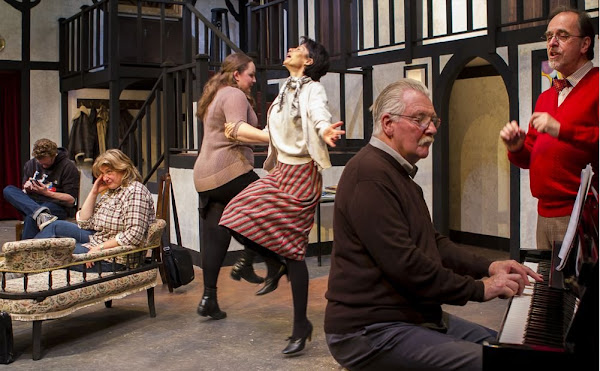 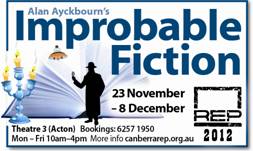 Opening on 23 November the production continues until 8 December at Theatre 3, 3 Repertory Lane Acton.

Directed by Corille Fraser this very funny play is both improbable and magical.

It is nearly Christmas and a meeting of the Pendon Writers’ Circle is about to begin.

But beware—you may learn more than you wanted to know about putting pen to paper.

Our would-be authors draft, but never quite finish, historical romance novels, children’s picture books, clumsy conspiracy sci-fi stories, detective fiction and musicals — though the adaptation of The Pilgrim’s Progress into a musical may not be to all tastes.

In addition to being one of REP’s life members, Corille Fraser has performed and directed on multiple occasions for Canberra Rep.

Make sure you pay attention from the beginning…as the fast and furious pace will keep you hooked as you experience this truly entertaining and Improbable Fiction.

Lucas Danes - 7 minutes ago
Yes please and thank you very much. View
Bruce Lamb - 42 minutes ago
Will never happen if racing has to be finished before 5 pm. The almighty TV gods that have complete control of Supercars will... View
Rick Skein - 58 minutes ago
Would b gr8 2 c the v8s race there again View
News 10

Daniel - 8 minutes ago
Alice Boc just run through it I do. 😂 View
Liz Lagos - 15 minutes ago
Scott Utteridge might have to hold off with our gardening plans View
Tania Turner - 15 minutes ago
ummm it pretty much does this every yr do people seriously have no memory of the yrs they have lived View
News 18

Mark Heinrich - 8 minutes ago
Warwick Bradly - I stayed at Macquarie Hostel when I first came to Canberra in 1984. ‘Live-in’ officers were normally qua... View
Peter Graves - 48 minutes ago
Some very interesting memories here. Anyone's go back as far as Reid House, Barton House (which wasn't a Government one), Hot... View
Steve Herczeg - 59 minutes ago
There was that too!! Some of the workers were scary. View
News 5

chewy14 - 8 minutes ago
The reason why those plans are pushing for Vaccination of parents and teachers is not to protect the children, it's to protec... View
Dilkera - 37 minutes ago
In commenting about students returning to school, it is important to remember there will be a cohort of 0 to 11 year old chil... View
Community 61

Drew Finn - 14 minutes ago
Shannon Panchuk Haha. Fantastic! No, I just saw you were involved in this, and also Kimberlee was with the grandkids. Hope yo... View
Lorraine Clements - 25 minutes ago
Got some outside our place that I have put little jewels all over them. View
Opinion 54

chewy14 - 19 minutes ago
Won't be fooled again, That's a joke right? This isn't about China launching a military attack on us in the short term, it's... View
Futureproof - 2 hours ago
We don’t owe the French anything. This is a business transaction and all they produced was paper and highly paid middle men... View
Community 5

Brian Lodge - 31 minutes ago
Hi Susan how wonderful Congratulations to Mark and Coral , they were great neighbours (very caring) back at Tulla over the ye... View
Gail Tully - 1 hour ago
Thank you Amy View
Lifestyle 5

Alisha Tarrant - 1 hour ago
This is a big loss for those whose needs were meet by facilities at AIS. A real shame for members physical health and also me... View
Motoring 8

Have you stumbled across small, hand-painted rocks on your walks recently? The playful pastime is becoming a growing trend in...
Opinion 54

@The_RiotACT @The_RiotACT
Work has commenced at Yarrah, an affordable, vast housing development in Yass that offers first homeowners, families, singles and empty nesters a retreat from the city https://t.co/FAvEaVHiuz (45 minutes ago)

@The_RiotACT @The_RiotACT
Cold weather is sweeping in again across NSW and ACT, potentially bringing #snow, #hail, and damaging #winds with it. Here's what you need to know https://t.co/SiTWclpxRK (3 hours ago)