They that go down to the sea in ships have never doubted the existence of rogue waves.

Fortunately the ANU is letting us know they’ve figured out how it happens with the help of a fish tank and a lego pirate.

Using a scientific fish tank, a wave generator and a Lego man on a ship floating on the water surface, the scientists were able to demonstrate that rogue waves much bigger than previously thought can occur. The team have labelled these ‘super rogue waves’, as they can be up to five times bigger than the other waves around them. A video of the experiment can be seen here [Above]

“This observation could have far-reaching consequences for our efforts to understand these waves that are, by far, still mysterious,” said Dr Akmediev.

“The large amplification of the rogue wave peak above the normal waves around it suggests the existence of a new class of waves – the so-called ‘super rogue waves’. Our results show that, even in a sea characterised by small waves, rogue waves can naturally develop due to the nonlinear dynamics of the surface elevation.

“This is an extraordinary fact that could explain some mysterious observations of rogue waves in calm sea states.”

Rogue waves have only recently been accepted as science fact, rather than fishermans’ tales of the deep sea. Despite decades of debate among scientists, a prototype of how a rogue wave could develop – called the Peregrine soliton – was only very recently observed experimentally in fibre optics. 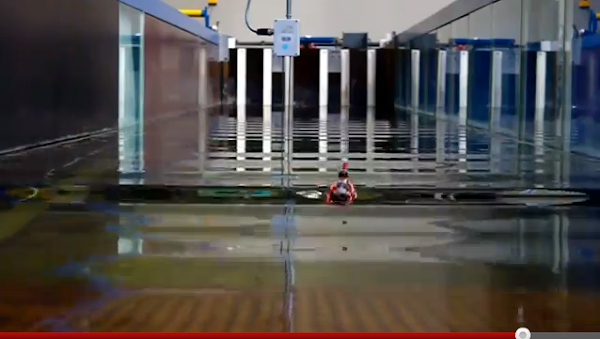 Yep, I think evidence of the existence of rogue trolls is mounting. I might build me a Lego model, and demonstrate how they like to make waves. But it’s going to be hard to convince my establishment colleagues who never ever let hard evidence sway their irrational and uninformed beliefs. Why, only the other day, I overheard a professor remarking “Successful Troll is successful!”, before emitting a cloud of climate enhancing methane. There’s no way an old fart like that will ever come to accept the existence of rogue trolls. *sigh* It’s just me against the establishment again.

Also, to revert to type, I think, when they say fishermans’, they meant fishermen’s. Fishermans’ isn’t even remotely correct.[\quote]
I thought it was fisherpeople now to be more politically correct

Forget the Peregrine Soliton, I’m worried that any Lego parrot that the Lego pirate may have had on his shoulder drowned in the accident. And did the pirate have one leg made of wooden Lego? I can’t see the crucial details of the experiment well enough.

Also, to revert to type, I think, when they say fishermans’, they meant fishermen’s. Fishermans’ isn’t even remotely correct.

The punctuation has been giving me a very good time today.

They don’t discount it, they just manipulate the theory so the evidence can be ignored.

Is that my troll alert I hear dinging in the background?

They don’t discount it, they just manipulate the theory so the evidence can be ignored.

Bronwyn Wilson - 2 hours ago
Where are e teacher librarians going to come from? There are very, very few in the ACT - that’s why so many schools don’t... View
Chris Cross - 2 hours ago
Layla Barry almost $1 TRILLION and counting, courtesy of Federal Liberals, who almost scared the nation into recession with t... View
Pam Wood - 6 hours ago
Another rort in progress View
ACT Election 16