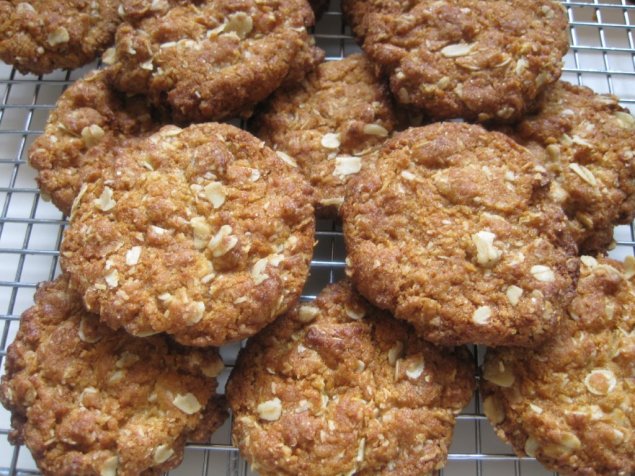 Both Australia and New Zealand share the tradition of Anzac biscuits.

During World War I the women left at home made biscuits to send to the soldiers overseas.

These were called soldiers’ biscuits at first, but became known as Anzac biscuits after the Gallipoli landing in 1915.

Anzac biscuit recipes are similar to much older recipes for rolled oat biscuits. They are crisp, hard and nutritious and also keep well. Some recipes contain dried fruit or nuts.

The biscuits were packed in airtight tins to keep them crisp during the long sea voyage.

This Anzac biscuit recipe is from the Australian War Memorial and is an original recipe from Bob Lawson, an ANZAC who was present at the Gallipoli landing.

I like to make these popular biscuits every year on April 25 to commemorate ANZAC Day.

Method:
Preheat the oven to 180C regular or 160C fan. Lightly grease two large baking trays. Mix the dry ingredients together in a large bowl and make a well in the centre. Melt the butter and golden syrup together in a small saucepan over low heat. Mix the bicarbonate of soda with the boiling water and stir into the melted butter and syrup. Quickly pour the foaming wet ingredients into the dry and mix through. Drop heaped teaspoons of the mixture onto the trays leaving room for them to spread. Bake for about 15 minutes or until golden brown. Turn the trays midway, if necessary to brown evenly. Leave the baked Anzac biscuits to cool on the trays for a few minutes and then transfer to wire racks. When cool store in an airtight tin.

Be sure to use the Australian standard 20ml tablespoon. Cut the sugar back to three quarters of a cup if you wish. Makes about three dozen biscuits.

LOOOOOVE when they are just lightly crisp on the outside and chewy in the middle! 😀

Tim Hough - 10 hours ago
That's some crazy conditions. I'd only find them borderline acceptable if we were guaranteed a Matildas match, but even then... View
Property 17

Tom Rilly - 13 hours ago
Why should the govt step in just because a developer stuffs up??? View
Lifestyle 31

dandelion - 13 hours ago
I tried Framing Master in Fyshwick based on some comments here, but can't recommend them. They offer little in the way of cus... View
Business 2

Capital Retro - 14 hours ago
"The last three weeks showed clearance rates of 89 per cent, 80 per cent and 70 per cent respectively, with the number of pro... View
News 44

Rob Thomas - 14 hours ago
Gabriel an Australian politician? Oh he probably is. View
Russell Nankervis - 16 hours ago
Lol a Liberal saying others are killing democracy. How ironic. View
Charlie Church - 16 hours ago
Sheridan New honestly would trade it for anything right now. View
News 4

Murray Emerton - 14 hours ago
Why can’t we get direct flights from Canberra to cairns. I would be on that!!!! View
News 14

chook58 - 16 hours ago
The RIOT article is more propaganda by the ACT Government. As a front-line protester and eye-witness there is nothing "humane... View
Community 1

Acton - 17 hours ago
From the above the eligibility is stated as being a permanent resident of the ACT and not in paid employment for more than 20... View
Property 1

@The_RiotACT @The_RiotACT
The sight of black cockatoos always gladdens Ian Fraser's heart. The sight of the powerful birds munching their way through bark to reach their favourite grubs is remarkable, but did you know that two species visit Canberra? https://t.co/Df0XtWwK7n (25 minutes ago)

@The_RiotACT @The_RiotACT
The Liberal and Labor candidates are neck and neck in Eden Monaro as the vote goes down to the wire and preferences run wild https://t.co/dG673PvvM6 (9 hours ago)

@The_RiotACT @The_RiotACT
Local jewellery designer Krystal Hurst is a proud Worimi woman who uses her creations to provide a sense of freedom and to connect with her culture and ancestors. She is a finalist in the Telstra National Aboriginal and Torres Strait Islander Arts Awards https://t.co/MtPLGJ3WwH (11 hours ago)