There was quite the commotion on City Walk this morning as the Canberra Pipes and Drums Band, the RSL, and the Australian Federal Police, with the support of the ACT Government and the Legislative Assembly, launched the “Remember Them” campaign.

The purpose of the campaign is to get the crowd at Anzac Day events wearing the black “Thank You” t-shirts in appreciation of the veterans and serving defence personnel, (Which might be a touch chilly at the dawn service).

The shirts sell for $20 each and proceeds go to the ACT RSL. The plan is to grow this into a national thing.

Chief of Staff to Chief Minister Stanhope, Jeremy Lasek, has committed $2,500 to the campaign from Government coffers.

If you want to participate, details on where you can get there are online. 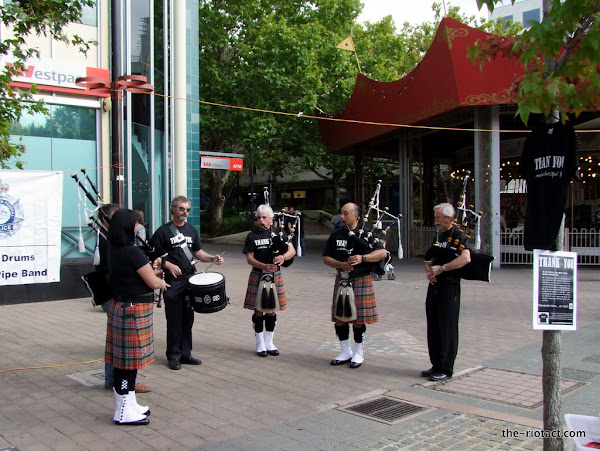 Oh god, that time of year again. No doubt the “debate” will soon start about whether children should be in the march. Could we just go forward to the first of May now, please?

That would have to be some of the lamest shit I’ve ever seen, anywhere, ever.

Yes, it’s “that time of year again”. The time of year when, with a mixture of great love, appreciation and heartbreaking sadness (I’ve go tears running down my cheeks now) I remember my dear old grandfather who spent two years as a teenager with 41 Bn 1st AIF watching his young mates from the sugar and dairy farms around Lismore being shot to pieces by German artillery and automatic weapons in a strange and foreign land that they didn’t understand. I think there were something like 1200 KIA from his Bn of about 450 men, so he saw a lot of dead men.

I remember more distant members of my family who didn’t make it, and whose names are on the roll of honour.

I remember Donny, my best friends father who I knew since I was a kid. He was totally and permanently incapacitated after 18 months fighting in Korea, again as a teenager. He died last year, and 50 years after his service he had the ANF and a slouch hat on his coffin when we said goodbye to him. I dunno…perhaps his service meant something to him and his family. You figure it out.

I remember my cousin Mick, who never really recovered from a year in the jungles of Vietnam.

I think of my mates Mal, Shorty and Johnno who came back from Vietnam with their bodies covered with shiny, tight, spidery looking purple scar tissue where the bullets and RPG’s had flayed them alive. Their minds were also covered with scars that you couldn’t see, but you’d only start to appreciate that after a few beers in the mess.

I even think a little tiny bit about my own ten years wearing a green cotton raincoat, and give thanks that nobody ever felt the need to shoot at me.

So, you silly smug ignorant fool, it (ANZAC day) might not mean much to you but it means a huge amount to some of us. And therefore I feel that your fatuously contemptuous disdain for the accumulated and incomprehensible suffering of my family, my friends, their families, and myself, whose sacrifices allow you to live as you do, is beneath contempt.

I hope you are able to endure the terrible suffering of having to live through a few peaceful late Autumn public holidays in Canberra, gritting your teeth and carrying on against overwhelming odds until the terrible trauma of ANZAC day is finally over. After that you’ll be able to head off once again to a comfortable coffee shop somewhere and make ironic postmodern observations (in a lazy drawl no doubt) about the lameness of Anzac day, to the amusement of your friends.

As for me, my Pop, Donny, Mick, Mal, Shorty, Johnno and all the others will be in my thoughts, no matter what day it is.

Ahhh, cause showing up, and watching respectfully does not do this?

+ 1 to p1 and Thumper. I have family members and good friends that have seen combat and who march. I’m yet to speak to one of them that thinks this is a good idea. I could see this thing gaining traction in the US (like the POW/MIA campaign) but not here.

One of the RSL’s worst ideas.

Oh god, that time of year again. No doubt the “debate” will soon start about whether children should be in the march. Could we just go forward to the first of May now, please?

I have shown my respect and said thanks many times. I donate each year directly to the RSL. I attend the dawn service and watch the march at Anzac Pde every year since I can remember proudly wearing the medals of Kaos snr snr snr (one of the first KIA at Gallipoli).
Why do I need to NOW have to buy a t-shirt to show my appreciation of what he and other diggers have done for us. Apologies but I just think this is someone jumping on the bandwagon to make a buck, I for one will not be buying one of these shirts.

Ahhh, cause showing up, and watching respectfully does not do this?

Perhaps not totally tacky, since the money goes through the RSL, and the shirts look kinda tasteful. But still totally unnecessary in my mind. Record numbers of people turn up to the dawn service in Canberra these days, why does it need more promotion?

Perhaps not totally tacky, since the money goes through the RSL, and the shirts look kinda tasteful. But still totally unnecessary in my mind. Record numbers of people turn up to the dawn service in Canberra these days, why does it need more promotion?

Please don’t wear one of these to an ANZAC Day march.

I think it’s a great idea! I’ll be buying one. Our troops deserve respect.

Please, please let this be an April Fools thing. That is terrifyingly tacky!

I wonder what percentage will actually be donated

Please, please let this be an April Fools thing. That is terrifyingly tacky!

and only spoiled by the intoxicated bloke who started off sitting at the merry go round swearing, but came over to enjoy the proceedings.

Jacqui Donegan - 13 hours ago
Cooleman Court could (again) be a wonderful local precinct ... but it’s a mess - no parking, scrappy streetscaping, and a s... View
Angela Davey - 16 hours ago
Why not open shops in Coombs. Wright Denman Prospect before building more car parks. View
News 9

Conrado Pengilley - 13 hours ago
And how big is your risk fund on your investment property? View
Ashley Latimer - 1 day ago
Imagine investing in property and not having a risk fund set up lmao View
News 35

@The_RiotACT @The_RiotACT
After a summer we’d probably rather forget, it’s time to turn the clocks back one hour as daylight saving ends https://t.co/JE6xNqRFsZ (4 hours ago)