Are you ready to be Enlightened?

It’s the best time of year again when the evenings are warm – but not stifling, with a cool – but not cold breeze; allowing everyone to come out after dark to explore Enlighten.

For those who don’t know or those new to Canberra, Enlighten is an annual event similar to the popular Vivid event in Sydney where beautiful, colourful images are projected onto some of our most famous national institutions right here in the capital. 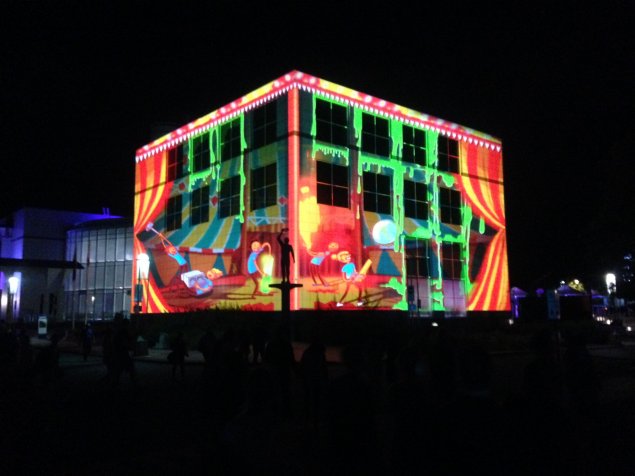 The event started in 2011 (the year I moved to Canberra – I remember thinking ‘oh my god Canberra is so cool! There’s nothing like this at home!), but numbers were quite low with less than 9000 people attending. 2012 improved a little with numbers around the 30,000 mark. However in recent years this number has surged reaching 115,000 people in 2013 and over 131,000 in 2014. This year Enlighten is paired with the night time noodle markets in Reconciliation Place. If the crowds on the weekend were anything to go by, I think 2015 will smash attendance numbers out of the park.

I went along to Enlighten on Saturday night, and although a lot of the projections are the same as in previous years, I was still totally stunned by how amazing our institutions look lit up.

Parliament House is always a favourite. With so many wide pillars it’s fun to watch kids and adults alike creating fun shadows and clever shapes with their hands. 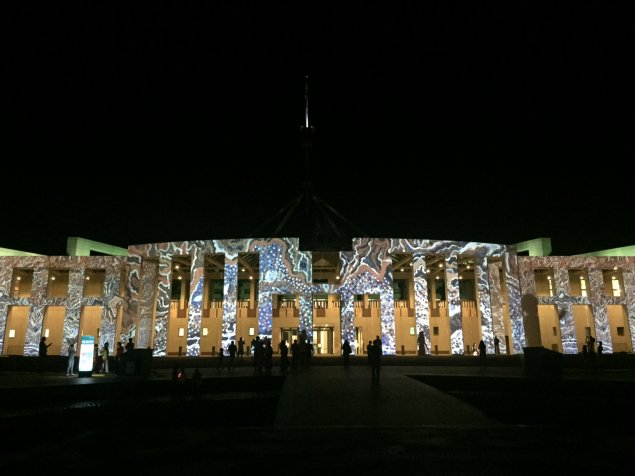 After the big House on the Hill I wandered down to the smaller house at the bottom of the hill – Old Parliament House. This building is soooo wide it’s pretty much impossible to see every projection as a lot of them have multiple cartoons per projection so you would probably have to stand in different parts of it for about half an hour to see everything. If you’ve got a free evening though, it’s worth it.

By this time we’d started to get a bit peckish so we wandered down to the noodle markets and I got all excited about the giant light-up cat. With a plate full of yum cha we ventured to Questacon. This was very cool. I don’t think I’d seen any of these projections before and they were bright, colourful and interactive! None of the other projections I saw moved like these ones did. One of the projections reminded me of an old Windows ’95 screensaver. 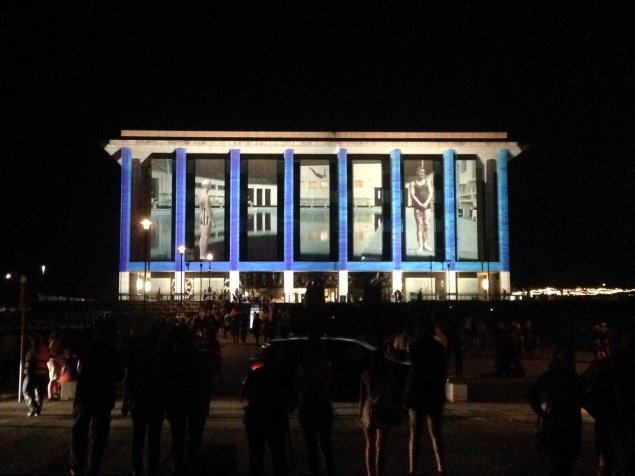 The National Library was up next. I didn’t stay there for long as there was a LOT of people and it was hard to stand and actually admire all the projections for more than a couple of minutes. Nevertheless, it was great – as expected.

I completely forgot about the Portrait Gallery and started the walk back up to Parliament House with the intention of checking out the National Archives on the way. A few years ago, the Archives had an amazing setup with two chairs and an iPad out the front – you played interactive Snake (like the old school Nokia game!) on the iPad but you would watch the wall of the Archives rather than looking down at your hand movements. Lots of fun. However when I got to the Archives they weren’t lit up. I must have been too late!

Overall, Enlighten was awesome – it always is. It has such a good vibe to it – everyone is out with their families and friends, breathing fresh air, getting some exercise, and this year indulging in delicious food as well. I reckon I’ll be back once or twice more before the projections are switched off for another year.

SP Brogues - 1 hour ago
Barr will approve no doubt because well you know Geocon and him are best buds. View
Phil Hopkins - 14 hours ago
Enough!!! View
Motoring 9

Bec Kelly - 6 hours ago
I think the issue is that the Canberra Times wrote the article - they are after a head line and people to pay for their subsc... View
Business 9

Steve King - 10 hours ago
Rip Mark he was nice guy always welcoming my condolences to all his family View
Catherine Seaglove - 11 hours ago
RIP Mark What a rugby player he was !... View
News 26

The man known as "Witness J" was tried, sentenced and jailed in total secrecy, during one of the most extraordinary...
News 1

@The_RiotACT @The_RiotACT
For the first time in months, the RiotACT #GigGuide includes gigs that you can actually attend in person as the city slowly begins to open up again https://t.co/FfivcUcpXv (6 hours ago)

@The_RiotACT @The_RiotACT
As temperatures fall, fire risks rise. @ACTFireRescue has reminded Canberrans to be fire safe as we unpack our electric blankets and plug in heaters https://t.co/913CVlZIvu (7 hours ago)