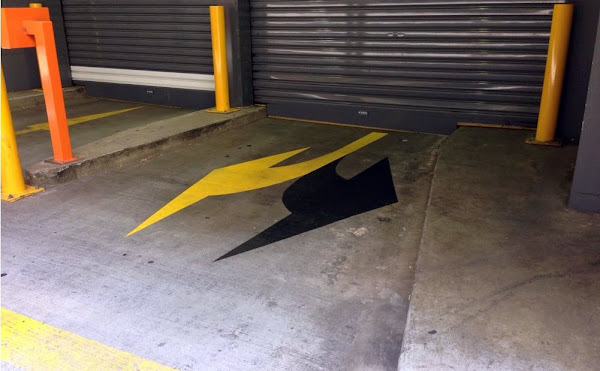 Earlier this year a rogue photographer posted an image of the ATO’s double standards when it comes to traffic laws. The photograph depicted the ATO’s car park in Civic that exits into a one way lane. The arrows painted on the car park exit suggested ATO staff could ignore the official one way signage.

The ATO have seen the RiotACT’s exclusive story and have acted.

Nice colouring-in between the lines. But why?

Not enough paint to make a square?

So now black people can turn left, but yellow people have to turn right? What about us pink folk?

Jim Crow all over again…

I choose to turn to the dark side.

So now black people can turn left, but yellow people have to turn right? What about us pink folk?

Somebody lend them a high pressure hose.

@The_RiotACT @The_RiotACT
The ALP's been in charge for almost 20 years but health has remained a constant sore point for successive Labor governments. Why? https://t.co/aGuaozRh3c (40 minutes ago)