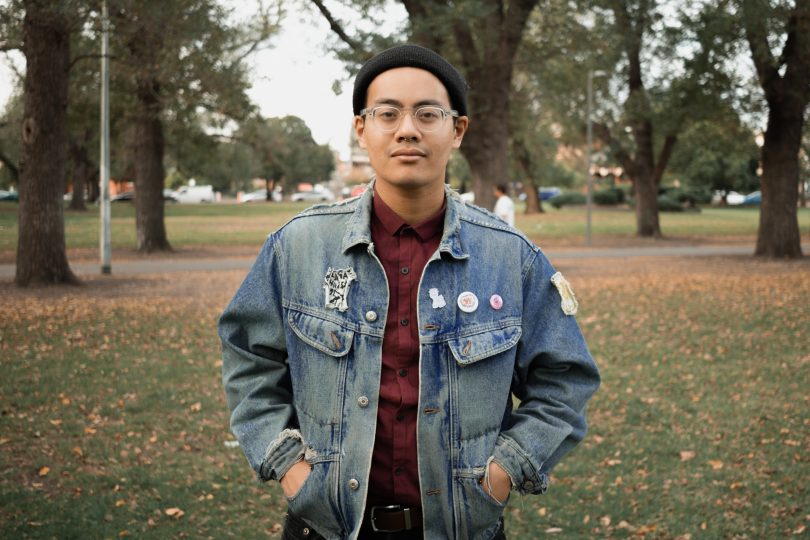 Azim Zain is back, and back in style. The creator of Canberra supergroup Azim Zain and His Lovely Bones has released a new track under the moniker, and is ready to get back into the game.

“I started recording this over a year ago, and delays kept happening, life happened. But yeah, it’s the first thing I’ve written and recorded without my old backing band,” Zain says.

‘Passenger Seat’ is a throwback to Zain’s emo, punk, hardcore musical upbringing, with the move from writing as a band to writing solo allowing for a new direction in sound.

“It was a very different experience working just me and a producer,” he says. His producer, Fletcher Matthews, has worked with Dear Seattle, Clews and Canberra locals Sputnik Sweetheart in the past.

“But I think it was also good, it helped focus the direction of everything. We really talked a lot about what we wanted to go for with this – it’s quite limiting in a lot of ways, because I’m not that good of a singer, or guitar player, or at arranging stuff,” he laughs.

The supergroup, which has consisted of various Canberra musicians including Ella Hunt and Tom Douglass, was a fixture in Canberra for years. Zain has nothing but praise for the songwriting process with the band as a whole, “but yeah, I think it’s really helped change the vibe up, and maybe that’s what I needed”.

Zain has been out of Canberra for a while now but continues to hold a soft spot for the city.

“Obviously Canberra is a huge part of what made me a musician. I wouldn’t be where I am today if not for the community I found and helped support me in those early days,” he says.

“And you know, I’ve always been big on giving back to the community in some form or other, be it booking local artists to do my artwork [local graphic designer Beniah Coulburn designed the artwork for ‘Passenger Seat’], or getting local photographers to do my promo shots, and yeah, just booking shows for local bands, especially newer bands who may not necessarily have much in the way of opportunities to start off. Canberra is a big deal for my life.”

And not just musically.

“I do feel like this sense of longing now that I know that the Burmese Curry Place has reopened,” he adds. “My regular order is always, I’m not sure what the actual number is, but it’s always egg and fishcake. I don’t know what they do, but as a combo it just works.”

The new single has been positively reviewed on Triple J Unearthed and is now out on streaming services. Zain is thrilled with the reception.

“When I recorded ‘Passenger Seat’ last year, I did that as part of starting work on a big full-length record, and I think that’s sort of like, once again, like ‘Passenger Seat’, it took a real break for a long time due to personal circumstances. Now, getting ‘Passenger Seat’ out has really galvanised me and motivated me to get back into it.

“So yeah,” he says. “Getting back into working on that with my producer, and hopefully there’ll be more to come in the new year!”