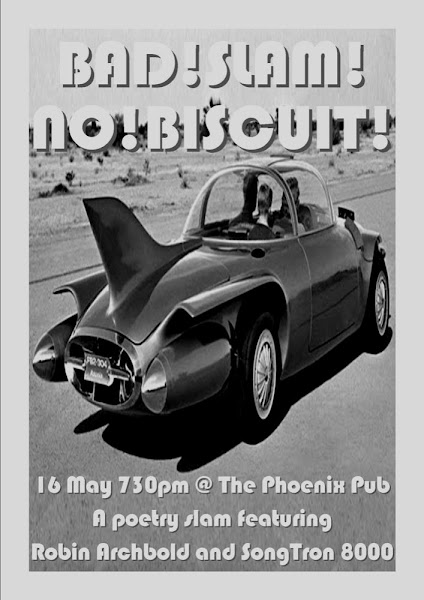 THIS IS THE BAD!SLAM!NO!BISCUIT! MAY 2012 SPECIAL EDITION INVITATION

Because we want you onstage with your 2 minutes, your original material, and your no props

ALL SO YOU CAN WIN AT LEAST ONE OF OUR THREE, FOUR, MAYBE FIVE FIRST PRIZES

You are The Batman

Yes, prizes, if you win we won’t send you to perform for some totalitarian regime, but that’s okay

No, instead we give you special prizes, maybe things from SOMEONE’S BACKYARD, maybe things broken in IMPACT COMICS, maybe things no person wants to buy in MIND GAMES, maybe something free that they can’t sell at SMITHS ALTERNATIVE BOOKSHOP, and maybe a tasty bbq’ed thing from GORMAN HOUSE MARKETS, who knows?

BUT IT IS ALL ABOUT NOT COMPROMISING YOU

So typically these invitations are verbose, extended, drawn out and non-sensible or nonsensical, but because this month is a very special month the invite is not any of those things, no

Being not that, it, this invitation, is now going to tell you about the feature acts

This month we have two feature acts, YES TWO

She is the Batman

But not to be outdone by bringing the age old enemy of the Doctor to BAD!SLAM!NO!BISCUIT!

We also have ARCHIE (aka Robin Archbold)

“Robin Archbold has been variously described as electrifying, heartbreaking, wonderfully romantic, hilarious and inspirational, and is the only performer ever to have won the Woodford Poetry Slam and the Woodford Storytelling Award. Equally at home at outback poets’ breakfasts, late-night burlesque bars in the cities or the main stage at the Sydney Theatre Company, he can entertain and move your mum, or the boffins at the biggest poetry festivals in the country. He’s a multi-slam winner, multi-festival feature performer and workshop presenter extraordinaire. You never know where the ride will take you, and you won’t care.”

YES, that is correct, both ROBIN ARCHBOLD (aka ARCHIE) and the SONGTON 8000

We are The Batman

So join The Master of Conflict, JACINTA, The Score Adder, Andrew Galan and The Sacrificial Poet at the Phoenix for a 730pm signup for your original words with no props or music on stage for two whole minutes to win prizes, prizes, prizes

Listen to The Batman.

Carly Maree - 32 minutes ago
I love how people act surprised when this city has some of the worst crime I’ve ever encountered? I lived in Sydney for 8 y... View
theroundone - 12 hours ago
Who's getting punished, though, asides from law abiding rates payers in this city? A racial or sexist epithet is treated more... View
Opinion 15

Colette Robinson - 3 hours ago
As both a pedestrian and cyclist on shared paths, I am so sick of the arrogance, double standards and behaviour of certain cy... View
Peter Major - 3 hours ago
get then off the road would be progress View
Aleksandar Vujić - 5 hours ago
Anthony Olivera gives cyclists somewhere to ride so they don't share the footpath with people, wont give motoring enthusiasts... View
News 1

HiddenDragon - 4 hours ago
The report aired on ABC Canberra news tonight about the devastating impact of the hailstorm on important crop resilience rese... View
News 12

mark boast - 5 hours ago
Why the rage against e-scooters? I ride the paths a lot on my bike and for the most part I see people behaving well and enjoy... View
Food & Wine 28

Rohit 'Swarley' Singh - 8 hours ago
The old demand a 50 upfront then charge you cause you're cooked again View
Buck Johno - 21 hours ago
From what I remember of night rider busses it was only over summer. View
News 7

@The_RiotACT @The_RiotACT
The Dirty Sunflowers will be joining Slagatha Christie & Highland Light on stage this week. Find the details in our latest Gig Guide https://t.co/dJxSjsQRbd (2 hours ago)

@The_RiotACT @The_RiotACT
Multicultural Eats: Where to find the best Indonesian food in Canberra https://t.co/v5lPRYRs5P (3 hours ago)

@The_RiotACT @The_RiotACT
The ACT Government's about to launch its biggest-ever domestic tourism marketing campaign. What experiences would you promote to Australia? https://t.co/Oe3GbmEsGw (5 hours ago)