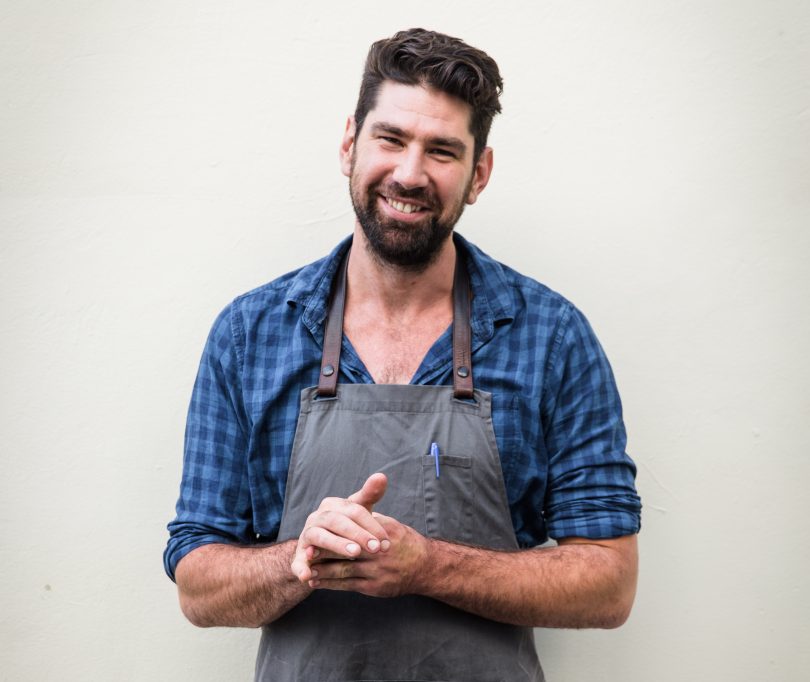 A former public servant who swapped international relations for home-grown cuisine has been named a finalist in the Best New Talent category of the Gourmet Traveller Restaurant Awards.

Three years ago, Bar Rochford head chef Louis Couttoupes spent a day in the kitchen of a Paris restaurant, terrified yet thrilled, and came home to Canberra knowing where his future was.

And it wasn’t writing briefing papers in Prime Minister and Cabinet offices.

He got in touch with someone he knew when the bar in the Melbourne Building was opening in March 2016 and started at the bottom washing dishes, but was also told to bring a nice pair of pants so he could be a waiter on Friday and Saturday nights.

Over time, he spent more and more time in the kitchen until, when the head chef left, owner Nick Smith tapped him to take over.

For Couttoupes (no, he’s not French but from Greek extraction) it was an instinctive feeling in the kitchen that made him feel at home.

He grew up in the inner west of Sydney in a family that always loved food and cooking, and he started exploring and testing the boundaries at home.

It was a friend who really set him on the path to change and gave him a new focus on food.

“She saw something in me and encouraged me to try to do something different,” he said. “She talked me into the Paris kitchen and expanded my horizons when it came to food,” he said.

Muse, chief critic and fan club – he says he wouldn’t be cooking without her.

This willingness to experiment is reflected in an inventive, innovative but unpretentious menu that relies heavily on the quality of locally grown produce. 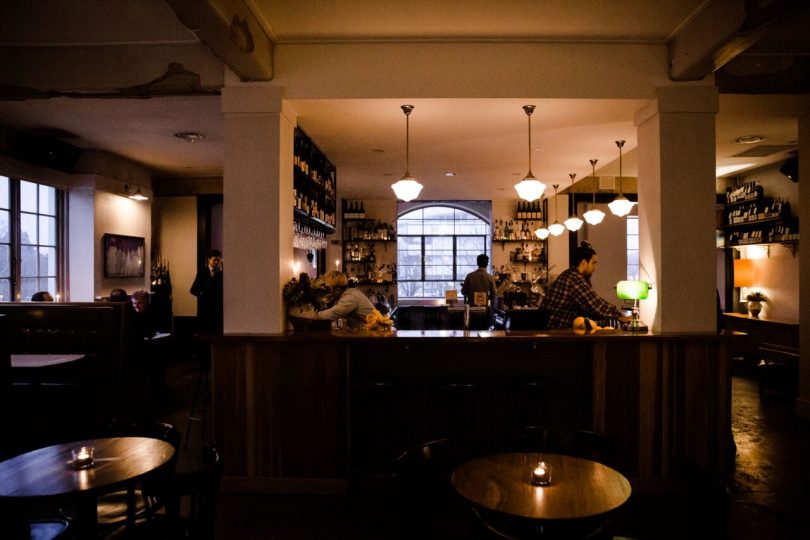 “We work locally with producers who grow really great stuff. We try to work seasonally with them and because we get such great produce, we don’t need to be fancy – we just cook it honestly and simply,” he said.

The kitchen is also a place where ideas are encouraged to percolate and other staff, who have also come from different walks of life, contribute.

And Rochford is primarily a bar where a broad range of clientele come to have a good time.

“What we’re trying to do is break down the barrier between somewhere you come and have a great time with mates, or the DJ comes out when they’re playing soul on a Saturday night, we want to retain that, but we also want to be somewhere where people can come and just settle in with out of town friends or mum and dad on a special occasion and have decent quality food,” Couttoupes said.

Vegetables have a strong presence on the menu and Couttoupes takes pride in doing the unexpected with them and creating new experiences for people.

It fits with the Rochford culture where the wines aren’t from the usual suspects and the cocktails are classic mixes with a twist.

Being a finalist came as a shock to Couttoupes, who acknowledged the great things being done around the country but also here in Canberra in recent years.

“Hospitality in Canberra has changed beyond recognition, places are opening up with really creative, interesting guys and girls doing amazing things,” he said. 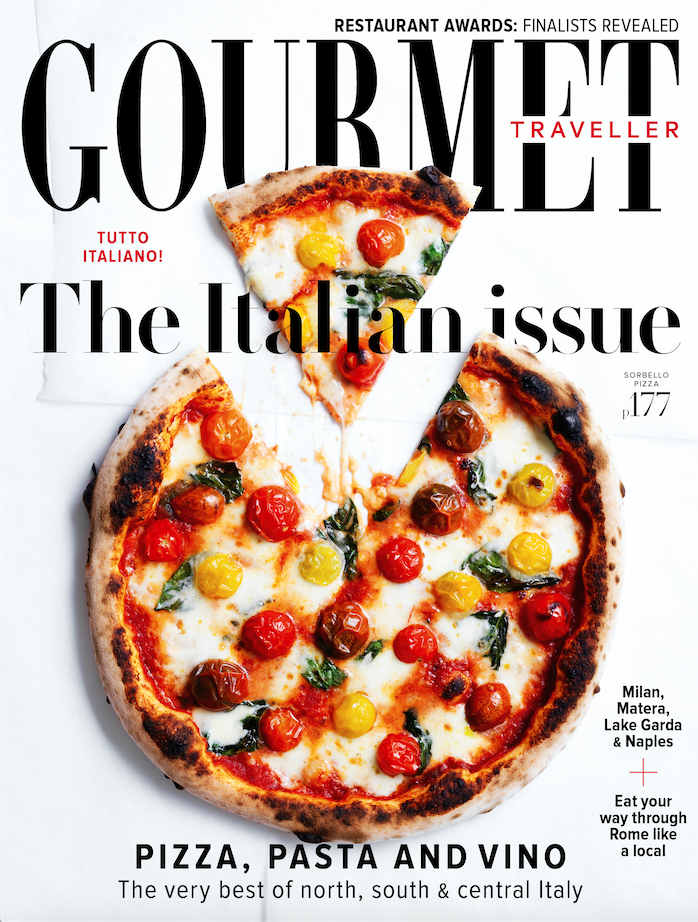 Winners will be announced and celebrated at an exclusive awards event held on Wednesday 22 August in Sydney at the celebrated French brasserie Restaurant Hubert, and published in the new edition of Gourmet Traveller’s annual Restaurant Guide, presented by Vittoria Coffee, on sale with the September issue on Thursday 23 August, 2018.

The coveted Restaurant of the Year award will be announced on the night, along with the peer-voted Chef of the Year and Outstanding Contribution to Hospitality.

New Restaurant of the Year

Bar of the Year

Maître d’ of the Year

Sommelier of the Year

Regional Restaurant of the Year

John McAvoy - 8 minutes ago
thoroughly debunked only by the greens party. The rest of us are well aware of the changes to the environmental act. Which we... View
Jim Hosie - 1 hour ago
Malcolm Street try Google 😉 and as I said reread my post. View
Peter Mackay - 5 hours ago
Malcolm Street I think trams are an old solution to a problem that every city faces and will face. I think that long before C... View
News 41

Lyndon Ogrady - 21 minutes ago
Haha we decided to sell our investment property for these exact reasons. One less available for rent View
Jesse Ward - 28 minutes ago
Tania Shaw don't pay land tax unless you are renting it out. View
bj_ACT - 4 hours ago
Who would have thought there would be a direct correlation between extra ACT Government property charges through annual rates... View
Food & Wine 22

Amy Jones - 1 hour ago
Britt Shephard shall we attend for a few ciders?? 👍🤷‍♀️ View
Community 19

Bente Hart - 2 hours ago
Susan Nicholls 1kg sugar to 2L water heat gently until sugar is dissolved. Cool down. Poor into shallow tray with straw or th... View
Capital Retro - 8 hours ago
There are definitely more bees than flowers in my garden this season. I think the urban situation will improve but it's prett... View
Susan Nicholls - 9 hours ago
Bente Hart How do you make sugar water? View
Community 39

Caul Fer - 3 hours ago
Tarian Dixon no View
Shannon Lister - 9 hours ago
Michelle Brown your famous. View
Annabel Dobson - 9 hours ago
That’s simply not true. You can see very clearly the damage Brumbies are causing when you ride through KNP. We know scienti... View
Business 6

Malcolmo Oz - 8 hours ago
Trudy Jane Even worse Jane (and Betty) - many have never even come here!! View
Trudy Jane - 17 hours ago
Betty Starbux most people who criticise Canberra have never even lived there View
Joanne Hillermann - 18 hours ago
Well done Marg! Congratulations on your awards. I loved listening to you on the radio about quirky archives stuff. View
News 31

Capital Retro - 24 hours ago
Correct. The CSIRO reports show all the details but it's not accessible on a computer so it is not considered. View
May Mac - 24 hours ago
"climate change, or global heating as many are now calling it" Another new term? I thought it was amended to 'climate change'... View
show more show less
*Results are based on activity within last 7 days

The Bureau of Meteorology (BOM) is warning Canberrans of dangerous conditions as heavy rain and thunderstorms begin to make their...
Food & Wine 0

As rain and thunderstorms fall on fire grounds to the west and south-west of the ACT this afternoon (15 January),...
News 1

Saturday marked the 17th anniversary of the 2003 bushfires – events that are still seared into the memory of every...
News 41

The creation of a dedicated continuous lane from the Cotter Road onto Adelaide Avenue will shave up to five minutes...
News 41

"We have never before been under threat east to west, north to south. The whole region has been smashed," Federal...
News 31

Plans to demolish the former Woden CIT campus and build a temporary car park on the site to support the SPIRE...
Community 30

As Canberra continues to be shrouded in bushfire smoke, an expert from The Australian National University (ANU) has released free factsheets on...
News 75

In the midst of the bushfire crisis, one of the other major stories of the season is undoubtedly Summernats. Organisers'...
Opinion 19

The only ACT restaurant to make Gourmet Traveller’s Top 100

@The_RiotACT @The_RiotACT
Piallago avenue heading to Queanbeyan is currently closed, with 2 fire crews on scene attending to a grass fire. The smoke can be seen from the MIT baseball field in Narrabundah. Thanks to Megan-Kate for the photo. (45 minutes ago)

@The_RiotACT @The_RiotACT
With record temperatures & reduced rainfall, #IconWater is urging Canberran businesses - as well as individuals - to reduce their water use. Here are some useful tips https://t.co/qZGl0EeWAz (57 minutes ago)

@The_RiotACT @The_RiotACT
A Total Fire Ban has been declared for the whole of the ACT for the duration of Thursday 23 January 2020. The Bureau of Meteorology is forecasting hot, windy conditions with temperatures predicted to reach 33 degrees. Areas of dust haze are possible. https://t.co/WSd07pHupd (1 hour ago)