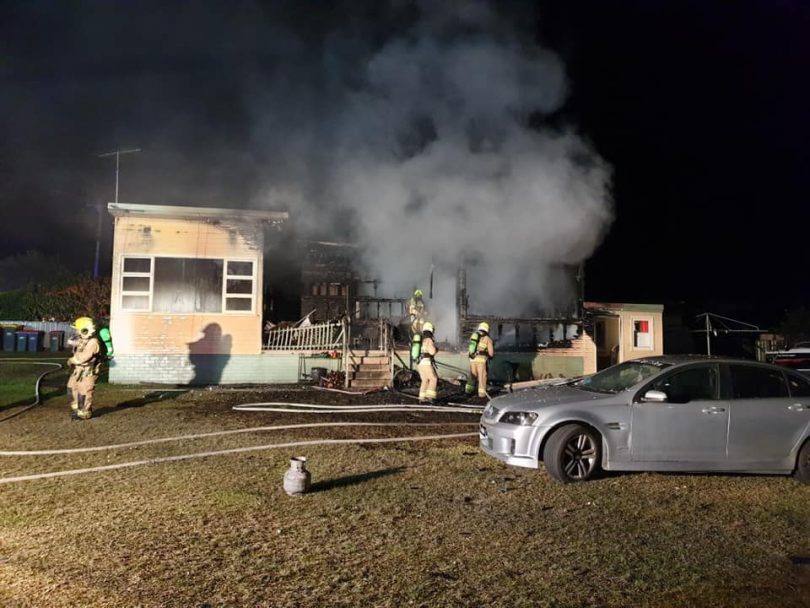 A Batehaven woman has been charged with domestic violence following a building fire late Saturday night.

Police report that at about 10:40 pm (July 20), emergency services were called to Peter Crescent, Batehaven with reports that a residential building was on fire.

Officers from South Coast Police District arrived to find a distressed 45-year-old male with injuries to the right side of his head, believed to have occurred before to the fire. He was treated at the scene by NSW Ambulance paramedics.

A 55-year-old woman was conveyed to hospital with possible smoke inhalation.

Fire and Rescue NSW attended and extinguished the blaze; however, the building was destroyed. Rural Fire Service volunteers from Batemans Bay and Surf Beach also attended.

Neighbouring properties were not evacuated.

The occupants of the second unit within the building escaped the blaze uninjured.

The site was handed back to police at around 1:30 am and a crime scene was established.

On Sunday, when the woman left hospital she was charged with two counts of assault causing actual bodily harm. She was served with an apprehended domestic violence order and will appear before Batemans Bay Local Court on July 29.

It is believed the fire started in the bedroom of one of the two units, however, the cause of the fire is yet to be determined. Investigations continue.

Anna Ji - 8 minutes ago
He deserves a pedestal for his sport. His views should not impact that, especially when it's just his perceived views by one... View
Vasa Krculj - 11 minutes ago
Novak, a great sportsman and a generous human being who donated $1 mil. to the NSW bushfire victims. He must be the first spo... View
Evan James - 8 hours ago
Well said, Tim!✔ View
Community 107

Steve Aust - 37 minutes ago
Colin Parton tell 1 story here View
Louise Flint - 1 hour ago
James Daniels I was sent there for advice before I took a redundancy package. They ignored my superannuation and taxation que... View
Patrick Barrett - 5 hours ago
Dylan your fault View
News 22

@the_riotact @The_RiotACT
You're #vaccinated and #boosted, you wear a mask, socially distance, wash your hands and sanitise, but as Zoya Patel discovered, you can do all the right things and still get #COVID https://t.co/LTSsyklfol (8 minutes ago)