Behold the future of Super Rugby 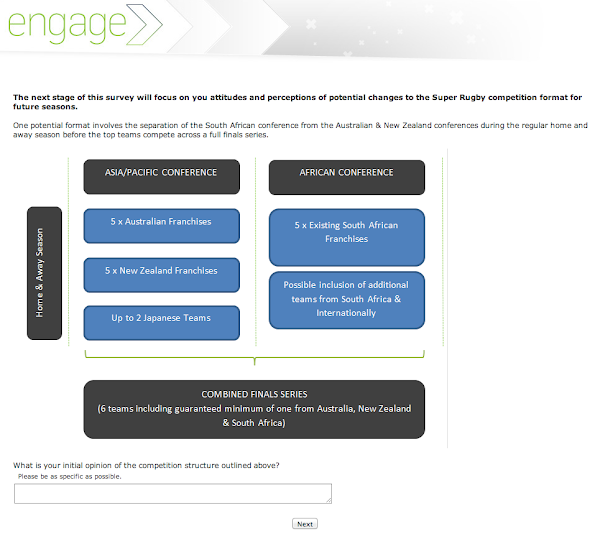 Yesterday I got emailed asking if I’d complete a survey on the future of rugby.

Included was this proposal which they asked very pointed questions as to how I’d feel about it and whether it would get me watching more.

In that it provides a future for the Brumbies I’m quite pleased too.

I understand the thinking, but well if South Africa don’t want to travel over to here, then just sever the ties. What gets me is when South African sides play in Australia at say 7:30pm, its on a TV in South Africa at more palatable 9:30am. The reverse means we get 2 and 4 am games. We could probably add a few teams from Japan, the pacific and maybe Argentina and go back to a super 12 or 14 easily enough.

I got the same email. The only things I can think of that would be advantageous for Canberra Super Rugby fans with this proposed model are:

(1) more televised games in watchable time slots, with the additional benefit of better sponsorship bargaining;
(2) no need to play those pesky South African sides in regular rounds;
(3) the ability to play sub-par Japanese sides as part of our home and away fixtures so we improve our odds; and
(4) better chances of avoiding 30,000 kms of travel in the last three weeks of the season should we make it into the finals series.

Actually – on those four points it doesn’t seem like such a bad idea. At any rate, SURU have been muttering about pissing off from Super Rugby to join the 6N for years because of time zone issues with travel and television sponsorship. And it seems a tad weird that this survey came from the Brumbies and not the ARU – who send me surveys like this every so often as well.

And the television rights aren’t up for negotiation until the end of next season anyway, so who knows where this will all end up.

Perhaps the Rugby bosses should stop their delusions of grandeur and address problems closer to home such as declining crowds and our laughable Wallabies team.

True that. Grassroots is almost dead in Australian rugby. Perhaps throwing a few Super Rugby derby fixtures on to free-to-air would be a good start? There were no questions about that in the survey.

Oh dear, it sounds an awful like the “vision” John Ribot and Rupert had for the failed Super League in the 1990s. You remember, we were promised a State of Origin every week and that kids in Beijing would soon be putting posters of Allan Langer on their walls. Perhaps the Rugby bosses should stop their delusions of grandeur and address problems closer to home such as declining crowds and our laughable Wallabies team.

Tim Hough - 7 hours ago
That's some crazy conditions. I'd only find them borderline acceptable if we were guaranteed a Matildas match, but even then... View
Property 17

Tom Rilly - 10 hours ago
Why should the govt step in just because a developer stuffs up??? View
Lifestyle 31

Rob Thomas - 11 hours ago
Gabriel an Australian politician? Oh he probably is. View
Russell Nankervis - 13 hours ago
Lol a Liberal saying others are killing democracy. How ironic. View
Charlie Church - 14 hours ago
Sheridan New honestly would trade it for anything right now. View
News 4

HiddenDragon - 11 hours ago
It's reassuring to know that people who have experience in administering electoral laws are skeptical about the workability o... View
russianafroman - 12 hours ago
Well said. I wouldn't describe it as worrying, rather irrational and destined to be either abused or completely ignored/circu... View
russianafroman - 12 hours ago
Unless we're talking about something grounded in science it will be very hard to confirm that something is false or not. Even... View
News 9

Murray Emerton - 11 hours ago
Why can’t we get direct flights from Canberra to cairns. I would be on that!!!! View
News 14

chook58 - 13 hours ago
The RIOT article is more propaganda by the ACT Government. As a front-line protester and eye-witness there is nothing "humane... View
Community 1

@The_RiotACT @The_RiotACT
The Liberal and Labor candidates are neck and neck in Eden Monaro as the vote goes down to the wire and preferences run wild https://t.co/dG673PvvM6 (6 hours ago)

@The_RiotACT @The_RiotACT
Local jewellery designer Krystal Hurst is a proud Worimi woman who uses her creations to provide a sense of freedom and to connect with her culture and ancestors. She is a finalist in the Telstra National Aboriginal and Torres Strait Islander Arts Awards https://t.co/MtPLGJ3WwH (8 hours ago)

@The_RiotACT @The_RiotACT
Canberra's residential property market has posted a 6 per cent rise in home values for the financial year despite the COVID-19 economic downturn, according to the latest data from CoreLogic https://t.co/wYoWLboKSL (10 hours ago)