Brumbies scrum will learn from Reds domination according to Cusack 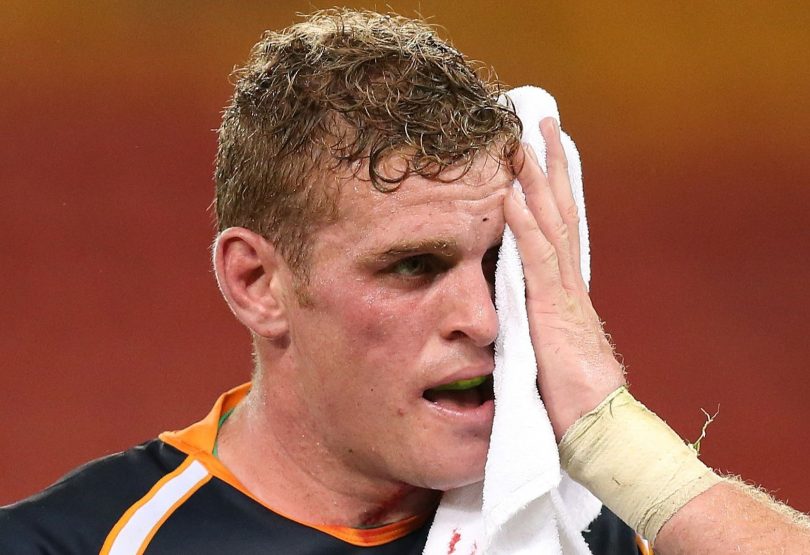 Tom Cusack had 10 stitches put above his left eye after a knock against the Reds. Photo: Supplied by Brumbies.

The Brumbies were dominated where they pride themselves the most against the Reds and the Canberra side promise to make it right against the Rebels on Friday night.

Backrower Tom Cusack said the Brumbies have focused on fixing their set pieces during training this week before they come up against the undefeated Melbourne Rebels.

“The disappointing part of the game was our set piece and what we pride ourselves on as a club and a franchise, and to be dominated in a scrum and a set piece format was something that we have definitely focused on this week. We are going to be a lot better and stronger by that and we can only get stronger by facing adversity and we were shown up by the Reds in that format.”

The 24-year-old, who had 10 stitches put above his left eye after a knock against the Reds, said the Canberra side was disappointed with the points they left out on the field against the Reds.

“We were pretty disappointed about how many points we left out there. Reviewing the footage, there is a lot of opportunities that we can score tries and we are just not taking at the moment. I think that’s the confidence we are trying to grow amongst the group and try to build amongst each other to take those little risks and opportunities when they arise.”

What was their strength turned into their weakness as the Brumbies were dominated, which didn’t sway Cusack from believing they have the best scrum in the conference.

“We are learning along the way. We learnt from the Sunwolves and took some great learnings from the Reds and I think it’s going to put us in good stead against the Rebels.”

The born and bred Canberran said that Sio’s return to the side will give everyone confidence.

“Everyone takes confidence in seeing your big names come out and play. By all means, he is the best loosehead in Australian rugby and he is definitely one that we would like to have out there. His longevity in the competition is far more important than getting him back to play against the Rebels, so it’s a decision they have to make about that. We have full confidence if he gets the nod he will be fit and ready to go.”

Watch the Brumbies against the Melbourne Rebels in Super Rugby round four action at AAMI Park on Friday 7:45 pm. The match will be live on Fox Sports.

Pauly Berger - 2 hours ago
Fantastic concept, visionary thinking your community should be embracing, congratulations AFC View
Gordon Arthur Truesdale - 3 hours ago
Good one!, Garry, when the machines were first mooted, I asked Lionel James about them, suggesting they would take over the c... View
Denise Bourke - 3 hours ago
Not a blessing for those supposedly buying the homes for aging. Very creative and imaginative but hardly a good match. View
News 12