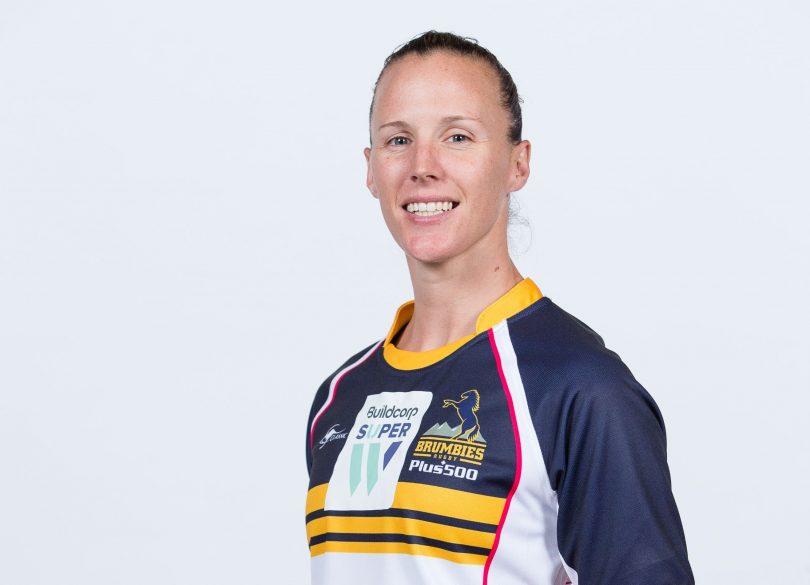 Milward was forced to sit on the sideline last week with an injury. Photo: Supplied by Brumbies Rugby.

Brumbies Super W skipper Shellie Milward is back into the starting XV and is eager to get back on the paddock in search of the Brumbies first victory.

Milward said she was itching to get back on to the field to help the team chase the evasive W and to visit Melbourne for the first time.

The Brumbies backrower was forced to sit on the sideline last week with an injury, and even though she ran water and messages for the girls, she was left pulling her hair on the sideline.

“Sitting on the bench nearly killed me. I think I lost my voice and nearly my mind sitting on the sideline last week, but it is a good perspective and good to sit there and take away some things to help the team at halftime with some pointers and going forward,” Milward said.

“On the sideline, you do get the opportunity to open up and see where circumstances may arise and opportunities pop up. It does get you to take the blinkers off and have a look around.”

In the Brumbies first two matches, the Canberra side was made to suffer for their ill-discipline and was punished for having a player sent off in both games.

Milward was the offender in the first match against the Reds, spending the last 12 minutes on the sideline after receiving her second yellow card.

The skipper believes that ill-discipline could be a competition changer in the short four-game season.

“In two games we have had two players sent off, so discipline is a big thing for us. We will have a chat this week about that and that is something we want to focus on,” Milward said.

“It has a huge impact, with ten minutes or more losing a player, in this kind of competition that can be a game changer and a competition changer.”

Head coach Tony Doherty is without senior players Charlene Gubb and Kate Brown for the match, both out with injury, along with utility back Cecilia Smith and forward Courtney Frankl.

The coach was forced to make five changes to the team that was beaten by NSW at Warringah Rugby Park, with prop Violeta Tupuola back into the starting XV, alongside lock Michaela Leonard, scrumhalf Remi Wilton and flyhalf Kiara Meredith-Brown.

The match will be played as the first half of an AAMI Park doubleheader, before the Rebels vs Hurricanes Super Rugby game.

The Brumbies’ women take on the Rebels at AAMI Park on Friday (30 March), kicking off at 5 pm AEDT, to be broadcast on Friday night at 10 pm AEDT on FOX SPORTS 505.

chewy14 - 2 hours ago
Jorie, Why would I imagine such a thing when it isn't close to reality? As I've said above, the vast majority of people aren'... View
jorie1 - 3 hours ago
Assume there are 300 rental properties in Canberra. And 3000 people looking for a rental property in Canberra (these Canberra... View
Ophellia Knobbs - 3 hours ago
Banning short term/Airbnb in certain areas like Civic & surrounding suburbs would. View
Lifestyle 1

@the_riotact @The_RiotACT
With more and more families and low-income earners being squeezed out of Canberra's rental market, Community Housing is providing solutions. @APW_ACT highlights the number of ordinary Canberrans facing rental stress and the need for more affordable housing https://t.co/xSlGC5HKMZ (1 hour ago)