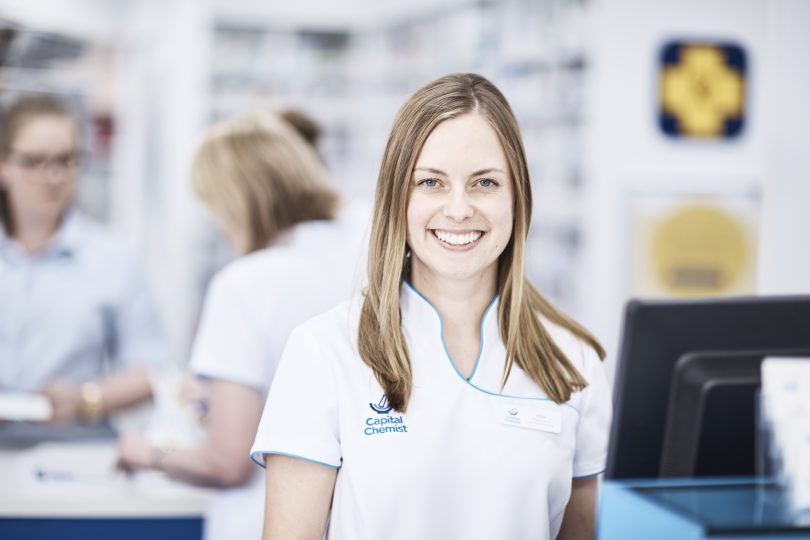 An inspiration to young pharmacists: Elise Apolloni is bucking the trends in the pharmaceutical industry

Such an impressive achievement ­– and all before the age of thirty! ­– warranted an investigation as to how and why this young pharmacist and business owner is bucking the trends.

What we do know about the Capital Chemist group is that it was started by Roger Tall and his partner 30 years ago and that its primary focus is serving the local community. The group is also responsible for several philanthropic award programs like ‘The Minister’s Reading Challenge’, the ‘Year 10 Science awards’, and many other community-based initiatives that give back or add value to the community.

In the book, Canberra Business Success Stories, Roger tells the full story. He attributed the secrets of the Capital Chemist group’s success to “the value of partnership and respect for customers, partners and staff too”. This is the vein that runs through the chain even today.

It is in this milieu that Elise Apolloni’s 15-year pharmacy career was nurtured, and it is clear that the Groups’ ethos has rubbed off on her own outlook on business.

Roger Tall was there at the Awards night and proudly told us he hired Ms. Apolloni when she was just 14 years old. Thanks to the “work experience program” at Caroline Chisholm High School (where she was a good student and had a curiosity for science), Elise had the choice of working at a video shop or a pharmacy, and she apparently chose the right one, given her career progression ever since. She spent the rest of high school and University working between the pharmacy at Calwell (where she gained her work experience), and Wanniassa. Then, four years ago she became one of the three partners in Wanniassa and today she’s also a partner in two other pharmacies.

You don’t have to be chatting with Elise for long before it is obvious that she is astute, loves her community and is passionate about her work. Not only that, she is also a giver, and because she has had the good fortune of many opportunities to get to where she is now, Elise’s future aspirations are centred around giving others on her team equal opportunities, and a chance to shine in their own right.

“These awards are not just about me. There are many good staff here who often do great things, above and beyond the call of duty, and I am ever so proud of all of them. We are a really good team and it’s a joy to come to work.” she pointed out.

Elise is also married to a pharmacist, so her whole world is centred on all things pharmacy related. She keeps up her education, (an important mandatory job requirement), and often helps out at Lifeline, as she has a special interest in mental health issues. Elise spends time speaking to community groups about mental health issues and in 2015, when the pharmacy suffered the loss of one of their own young assistants to suicide, her passion was further ignited.

“We need to talk more about mental health issues in our communities,” she said. “They are illnesses you cannot see often until it’s too late, and often because people are reluctant to talk about them. We can and must do something about such tragedies.”

In terms of her work, Elise uses a triage approach at the pharmacy to help the local community with regards to common illnesses and conditions. For example, Diabetes is tackled (in conjunction with Charnwood Chemist) by a dedicated three-part service consisting of a palliative care program, general consulting services aligned with mental health services, and outreach programs. There are also three diabetes educators employed at the pharmacy to further strengthen their services.

Elise is still in her 20s, and as a baby boomer, I was thrilled to know that there are people like her within this younger cohort of citizens – shining lights with a good heart, intelligence, and passion, with strong leadership qualities and a desire to make the world a better place.

Our world is in good hands indeed, with this next generation, if Elise is anything to go by! And don’t you just love a good news story?

Richard Dorothyanne Gurevitch - 15 minutes ago
Good move. View
Jackie White - 53 minutes ago
Poor ducks... There was a lovely little wallaby who resided at the Swedish embassy (around the corner from the Belgians) for... View
Wendy Boyce - 3 hours ago
So awesome 👏 View
News 47

Helen Brinsmead - 39 minutes ago
Lorraine Ruth Savage why not all of them? View
Motoring 1

Capital Retro - 21 hours ago
Well, if they believe that coal fired electricity generation which has been on their doorstep for 50 years is killing them th... View
show more show less
*Results are based on activity within last 7 days