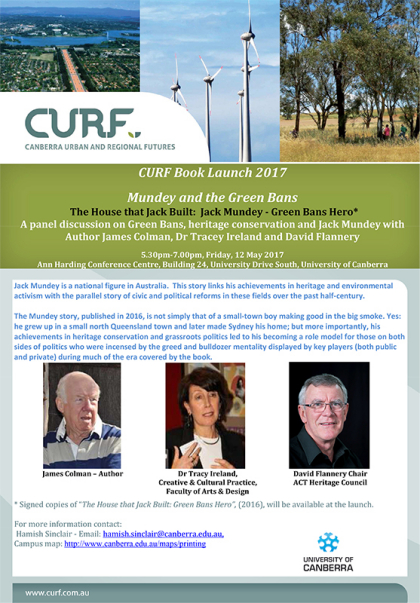 This Friday, 12 May, Canberra Urban and Regional Futures (CURF) is holding a book launch and panel discussion about the biography The House that Jack Built: Jack Mundey – Green Bans Hero, by James Colman.

I picked up and read this biography back in January, when I visited the Demolished Sydney exhibition at the Sydney Museum. The biography tells the story of Jack Mundey, the union leader and urban hero of the 1970s who used ‘green bans’ to save many heritage buildings and precincts, such as the Rocks, that Sydney residents and countless tourists enjoy today.

Mundey and his biographer, urban planner Jim Colman (the latter will be at the book launch), are alarmed at the re-emergence now of planning and development trends that led to a community uprising and ‘green bans’ in the 1970s.

The green bans arose from a realization by Mundey and the union he led, the NSW Branch of the Builders Labourers’ Federation (BLF), that there was little point making money on a construction job if you were at the same time destroying your cultural inheritance, your landmark buildings and your community precincts.

The BLF agreed that they would place green bans on building sites where they were asked to intervene by the public. Mundey would speak with the locals. If at an open public meeting a formal resolution involving members of the affected community was passed seeking union support, the union would seek endorsement by its rank and file and then impose a green ban. Then Mundey would sit down, talk it over again with stakeholders, and negotiate.

What are some of the lessons from the 1970s green bans for Canberra in the second decade of the 21st century?

The first lesson is the need for constant vigilance. If the community is not alert and engaged, our heritage may disappear before our eyes for short-term commercial gain by a few developers and revenue gain by government.

The second lesson is that protection of the “commons” (community land and resources belonging to or affecting the whole community), unites diverse groups opposed to their destruction or sale for private gain.

The third lesson, related to the second, is that there is massive strength from building alliances across community groups and other stakeholders. These alliances help to counter attacks that protesters are a few ‘NIMBYs’ or ‘silver tails’ who don’t like change. Such attacks were levelled at people in the 1970s who protested the destruction of important heritage buildings or precincts. It is a classic put-down and divide-and-rule tactic.

The fourth essential lesson is the importance of genuine community participation in planning. Before making decisions affecting people, government must engage with those in the neighbourhood, other local residents, and workers, and others “in the line of fire”.

Question: Do you think that in the 21st century, unions would be likely to join with residents to save heritage sites?

Details for the book launch:

Micki Beckett - 1 minute ago
Matt Frawley Everywhere. View
Phil Place - 34 minutes ago
Mindless tailgating speeding lane swappers do my head in. Oblivious when you pull up next to them at the next set of lights,... View
Andy Tran - 35 minutes ago
Please just learn the basic 3 things while driving in Canberra. 1) keep left unless overtaking or turning. 2) learn how to us... View
Community 2

nealg - 39 minutes ago
Heavy truck traffic, lack of footpaths and e-scooters not a good mix for Mitchell. View
News 45

Kitty Tsui - 45 minutes ago
I missed out, which is sad because I really wanted to get one of these shirts locally to celebrate my transition from partly... View
Courts & Crime 3

Capital Retro - 56 minutes ago
It was announced in May 2015 that The University of Canberra will be allowed a supermarket, shops and commercial office space... View
Lifestyle 4

Lyn Bailey - 1 hour ago
The story about the ghost walking along the Hume Highway near Lake George is true. I will remember this story for as long as... View
News 16

Capital Retro - 1 hour ago
Don't speculate on unknown unknowns. View
DrLin - 5 hours ago
Foresight serves you well, I received notice yesterday of a 12% increase to the price yesterday. View
Sport 5

Tim Van Der Vlist - 2 hours ago
No discounts for the members for resigning is a disgrace. They have to play on a mediocre (at best) course for 6 months and s... View
Eamon MacDonnell - 4 hours ago
Rowan Kemp Mark Furry Andrew Thorne stills a ways off View
Property 19

Karl Edmondson - 4 hours ago
If only they ate mice. View
Lewis P Owlay - 8 hours ago
I believe you mean the Delta Myna View
Property 13

John Moulis - 6 hours ago
They must have a lot of pull. Even people on Sydney's upper North Shore who want to remove trees which are blocking the view... View
Pam Dovey - 6 hours ago
Margaret Hunt did you see this? View
Run_W - 7 hours ago
Wasn't this the Club that was complaining last month about being broke and if someone put planes on the lake it would mean th... View
show more show less
*Results are based on activity within last 7 days

Motorists involved in collisions with vulnerable road users may face a specific charge and much stiffer penalties if convicted under...
Opinion 114

@The_RiotACT @The_RiotACT
Forrest Tennis Club is one of just three institutions that the Federal Government says has failed to comply with its 'moral obligations' to sign up to the National Redress Scheme https://t.co/71I4Ex10Bk (15 minutes ago)

@The_RiotACT @The_RiotACT
23 live music venues will share nearly $800,000 in ACT Government COVID recovery funding. Check out the full list and what they got https://t.co/w8nxBBNuFT (1 hour ago)

@The_RiotACT @The_RiotACT
Fire destroyed their Wallaroo home of over 50 years. Bernie O'Brien relives the terrifying few minutes he and his family escaped the blaze https://t.co/cHlAdTrlRY (3 hours ago)