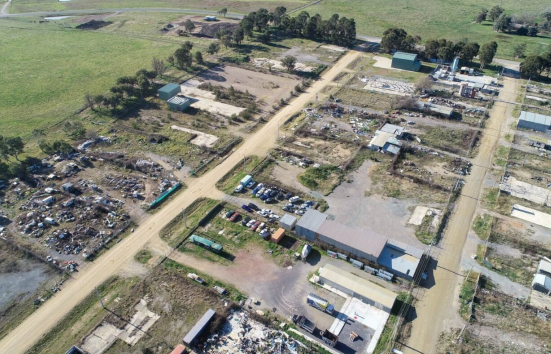 The ACT Government is moving to clear remaining infrastructure at the old West Belconnen tip so the 107-hectare site can be integrated into the Ginninderry development near the NSW border.

The government’s waste manager, ACT NoWaste, has lodged a development application for demolition works and the removal of waste and hazardous materials on the site, which sits in the centre of Ginninderry, being developed jointly by the ACT Government and Corkhill Brothers’ Riverview Developments.

The demolished Mr Fluffy loose-fill asbestos houses were dumped in landfill there. However, while most of the asbestos had been safely disposed of, some remains.

Businesses still on the site are winding down as the land is prepared for handover to Ginninderry for non-residential development and community facilities.

The proposed works involve removing and demolishing infrastructure at the PRRE, the recycling drop-off centre, and elsewhere on the site. 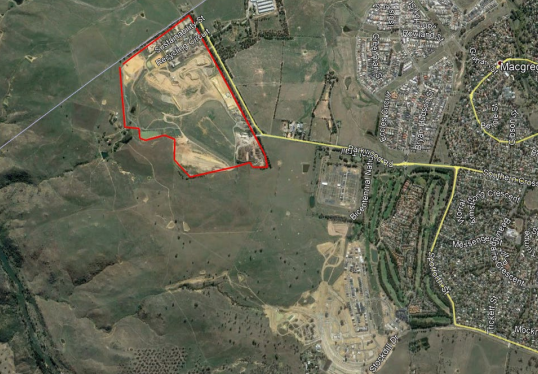 The site next to the NSW border and nearby West Belconnen suburbs.

While the land will need to be remediated and rehabilitated post-demolition, and any related future development application for the site will be referred to the Environment Protection Authority, identified hazardous materials will need to be removed before the bulldozers move in.

ACT NoWaste and the EPA have agreed on approved disposal locations and methods for the various waste streams, as part of the waste management plan.

A sediment and erosion control plan includes a silt fence to be erected along the low point site boundary to protect the verge, with a wall of hay bales to capture the majority of sediments before they can reach the fence.

Neighbouring areas can expect an increase in truck traffic transporting demolition equipment and removing waste materials during the works, which will take place in two stages – 20 weeks each for the PRRE and WBRMC.

Measures will also be taken to mitigate bushfire risks including bushfire training, firefighting equipment and safety gear on-site and in vehicles, and spark arrestors fitted to plant.

Ginninderry is a master-planned development that stretches from the north-western suburbs of Canberra (Holt and Macgregor) across the ACT/NSW border into a part of the Yass Valley.

It is being developed over 30 to 40 years and will eventually be home to 30,000 residents.

“ACT NoWaste and the EPA have agreed on approved disposal locations and methods for the various waste streams, as part of the waste management plan.”

Why weren’t the locations revealed? The only possible sites are the old quarry on Mugga Lane and the MLRMC.

Perhaps you can share the evidence you base such an assertion on?

How about a follow up on the future of north side green waste facilities. CSG have started handing out flyers that they will close at Parkwood end of June, blaming the ACT gov not renewing their licence.
I can’t find any trace of a decent alternative, although lots of conspiracy theories.

Has anyone even looked at the plans?

There are no houses proposed to be built on this area, it’s going to be used as commercial land once it’s fixed up.

WOW. The first thing anybody needs to do before purchasing any property is identify if it was a rubbish dump in years before.

Nobody is likely to make foundations deep enough to ensure that there won’t be cracking in the structures for years to come.

They will level it and build units on it

I hope there will be no digging around the areas where hazardous chemical and radioactive waste from local universities, doctors surgeries and hospitals was buried. The site was somewhere to the left of the tip entrance off Parkwood Road near the bottom of the proposed area in red in the photo.

Alice imagine building your house on a dumping site lmao

I forgot this place still existed

Where will the green waste at CSG move to?

There are always latent problems when residential housing is allowed near/over old waste disposal areas. Yet another problem area has emerged in Melbourne:

There are a lot of unchartered buried garbage sites in the new Ginnenderry subdivision and seeing in the recent Melbourne report that methane has been leaking into some homes could this be the reason why the EPA was not obtained? Also, methane is highly explosive so is this the reason that no gas connections have been allowed in the new development?

Something more than old garbage is starting to smell in north-west Belconnen.

“ACT NoWaste and the EPA have agreed on approved disposal locations and methods for the various waste streams, as part of the waste management plan.”

Where are the “approved disposal locations”? My guess is the MLRMC which is keeping them in the ACT. This way there will be no cost to the Riverview/ACT government joint venture but the risk of a future problem to Canberra residents remains.

So your alternative is to make it someone else’s problem CR?

Where is a ‘rolls eyes’ emoji when one needs it.