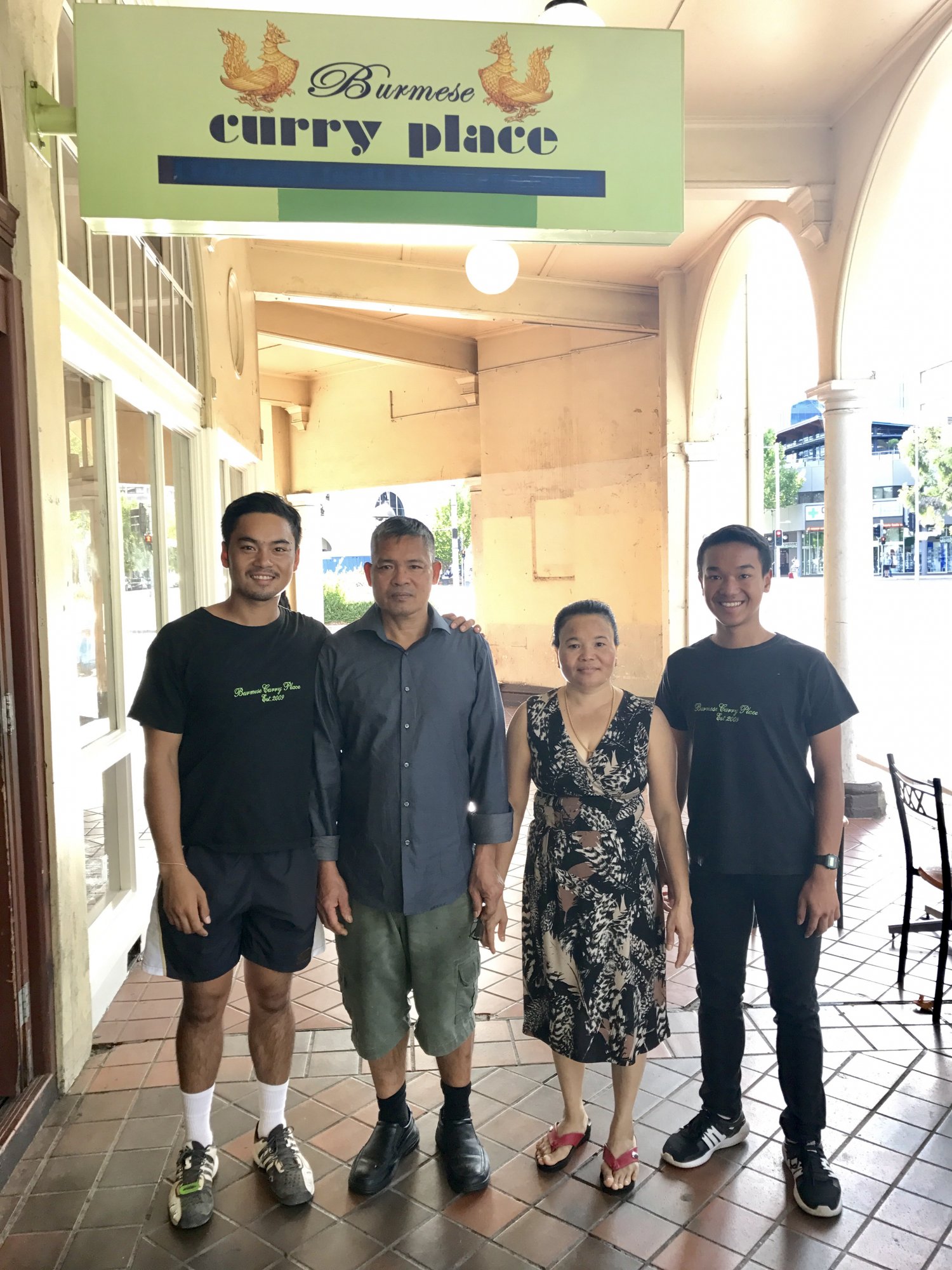 Canberra icon Burmese Curry Place will be closing at the end of month, ending the eight year run of the takeaway powerhouse.

The closure owes to an unresolved dispute with the landlord. The Chan family, who own BCP, will take an indefinite hiatus while scouting a new venue.

“It’s heart breaking to admit and more so to accept that this is real,” said Mehnsaik Chan, the family’s second eldest son.

“We really didn’t want this to happen, and with us not being in control of certain agendas, we’d like to say that this last month is going to be tough but things won’t change, we’re still ready to serve until the day we can’t.”

“For those who know our family, especially my parents, have had one of the hardest years – both physically and mentally – which we still are all recovering our best from.”

The restaurant was opened in 2009 by Mi-Mee and Nai Chan, members of Burma’s oppressed Mon people, who came to Australia fleeing the horrors of the Burmese civil war.

The couple arrived in Canberra with minimal cash and a skeleton English vocabulary. In a stunning rags-to-riches story, they got their start growing Asian vegetables at the Lion Club community garden, where they saved the money to start the business.

Nai, the father of the family, learnt how to speak English from a family friend. While Mi-Mee, whose family run a restaurant on the Thai border, developed the BCP’s smorgasbord curry offering, adjusting Burmese recipes for Australian palates.

They rented the location from a former bookshop and used $100,000 of their own money to install a kitchen, which they built themselves.

The end result, unpretentiously named Burmese Curry Place, was a stable nine piece menu in a convenient location at low prices—all of which endeared it to inner north bohemians, students and civil servants alike.

“I’m really devastated to hear this. One of the best things about working in the city was being 30 seconds away from BCP. I hope they find somewhere else soon and that it’s not too far away.” said Matthew Schofield, contractor to the Department of Infrastructure.

“I’ve been going to BCP since I first arrived in Canberra in 2010 and the 3 & 8 never failed, I really hope they manage to find a new place to set up,” said Rahul Balan, a lawyer in the city.

The restaurant was staffed exclusively by family members. Regulars watched down the years as the children grew up.

What were your favourite combos everyone? 4 & 5 here.

Is there any update on when / if / where it will be opening again?

Hi! thanx Flick, We are opening Burmese curry place again at the same building near Moosehead, this Thursday.

Great write up. Such a shame to see them go. Please pass on my details to the business owner – Chris Antos, Laing+Simmons Commercial Property. chris.antos@lsre.com.au – 0422 837 647. I work in commercial real estate and have some great options for their relocation with excellent landlords! Cheers, Chris

Sorry to see this great little restaurant go. I hope you find another site nearby!

thanx for your comment Wendeborg, mum and dad they are able to find a new location and they are opening this Thursday.

I hope this is not another case of landlord gouging? What a shame! They will be missed. We need RiotACT to keep in touch with them and then tell us their new location.

thank you for your support ChrisinTurner, mum and dad is opening restaurant this Thursday near Moosehead.

Beef and potato curry (no. 7?) – be still my beating heart! Yum! I look forward to BCP opening at a new location asap and hopefully not too far from the bus interchange (I don’t work in the city so only visited the BCP when I had errands to do in town).

beef and potato is number 6 and chicken and prawn is number 7, Yes we have a new location on the same block of building next to Moosehead, mum and dad are opening this thursday. And quite close to bus interchange / tram interchange, thank you for your support msgrumpy.

It will be sorely missed by many people. Like the author and many customers, I hope they find somewhere close to where they are now and a more stable future for the family. The have clearly worked hard and always treat their customers well so they deserve success into the future.

🙁 Elias I think it was you that first introduced me to BCP through your food blogs. A big loss for the CBD, but I am sure they have a bright future if they can find a different site.

thank you for your comment, mum and dad found a location for the restaurant, they are opening this Thursday near Moosehead, quite close to the location.

It will be sorely missed by many people. Like the author and many customers, I hope they find somewhere close to where they are now and a more stable future for the family. The have clearly worked hard and always treat their customers well so they deserve success into the future.

thank you for your thoughtful comment, yes we find a close-by location but took a bit longer than we first thought, mum and dad, are happy to go about with their cooking, after a big break. They are opening this Thursday quite close to the old location next to Moosehead. thank you for your support.

Heavs - 17 minutes ago
I actually like what the Tasmanian Government just did. They partnered up with Hockey and bought a rolling bunch of events to... View
Capital Retro - 1 hour ago
"The sports organisation would, of course, require a substantial amount of money from the ACT Government to attract the event... View
Hans Dimpel - 1 hour ago
big professional corporate sporting organizations just go around harvesting grants and subsidies off taxpayers, leaving less... View
News 2

Vander Leal - 25 minutes ago
David Jackson maybe you don't see how public debt has been used to "keep the economy alive and thriving"... Nothing wrong wit... View
David Jackson - 3 hours ago
Interesting to know how? If I ran my business at a loss every year for the last twenty years and accumulated more debt while... View
News 1

nobody - 30 minutes ago
Colonisation turned this continent into the great country it is today. If colonisation had not taken place, then MLA Paterson... View
Community 7

@the_riotact @The_RiotACT
An inquiry into a proposal to #decriminalise possession of small amounts of illicit #drugs - including MDMA, heroin and ice - has recommended the bill be passed by the Assembly, albeit with a few changes https://t.co/47MpvWYcpS (49 minutes ago)