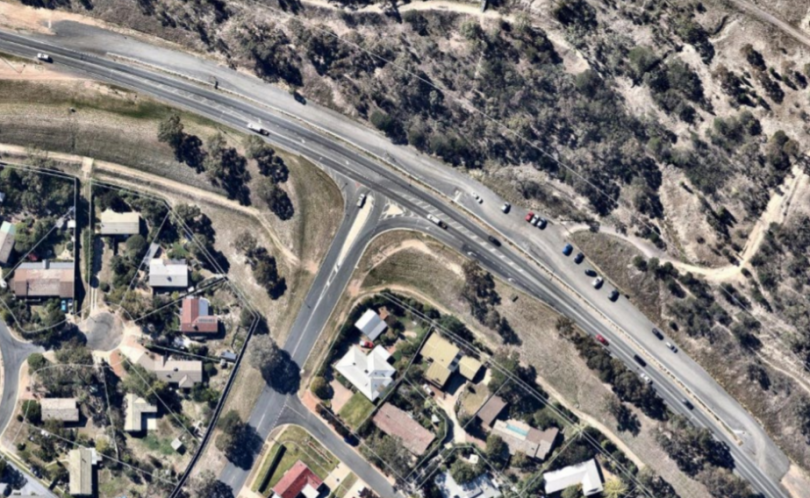 An aerial shot of the Mt Taylor car park and the intersection of Sulwood Drive and Mannheim Street, Kambah. Photo: ACT Government.

The recently upgraded Mt Taylor car park in Kambah is to be extended, including a new gravel section and pedestrian and cycle links, according to an ACT Government tender for a feasibility study and design options.

The project will also include a feasibility study for a safe dedicated right turn into the car park on Sulwood Drive and a new shared path along Sulwood Drive between Drakeford Drive and Athllon Drive.

Major Projects Canberra is also seeking design options for turning and slip lanes on the southern verge, widening the pavement on the southern side of Sulwood Drive at the two-access point to the car park area near Mannheim Street to improve safe turning exits, and potential construction of a median traffic island to provide a two-stage pedestrian crossing of Sulwood Drive near the intersection with Mannheim Street.

It was originally proposed as part of a $5.8 million joint Labor package during last year’s Federal election campaign.

The successful tenderer will be required to investigate and assess the condition of the intersections, undertake a traffic analysis, recommend development options, and develop and finalise designs.

The Mt Taylor Nature Reserve is an increasingly popular walking and cycling destination, attracting 4,000 visitors a month, and the car park has been a safety concern for years, particularly as traffic increased on Sulwood Drive.

The government said at the time it would continue to monitor traffic conditions at the car park and flagged further works to make it even safer.

This year it also installed a solar-powered CCTV camera in the car park in response to reports of car theft and vandalism.

Given they built this “car park” on land we always thought was set aside for duplication of Sulwood Drive, more changes seem a bit strange. What will happen to it when they decide this is needed?

This is still a dangerous area, with most drivers ignoring all the road signs, and turning wherever they like.

Had a walk at Mt Taylor today. Yep definitely needs some attention, cars were going everywhere and it’s an accident waiting to happen.

I reckon there were a minimum of 50 cars parked there.

An area down the bottom would be great for stretching....maybe a large concrete slab where you can do sit-ups, too.

A very popular area in much need of safer infrastructure.

A AAMI crash report had Sulwood as one of the most dangerous roads in Canberra. It is very busy single lane main road and it winds around a fair bit with some very poor intersections.

I’ve always wondered why it doesn’t have a roundabout at Mannheim. That would have been the easiest and cheapest solution for the road and car park.

Jess Lang this is soooo good! But I was hoping this post was about opening nail salons 😂🤦‍♀️

The car park was poorly thought out by the government and in my opinion very unsafe. I don’t feel any safer driving in or driving out of there (let alone sitting behind a car that decides to dart over last minute).

Ask the people what needs to be done.

Magarac Singh what do you want, traffic lights? It's a long car park opening onto a single road used just for access to Mt Taylor. Exit left and find a roundabout.

Robyn Holder no, not traffic lights but the design is unsafe as it is.

Robyn Holder maybe just a baracade / fence that means you can only enter or exit at certain points, not the whole way along

Magarac Singh the people who use this car park still drive just as dangerously as they did before it was built. I still hate driving by. We don’t need to use it, however some consideration from those who do would be appreciated. Please OBEY the traffic signs people!!

Robyn Holder it was badly designed in our opinion and is no safer for users of Sulwood Drive than it was before. The users of this car park scared us then and they scare us now.

People obeying the signs would be good as you suggest: exit left and use the roundabout down the road.

It would be much safer if they put traffic lights at the intersection with Mannheim St.

It extremely dangerous car just cutting across in front of others to get there. The only safe way is for the cars to enter from Drakeford Drive end.

Rick Robins - 36 minutes ago
Laurie Berry it's all ok, Canberra has a tram instead of basic services! View
Earthdog - 4 hours ago
Michael and Mark, depends if it was a Truffula tree because not everyone needs a thneed. Although it is very handy at Canberr... View
News 188

Terri Lee Gill - 57 minutes ago
Get over it you have had ample warnings and if you can’t control the pedal under your foot to abide by the law not only in... View
Richard Vlazlovski - 1 hour ago
Heading toward the social credit system just like in china . View
Chris Jones - 2 hours ago
Knowing our government they’d assess your home as part of your income to fine us more View
Food & Wine 2