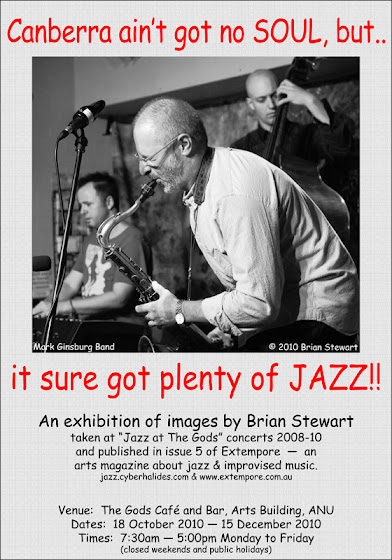 The old cliché that Canberra hasn’t got any soul has a new response – it has plenty of jazz instead. A new exhibition of images by Brian Stewart documents the thriving local jazz scene at one of its more popular venues – The Gods Café and Bar at the ANU.

The exhibition is timed to coincide with national coverage of the Canberra jazz scene in Extempore – a journal of arts and writing that is about, inspired by and responding to jazz and improvised music. Issue 5, just released, includes “Jazz at The Gods” in word and image.

It features an essay by renowned poet and jazz enthusiast (and well-known Canberran) Geoff Page about the monthly series of “Jazz at The Gods” concerts he organises, titled “How to Shut Up and Listen — or, Let a Thousand Venues Bloom”.

Geoff’s essay is accompanied by a portfolio of Brian Stewart’s black and white images – the same as in the exhibition – showing local and national musicians in action at The Gods.

The images demonstrate what a good listening venue Jazz at The Gods is. It attracts big name jazz artists, who respond with quality and intense performances. Local musicians are also featured. The musicians portrayed in the images include Australia’s pre-eminent jazz keyboard player – Mike Nock – together with leading exponents of other instruments, including trombonist James Greening; trumpeter Warwick Alder; and saxophonist Mark Ginsburg. Several former Canberra musicians who have made it big on the national stage are also featured: vocalist Gian Slater – who was a finalist at the recent 2010 Freedman Jazz Fellowship finals at the Sydney Opera House Studio – as well as saxophonist Andrew Robson.

The local jazz scene is booming at the moment. Great kids coming out of the school of music. They need places to play and people to listen to them. We should support the scene to ensure that it stays that way, and that means supporting both the musicians and the venues. And of course the photographers.

4 Responses to Canberra Ain’t Got No Soul …. but … It Sure Got Plenty of Jazz !!
Filter
Showing only Website comments

Ahhh! You mean the font! Well, I happen to like it. YMMV

my boyfriend is at the school of music, i totally agree that canberra’s jazz music scene is thriving – there are some amazing musicians coming out of the jazz department.

1967 - 39 minutes ago
Yup. Hospital cleaners should be paid more. But, One of the mote concerning tbings in this article is that the drivers are on... View
Acton - 1 hour ago
Why the silence and inaction from the Greens/Labor ACT Govt? Why is this newly elected government doing nothing to resolve th... View
Community 22

Tennis ACT - 4 hours ago
What a great achievement Snedden Hall & Gallop! View
Martyn O'Connell - 17 hours ago
the 333 bus painted up to look like the XPT View
Katy Did - 18 hours ago
I loved that tram when I worked in Civic View
Opinion 16

Rodney Thompson - 6 hours ago
Someone who actually deserves a payrise. View
Opinion 55

Ashley Wright - 6 hours ago
Chris Olsen actually Clinton was right. William Hovell drive had the limit lowered between Coulter Dr and Bindubi street beca... View
Tolga Altinbas - 9 hours ago
Because one is a roadwork sign. And the other one is always there on the pole View
Wang Chow - 10 hours ago
My guess is that they changed the speed limit in Chisholm/Richardson because its cheaper than putting in more speedbumps that... View
News 21

Bill Gemmell - 14 hours ago
Additional well-located transport infrastructure is a plus. However, maybe they should be thinking about covering these with... View
Greg Batten - 16 hours ago
Great idea for both ACT light rail and bus networks. View
Ashley Wright - 18 hours ago
Justin Watson it is, the article has that a bit wrong as the “new” stop is at Sandford Street intersection about 1km away... View
Opinion 22

@The_RiotACT @The_RiotACT
Analysis of Project Independence homes has found that for every dollar invested by the government, up to four dollars' benefit is returned https://t.co/E2vBjxKSaJ (2 hours ago)