CANberra BEER now available in CANS thanks to Bentspoke 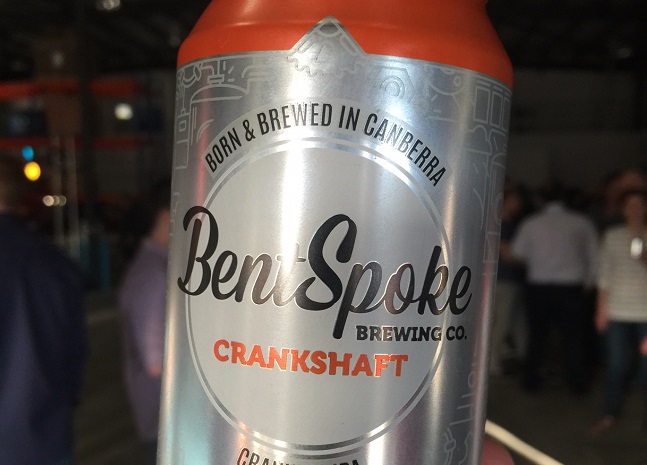 On the eve of a massive 10 day celebration of beer and brewing across Canberra, local brewers Bentspoke Brewing Co. officially launched their new range of beer cans, made locally in their new Mitchell Cannery.

The Cannery is massive and easily makes Bentspoke the biggest brewery in Canberra, as these pictures from local brewer Dan Rayner (aka @BrewBloke on twitter) show!

Owners Richard Watkins and Tracy Margrain proudly christened a 10,000 litre fermenter with beer. The Cannery will be one of the largest independently owned breweries in Australia.

There were a few famous faces in the crowd who were keen to try Bentspoke’s unique cans, whose opening is MUCH larger than on a normal beer or soft drink can.

And it’s not just a gimmick! As Jeremy Michael from Bentspoke Brewing Co. explains – the unique opening of Bentspoke beer cans helps beer connoisseurs enjoy the enticing aroma of hops and malt while they drink this tasty Canberra brew.’

If you’d like to try out some of the new Bentspoke cans yourself they will be on sale at various liquor outlets around Canberra from today and as part of the Canberra Beer Week celebrations which are on until 13 November. And the Cannery itself will be open to the public for the first time at a Cannery Carnival this weekend!

For seven hours you can join the Bentspoke crew for live music, great food and, of course, glorious beer, as they throw open the doors to BentSpoke Mitchell’s Cannery to the public for the first time. The carnival will feature food by Cooking with Beer and Strictly Ballroom star Paul Mercurio and BentSpoke Head Chef Matt Morrissey. This is a free event.

Oh, and I just thought of a new meaning for the famous #CBR acronym! Canned Beer Rocks!

I must say the can design looks a lot better than that long-forgotten Canberra Bitter in the 1980s with its cartoon drawing of Canberra featuring the Tower and NPH. Another good point is that this beer is locally owned and produced whereas Canberra Bitter was produced by CUB in Melbourne.

Plonk at the Fyshwick Markets had the Barley Griffin pale ale for $34.90 for 10. The Crankshaft IPA was a bit more expensive, but had sold out.

It’s great that a cannery has been established in Canberra by the brewer.

We need manufacturing industries in this city.

Are they going to do custom canning for other brewer’s?

I was there last night and hoping to take some product home with me. Alas, my key question is still unanswered – how much!!!???

Sean Kinmonth - 11 minutes ago
There is a risk with every power source. The link is particularly biased and tells half truths and should be discounted as be... View
dulynoted - 4 hours ago
the electricity market in australia seems rigged, we pay way more for electricity than other countries with similar generatio... View
Capital Retro - 4 hours ago
Then there is the "thermal runaway" risk if these things catch fire: https://stopthesethings.com/2020/03/01/giant-batteries-b... View
Sport 4

Gassed - 3 hours ago
Shame I thought they were going to sell actual chilli's not just sauces... View
Brisal - 8 hours ago
I can't wait to check out the new store! View
Food & Wine 50

@The_RiotACT @The_RiotACT
Can you have a rewarding career and live regionally? @allinsure’s newest senior account executive Sarah Townsend says yes, you can https://t.co/6wZv0NBaEG (39 minutes ago)