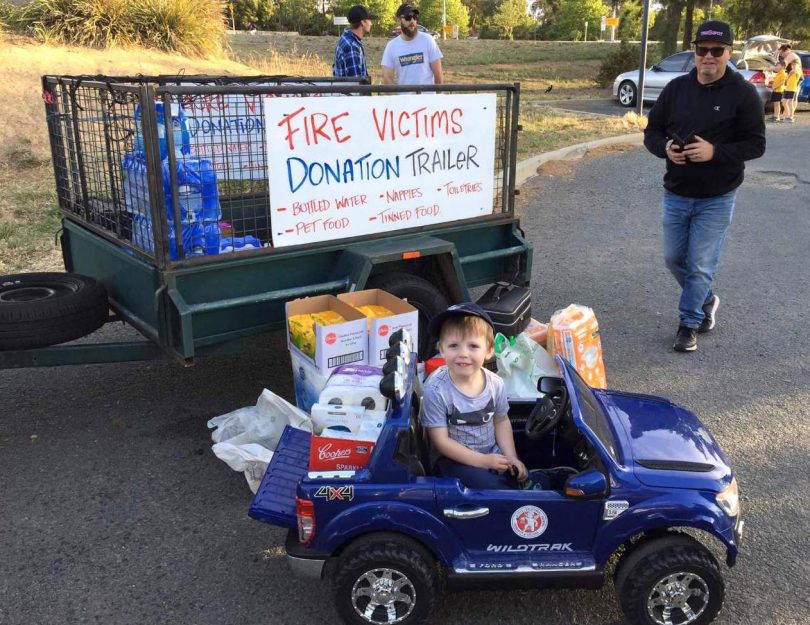 Young Charlie arrived in his mini vehicle with items for donation with Andrew Dale (right) from The G Spot at Gungahlin. Photos: Supplied.

The generosity of the Canberra community to help people in bushfire-affected areas is enough to fill a 19-metre truck and trailer, and even that might not be big enough. We might need a bigger truck.

Such has been the support from the Canberra area, it is hard to accurately say just how much has been donated so far but it’s growing fast.

Andrew Dale from The G Spot in Gungahlin, one of the drop-off locations, is no stranger to rallying community support. He told Region Media the response from people in the area has made his hair stand on end.

Within a few hours of posting the call on social media on Wednesday, the messages, phone calls and donations started coming and haven’t stopped.

Posted by The G Spot Canberra on Wednesday, 13 November 2019

On Thursday night (14 November), there was $400 worth of muesli bars and another 72 boxes of water.

“It’s just so typical of what the G-Spotters do in a time of need. It blows me away. Doing what we do here just makes my hair stand up and it’s such a good vibe to see people rallying around. The difference they are going to make is just bloody fantastic.

“We’ve all got problems and some people’s problems are worse than others, but some of these people are renting a house and they don’t have contents insurance. They’ve lost their bed and they’ve got nowhere to go – they’ve lost everything and they’re the people I really feel for,” Andrew said.

The effort is also connecting people with the common bond of supporting others in their time of need. They are even outdoing each other with their donations of bottled water, nappies, toiletries, pet food and tinned food.

One of those connections came when Andrew received a message from Mick O’Regan from Mick’s Transport Service, offering his truck to transport everything from Canberra on Monday. The two had never met and now share of common bond that will ensure the items get to where they are needed most. 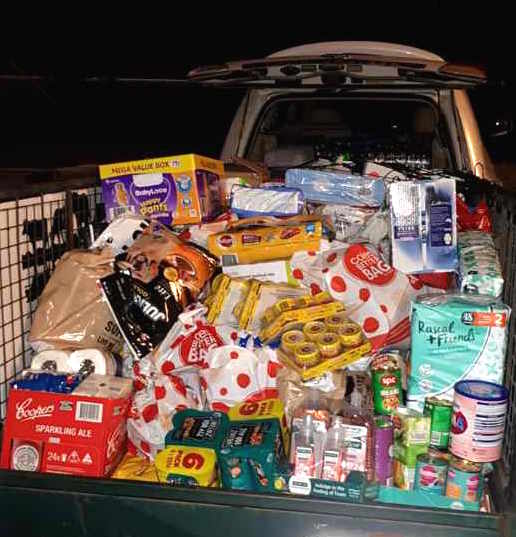 Another trailer load of donations arrives for distribution.

Mick said the logistics of picking up everything is mind-boggling.

“I had to call up a place in Queanbeyan that makes pallets and they donated crates so I can transport all the loose items,” Mick said.

That’d be ACT Pallets and Wholesale Hardwood. Another local company answering the call.

“It’s a case of me being in a position where I can help, so why the bloody hell not pitch in and do what we can?” Mick said.

The donated items will go to Nambucca Heads RSL, a distribution point for areas most affected on the NSW mid-north coast.

“These people need the stuff ASAP, not in five or six days’ time,” he said. “There are a lot of organisations asking for just monetary donations, and that’s fine, but there are a hell of a lot of people that require food and other items.

“This distribution will go to people where they need it most. They don’t have a way of getting to shops to buy things.”

Another person organising collections is Stephanie Rushton, who is also no stranger to helping people when they need it. She has been organising support packages to farmers for the past two years.

“The struggle is real, it’s not just ‘somewhere out there’, it’s right here, it’s right now and they need all the help and support we can muster,” Stephanie said.

Update: A second truck is now making the journey north, with Tony Day from Tony Innaimo Transport getting on board once he heard the story. Mick and Tony’s trucks will be leaving Canberra on Monday (18 November), so get your donations to your nearest donation station by then.

If you want to help out over the weekend by donating items, contact Andrew via The G Spot or Mick via Mick’s Transport Service and they can tell you what is needed. Or just follow their Facebook pages for updates.

Please donate money rather than goods. Goods donations are all very well but it can put a lot of stress onto affected communities - they need to sort it, store it and distribute it fairly and this can take a lot of time and energy that could better be directed elsewhere. Much of what is donated is not what's actually needed. Also, local businesses are affected because they lose custom. Following the Black Saturday fires, millions of dollars was spent on coping with goods donations and much of it ended up in landfill.....☹️

People need to read story they have organised to drop of at Nambucca RSL so the items go to the people who need it on the ground asap. Great job by Mick and all involved!

Their hearts are working! Great!

The donated money is also often spent in local businesses so has an extra impact.

Andrea Mya Riboust - 4 hours ago
Matt the former I assure you 😄 View
The Martini Whisperer - 6 hours ago
Lucky they’re weren’t in Texas. View
HiddenDragon - 8 hours ago
So the Big Merino will be the command HQ for Gilead Down Under - and they said it couldn't happen here......... View
Food & Wine 12

Sam McCracken - 7 hours ago
Lea Powell agree to disagree then. We clearly see this from 2 different points of view, but if you re-read your comments you... View
HiddenDragon - 8 hours ago
Based on some of the apparently well-informed comments here about ACT public housing policies, it is truly fascinating to see... View
Lea Powell - 11 hours ago
Alicia Boardman exactly! View
Opinion 12

The food truck hitting the spot for nearly 20 years