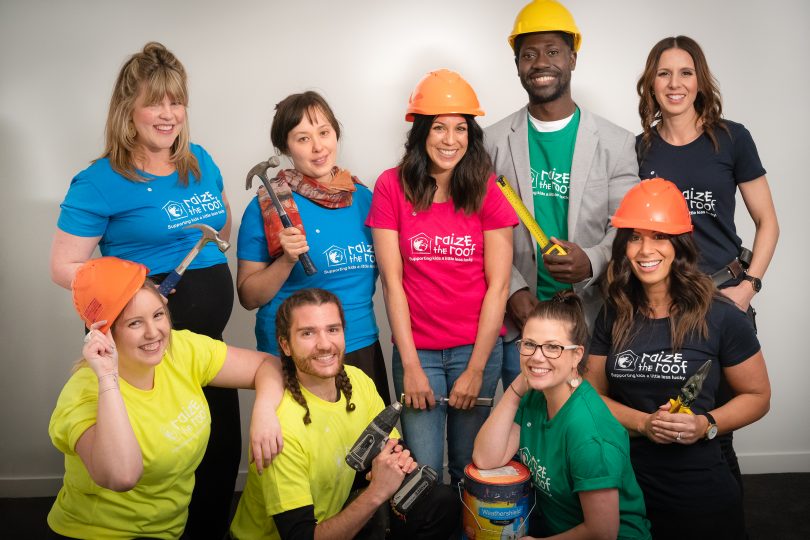 Nine Canberrans will fight out a reality home styling challenge as part of local charity raize the roof’s bid to raise a million dollars for disdavantaged children.

Decorate for a Difference will pit four teams of two and a solo stylist against each other to give raize the roof’s Charity House in Bonner a complete style makeover, in preparation for auction on Saturday 20 October 2018.

The home at 17 Clancy McKenna Crescent, Bonner has been built almost entirely from donated materials and labour.

While some contestants come armed with styling experience in Canberra and nationally, others are amateurs and were chosen for their passion and creativity. Their day jobs range from yoga teachers to graphic designers and public servants.

With the help of IKEA Canberra, teams will select their furniture and styling items and completely decorate their allotted zones in the home in just one day.

Guided by Luton Properties auctioneer Jason Roses, teams will be given a brief on current trends in the Canberra market to get the best possible price for the three-bedroom charity
house.

Contestants will have exclusive after-hours access to IKEA Canberra, along with an army of IKEA co-workers to help them assemble their chosen pieces on the day.

They must draw on all their creative talents, determination and strategy to produce breathtaking reveals that impress not only potential home buyers, but three high-profile judges too.

Raize the roof co-founder Danielle Dal Cortivo congratulated each team on making it through to the competitive challenge that saw more than 40 Canberran teams and soloists apply.

“The quality of applications we received was phenomenal, and we’re so excited that the Canberra community is jumping on board and getting involved,” Ms Dal Cartivo said.

“We’re hoping Decorate for a Difference will help us reach our $1 million goal to raise money for the Starlight Children’s Foundation and SOS Children’s Villages in Botswana.”

The competition will be broadcast on social media as a reality show, and the Canberra community will be instrumental in the final styling choices and voting for their favourite zone.

The winning team – based on a combination of points from the judges and voting from the Canberra public – will be crowned Canberra’s Top Stylist/s and receive $1500 worth of products from IKEA.

Every dollar donated is a vote towards a favourite zone. One voter from the public will win an exclusive in-home consultation with IKEA Canberra and a $500 IKEA gift card.

If Canberrans love what they see in the house, they can bid for the furniture and styled items in each room, generously donated by IKEA Canberra with all proceeds going to the Charity House project.

Half the proceeds from the auction of the Charity House will be donated to the Starlight Children’s Foundation to support children with serious illness and their families living in the Canberra region.

The other half will go towards supporting SOS Children’s Villages to develop self-sustainable projects, which support orphaned children in Botswana.

Michael Hardy - 3 hours ago
it needs to be moved View
Më Batterbury - 7 hours ago
I think 50 is ok but 40 is just ridiculous View
Jazzy Dhooria - 8 hours ago
You voted them in... Just sayin View
Property 1

JS9 - 4 hours ago
Any actual evidence to support a claim of a 'mass exodus' to Queanbeyan to shop? There must have been some either exceptional... View
chewy14 - 5 hours ago
JC, I asked how this was in ways different to the National Plan as you claimed. I agree with you that the quick changes that... View
HiddenDragon - 6 hours ago
In the cosily predictable, symbiotic ecosystem which is the ACT politico-media complex, the unambiguously critical lead story... View
News 5

Capital Retro - 4 hours ago
A decision made by people who have never used Centrelink's services and who will never have to. View
JS9 - 4 hours ago
To be fair, the ones primarily promoting densification int his case (ACT Gov) have zero to do with the decision to move Centr... View
Lifestyle 33

jorie1 - 7 hours ago
Are you sure that it is current renters buying properties? The research I have read shows that many people who rent will do s... View
jorie1 - 7 hours ago
Hi Assiduous, I do agree that $500 per week is a lot of money - but the majority of that money goes to the ACT government in... View
assiduous - 8 hours ago
$500 per week is not low - it is enough to build a modest detached family home every 10 years. It is a reflection of Australi... View
show more show less
*Results are based on activity within last 7 days