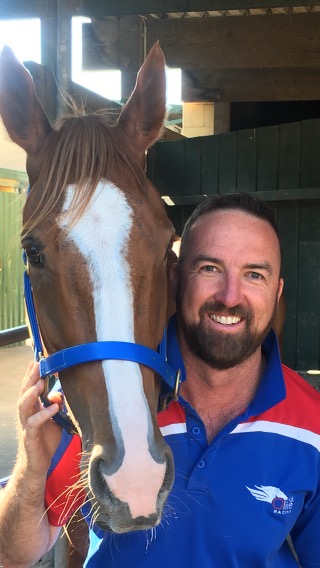 Horse racing has been part of Nick Olive’s life since he was eight years old. Photo: Supplied.

Horses have been Nick Olive’s passion for almost as long as he can remember.

The 49-year-old remembers going to the races with his dad, Laurie, and younger brother, Tim, when he was just eight. It’s been a major part of his life ever since.

“My family is very academic, but I wanted to be involved in horse racing,” says Nick. “I love horses and racing and I love the competitive aspect to it.”

By the time he finished year 12 at Stirling College, Nick was well on his way towards his goal of working in the racing industry.

“While I was at school, I worked with trainer Simon Katz who used to train on a property at Kambah,” he says. “My dad would drop me at the stables before school and I would help with the horses, then Simon dropped me off at school.”

“I also completed a two-year degree in horse management at Orange Ag [Orange Agricultural Institute],” says Nick. “It was part of the deal with my family that I had to do a degree.”

After his eight years with Barbara Joseph, Nick says he was ready to go out on his own.

It was a daunting prospect securing his trainer’s licence at 32 years of age, with just six horses in his stable.

Then six months into his career as a trainer he took what would become one his biggest gambles.

“I bought a yearling called Zenarta for $6000 at the Scone sales,” says Nick.

“Initially I bought it for a few accountants in Canberra, but they didn’t want anything to do with her. I didn’t have much money so my family and mates took shares.”

Under Nick’s training, Zenarta went on to win $250,000 in prize money before being sold for quarter of a million dollars.

“It set me up for the future,” says Nick. Canberra’s Nick Olive has had considerable success as a horse trainer. Photo: Supplied.

Single Gaze went on to become one of the most popular thoroughbreds in Australian racing, winning $2.3 million in prize money.

Small in stature, Single Gaze captured the public’s imagination with her enormous will to win. And win she did, with victory in the 2016 Group 1 Vinery Stud Stakes.

She then placed second in the 2017 Caulfield Cup, a career highlight for Nick.

“I still get goose bumps when I think about that race,” he says. “She was only little, but she had the biggest will. She was a fighter. She was so special.”

Sensing her racing days were over, Nick and the syndicate sold her for close to $2 million to a breeder in Japan only to see the breeder continue to race the horse a couple more times, albeit unsuccessfully.

Single Gaze is now breeding on Japan’s Northern Farm Stud, having given birth to her first foal.

For Nick, it is part of the emotional journey that is the life of a trainer, where the thoroughbreds become part of the family.

It’s not an easy life with the early morning starts, and it’s a seven-day-a-week job with plenty of uncertainty.

“Racing in Canberra is under pressure because of the insurance issue,” says Nick.

“The ACT Government is not as supportive of horse racing as they are in NSW. That surrounds us. We are an island surrounded by NSW, where there is more support for the industry, and we have to compete against them.”

Not that Nick would want to be doing anything else in life.

I love horses! As a former Junior Legatee (Dad died near Anzac Day in 1960) I was invited twice to Narrabri to attend Pony Camps. I had the same mare each year. In yr 1 she was quite pregnant in year 2 she had her foal with her. 2nd year she turned and head-out she whinnied at me as I walked to the stalls, > 50 yards away. I was talking with the pony-camp folks.

People often tell me I / my siblings, had a hard life.

I think us four boys had a rich one!

In my case – Learning French-Foil fencing and a touch of Epee at Legacy House Newcastle and competing at State level.
Working in Newcastle’s steel-works in Summer holidays. Steel puddling one year, and managing the wire-bail yard for Rylands, two years running!!!!

Before that, learning how to ‘sleep’ a chicken on the Hill’s Hoist, kill it, pluck it and gut it, without bursting the gall-bladder, mind.

And, becoming a chorister at Christ-Church Cathedral, up on ‘The Hill’ in Newcastle city, in my 9th year and for 8 more years!! We even got paid!!!

Becoming a part-time infantryman at age 18 and reaching acting WO2 at >25!!!

Topping a bunch of ARA (RAReg’t) infantry Corporals on the Marksmanship & Coaching Course at what’s now “The School of Infantry”. I had been yelled at and hassled on my CMF run recruits course. But the Regs had dropped that by 1976.

The crosses being the worst.