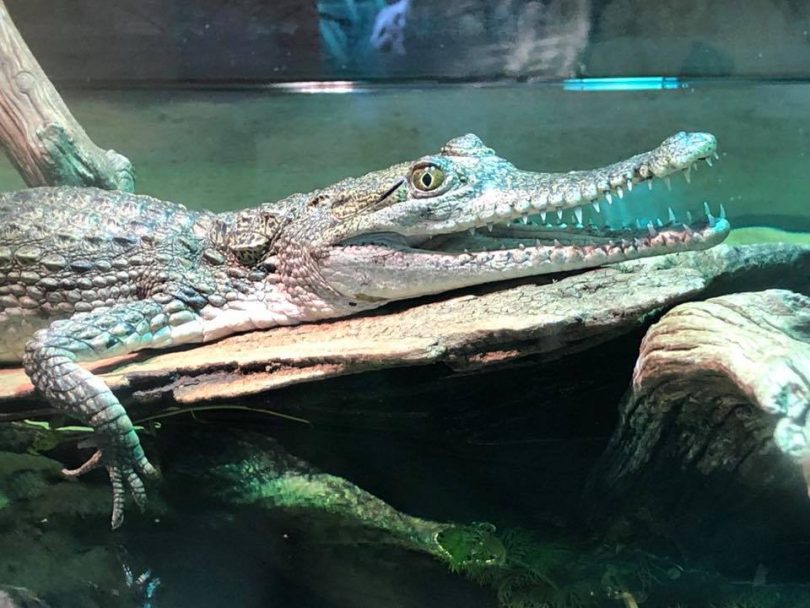 Jaws Junior has been stolen from the Canberra Reptile Zoo. Photo: Supplied.

A thief broke into Canberra Reptile Zoo in the early hours of Friday morning (19 July) and stole two pythons and a freshwater crocodile, leaving the zoo’s staff and owner devastated.

Around 5am, a man was caught on CCTV footage stealing a Stimson’s python called Tim Tam, a hatchling jungle python called Zebra, a freshwater crocodile named Jaws Junior and an expensive register computer.

The managing director and founder of the zoo, Peter Child, said the thief deliberately targeted the pythons but the crocodile was an opportunistic theft.

“The crocodile had been removed from display and was being kept in a tub in the backroom,” Mr Child said. “The pythons were his intended target because after he broke in he went straight for them.

“He smashed their enclosure and picked them up in his hands and then came back and loaded up with all the products needed to keep the pythons. He broke the enclosures which was superfluous because all he needed to do was to lift the doors out.”

Do you think you might know this person?Approximately 6 AM this morning this heartless thief broken to the Reptile Zoo and stole several items including three of our much loved animals. The animals included jaws junior, our freshwater crocodile. Tim tam the stimpson Python And Zebra our hatchling jungle python. The thief targeted the animals specifically and also took several items needed to keep them as well as our register computer . As a non profit organization this has hit us hard but emotionally myself and the staff are shattered !!! Know anything please contact us privately .

While stealing the register computer will hurt the business’ back pocket the most, stealing three members of the zoo family has devastated the zoo’s small team.

“Each one of these animals has a name and each one was a pet to us. The crocodile has been here for a couple of years,” he said. “The animals themselves would only cost $150 each so he hasn’t stolen them because they are valuable but because he wants to keep them himself.

“We are worried about the crocodile the most because pythons can easily be kept but a freshwater crocodile is hard to look after.

“We also had to open late this morning because forensics had to come through. It hurts us quite a bit because it was a busy morning.”

ACT Policing are investigating and would like to speak to anyone who saw anything suspicious near the zoo, or who may have dashcam footage of the zoo or surrounding area, between 7 pm Thursday (18 July) and 8:30 am Friday (19 July).

There was a dead freshwater croc found on the Murray river. Any connection?

Why aren’t they posting the CCTV footage they have showing the man in the act of stealing the animals?

I really hope they catch them, and that everyone is safely returned to where they belong!

I love the place, sad news for everyone. Hope you will get them back,

So sorry to hear that news!! Hope you can get them back.

I hope it bites them!

So terrible. Hope they catch these disgusting thieves

Police computer forensics need to go to google crocodile care sites and obtain ISPs of any local logs to their page.

I will pray for their safe return 🙏🏻

Meth gator on the loose 🐊

Hopefully the police have got enough from this cctv?

How could they do this

Don’t they have back to base security 🤷🏼‍♂️

this is so terrible omg how did this even happen 😰

Michael, Taylor…. at least we know it wasn’t Bateman 😝

Kelly Sledge what the he’ll!

Alex Kerec I saw this earlier, so sad 😞

Emily Peel this wasn’t you was it?

Jo Anna nope. I am aiming for golden retriever. Besides I want them to have all their gorgeous animals insitu for my in laws visit. Jacobs held that freshy…its gorgeous

Why have they got a croc? Aside from unneccesary, it’s cruel.
l do hope they get them back.

Was just there yesterday for a visit with my girls, totally devastated for the team…hope the animals are safe 😥

Michelle McCulloch what is wrong with people!

That’s terrible,Hope they get caught.

Are you telling me there is a python on the loose?! Jason Manuel R Ellie Lund

Ellie Angel-Mobbs TOH? I can Make this funny 😂 I

Steven Ryan what a scumbag