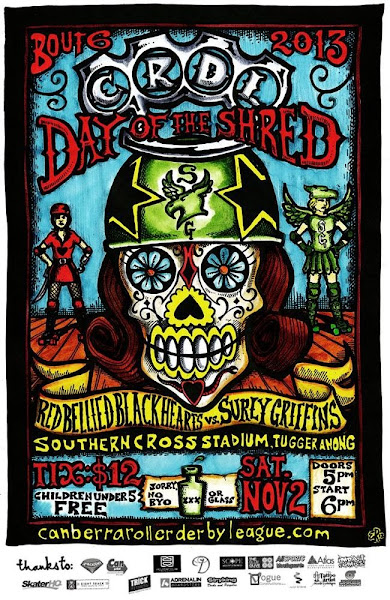 Canberra Roller Derby League are starting November off right by having their second-last event of the 2013 season, an epic bout between the Surly Griffins and the Red Bellied Black Hearts.

The Surly Griffins have been laying out hits and biff on the flat track since the league’s inception in 2009, as one of the two original teams.They’ll be facing off against the Red Bellied Black Hearts, the piratey currs who emerged in 2010 and take no prisoners.

After placing second to the Belles in last year’s championship, the Black Hearts want to assert themselves and take home a convincing win to prepare for the 30 November double-header Grand Final. Having lost to the Belters last season for fourth place, the Griffs are also looking to hand off the infamous CRDL Wooden Spoon…

You can guarantee both teams will be skating hard, smart, and fast for this win. But can you pick who will take it?! The snarling Surlies and the cut-throat Black Hearts are going to find out on Saturday, 2 November …and you should too!

For more information about the Canberra Roller Derby League visithttp://www.canberrarollerderbyleague.com