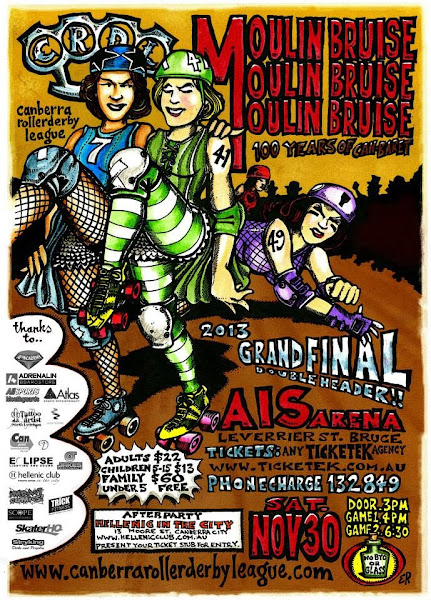 Like the Moulin Rouge itself, Canberra is a city of intrigue, where glittering facades belie a seething underbelly of politics, creativity and raw sensual power. Born in the early decades of a new century, roller derby captured the spirit of an age: cheeky, rebellious and exciting.

As the women and men of Canberra Roller Derby League tip their helmets to a centenary of action, they celebrate by bringing their strongest, hardest, fastest game to the Australian Institute of Sport. Enter a dark and mysterious world, filled with exotic strangers and witness feats of daring and athleticism.

Energized by a hard-fought home season, the skaters of CRDL will don their ever flattering uniforms and safety gear and give you a spectacle like no other. Welcome to The Moulin Bruise!

Peter Quinn - 6 minutes ago
So when can we celebrate colonisation????. Whatever day is nominated it will always be contested View
Alan Hopkins - 12 minutes ago
its not that hard to change the day. just do it... View
Alan Hopkins - 21 minutes ago
Rowan Hartcher you don't speak for anyone but yourself. I'm a white Australian and i will forgive the change of date View
Community 4

Phil Andrews - 59 minutes ago
I have a bridge for sale if they’re interested!! View
Mark Bundy - 2 hours ago
Holbrook !! Omg they’ll walk up and think theyve died again View
James Cosgrove - 2 hours ago
Whoops, power outage, who will pay compensation for all the defrosted bodies? View
News 22

Bradley Heanes - 2 hours ago
Didn't the defence department already appologise for this? (Even though they were assisting the RFS at the time) Didn't they... View
franky22 - 5 hours ago
Why can't the ADF simply state that they made a mistake. View
News 21

Magpie Allan - 7 hours ago
Undoubtedly the two icons are among two of the greatest men you’ll could ever meet.... View
Breaking 5

Tramcar Trev - 8 hours ago
Simple do what other regions do, use local volunteers to staff the visitor centre. View
Sue Sedgwick - 8 hours ago
And what about those passing through town and would like a chat with a local or some quick advice on our treasures. I wouldn'... View
show more show less
*Results are based on activity within last 7 days

@The_RiotACT @The_RiotACT
New figures show public housing has declined in the ACT, but there may be good news coming in the Budget https://t.co/P1qLgyPSFz (2 hours ago)

@The_RiotACT @The_RiotACT
One year after the Orroral Valley fire started, Michael Weaver investigates how the park is recovering, and the threats it faces in the future https://t.co/wywSfIKRoQ (4 hours ago)