Canberra salon owners a cut above the rest 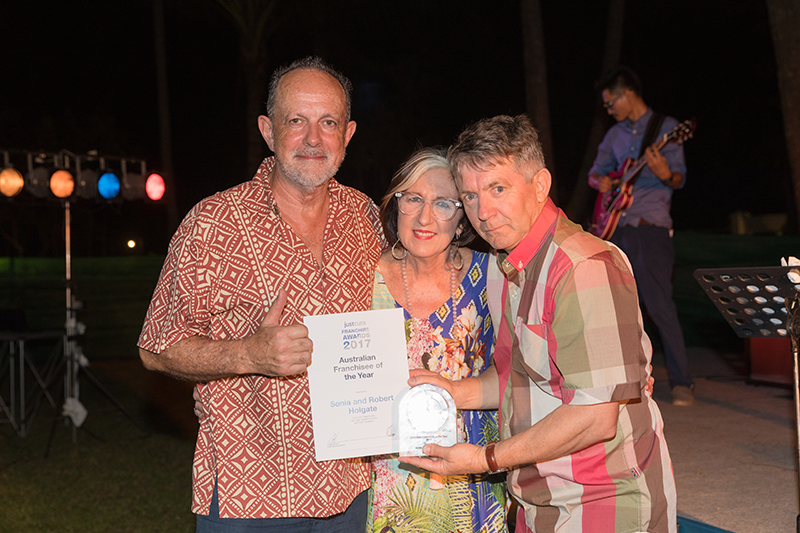 ACT couple Sonia and Robert Holgate have taken out the top gong at the Just Cuts Franchise Awards held during the company’s Annual International Conference in Phuket, Thailand.

Winners of the 2017 Franchisee of the Year award, Sonia and Robert own three Just Cuts salons – in Tuggeranong, the Canberra Centre and Gungahlin.

Sonia started with Just Cuts as a stylist just more than 20 years ago when the Woden salon first opened. In 2004, Robert and Sonia went into business themselves when they purchased the Tuggeranong and Queanbeyan franchises. They have since sold Queanbeyan.

Eighteen months later they established the Gungahlin salon and in 2012 opened the Canberra Centre outlet, which services a more corporate clientele.

But Sonia said they were not looking to expand further, saying “sometimes bigger is not necessarily better”.

Staying with the three salons allowed them to exercise better overall control and plan ahead, with each salon able to operate independently.

Sonia said the key to their success in a very competitive industry was five-star service. “It’s all about the experience, all about looking after your clients like they were a king or queen,” she said.

Each of the Holgates’ salons are set up on the new Just Cuts exclusive cloud-based point of sale and marketing system, have yielded fantastic financial results and are often among the top 10 retailing salons across the 200-strong salon network in Australia and New Zealand.

Sonia said the cloud-based system, which was linked with head office, provided a clear picture of how the business was tracking compared with other franchises and identified any problems that needed attention.

Sonia and Robert said they loved working as both leaders and team members in a franchise community.

“We are both very people oriented and have a lot to give to all our team members. Working as a team is paramount to our salons and we are very enthusiastic as well as energetically proactive within the hairdressing industry,” Sonia said.

“It’s all about the people and the relationships you build. If you don’t look after them they’re not going to look after the business.”

She said communication, training and customer service were crucial to their businesses. “We believe that our team members need to be led and it is up to us to be role models,” she said.

Sonia also invests in her own personal development. “I always try to improve myself because I need to grow if the business is to grow,” she said. “Anything that’s going to uplift me because if I’m in a good head space and working well with myself personally I’m only going to empower and educate my team as well.”

Robert said team development was integral to the business.

“We also have a health and wellbeing program as part of our employment. Team members are given opportunities for further training (internally and externally) as well as personal development,” he said.

“Owning our own business has provided us greater flexibility in life, it has rewarded us with experiences of learning, making new friends and has made our family enjoy what is of true value in life and that is relationships and the power of association. Our three children have all worked in the business and have learnt the value of working smarter.”

Sonia said the Just Cuts brand had been innovative and creative. “Sometimes franchising gets a bit of bad rap but this is a good model, it works well and it’s got a great CEO and a great team around it,” she said.

Just Cuts CEO and founder, Denis McFadden, said the Holgates had consistently stood out among the network of owners over the past 10 years.

“Their commitment to and passion for the Just Cuts way of being is contagious and they really are an embodiment of everything we stand for – quality, excellence and positivity,” he said.

“Sonia and Robert never miss an owners meeting or conference and are always looking for new ideas on how to grow their business. They are collaborative and are happy to work with new and existing owners to reach outstanding outcomes as a community.”