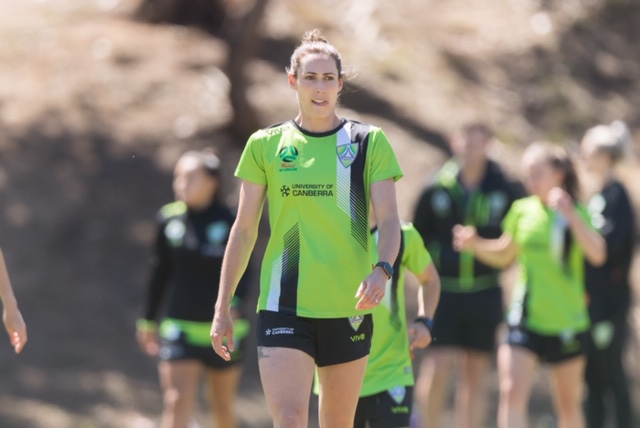 Jess Rasschaert at a Canberra United training session this month at the University of Canberra. Photo: Ben Southall (@bsouthallau).

Jess Rasschaert is poised to make her debut in the W League at an age and stage in life when most have either retired or are at least considering the next phase of their careers.

Jess is 32 and a mother of one, and she now has the opportunity she’s dreamt of for years – a chance to play for Canberra United in Australia’s premier competition for female footballers, the W League.

“Not many people hit their sporting peak in their 30s,” says Jess, “It’s a bit daunting but the girls are really supportive, and I certainly don’t feel out of place.”

Nor should she. Jess has been a star in the ACT Premier League. This year, Jess was named player of the year. She was part of the Blue Devils’ defensive line which only conceded four goals through the entire season.

“I was definitely happy at Belconnen, and I felt as though I was growing as a player.”

Then Canberra United head coach Heather Garriock approached Jess in July asking if she was interested in trialling for United.

She did, and the rest is history.

The W-League will kick off at McKellar Park this Sunday when Canberra United Football Club takes on Perth Glory in the first game of the season. Tim Gavel is with coach Heather Garriock to hear more about the players in the side, from 17-year-old local Hayley Taylor Young to 32-year-old Jess Rasschaert. Here’s more about some of the new faces we’ll be seeing on the field this season.

Posted by The RiotACT on Wednesday, 13 November 2019

For Jess, though, the last few months leading up to this point have been a blur.

“Before this happened, I had always thought about what it might be like to play in the W League, but it’s all happened so quickly.”

Jess already had plenty going on her life as a mother of a two-year-old and working as a physiotherapist. But her self-belief and the belief shown by Jess’ former Blue Devils coach, Antoni Jagarinec, as well as Garriock, got her through.

As Canberra United prepares to play their opening game of the W League season against Perth Glory, Jess is set to make her debut at the same home ground where she plies her trade in the ACT Premier League.

“I’m feeling nervous,” Jess admits. “To make my debut in the W League at home would be awesome.”

The occasion will be just as momentous at the other end of the age spectrum for 17-year-old Hayley Taylor-Young, who is also set to make her debut. 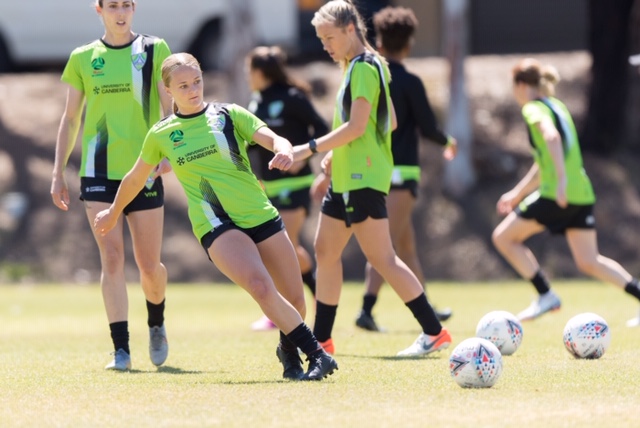 Hayley in training with her Canberra United teammates.

Hayley is the example of how a pathways system can result in a locally developed player making it to the W League. And Hayley recognises that she benefited from this system: “It’s helped me improve as a player with Heather being the CUA coach as well.”

This year Hayley, a Year 11 student at Canberra College, made the decision to focus entirely on football. This meant giving up OZ Tag, but football has always been part of her life as she’s been playing since the age of six.

So on the verge of the biggest moment in her sporting life so far, how is she feeling?

And with Hayley’s family in the crowd cheering her on, her nerves will quickly be replaced by the very determination that got her to the W League.

The stories of Jess and Hayley, two very different sportspeople, are reflective of what is great about sport. Through hard work, relentless determination and generous mentors like Heather Garriock, they’ve reached goals few achieve. And they’re creating new pathways for their successors.

Josh Shirley - 2 hours ago
I had a 3 bedroom 2 bathroom townhouse in Melbourne 30mins from the city and the mortgage was $200 a week cheaper than any re... View
Vanessa McIntosh - 2 hours ago
Remi Fletcher Yvette berry ignores anything that makes her look bad If I was Kerry-Anne I’d be talking to Mark Parton MLA View
William Coats - 2 hours ago
Yes if a house is left empty in the ACT the owner is liable for land tax. View
Lifestyle 18

Garth Kirwin - 4 hours ago
they need to fix these lovelys up.if canberra loses these canberra loses it soul. View
Kathleen Lee - 12 hours ago
What! They are historical buildings. Don't be so silly. View
Glenys Callaghan - 15 hours ago
I love these buildings, they represent Canberra to me. I hope they are never pulled down as they are part of Canberra’s his... View
News 5

HiddenDragon - 8 hours ago
"...the government should let the market do its work and instead focus on cutting rates, charges and land tax as NSW has done... View
Ray Polglaze - 12 hours ago
Do you have evidence to support that assertion? View
Ray Polglaze - 12 hours ago
Barry Morris says "“Let the market sort it out – it will sort it out". But where is the evidence to support that confiden... View
Lifestyle 12

@The_RiotACT @The_RiotACT
Veteran organisations have welcomed the Federal Government's announcement that it will establish a Royal Commission into Defence and Veterans Suicide https://t.co/qpHIPzY1Vh (9 hours ago)