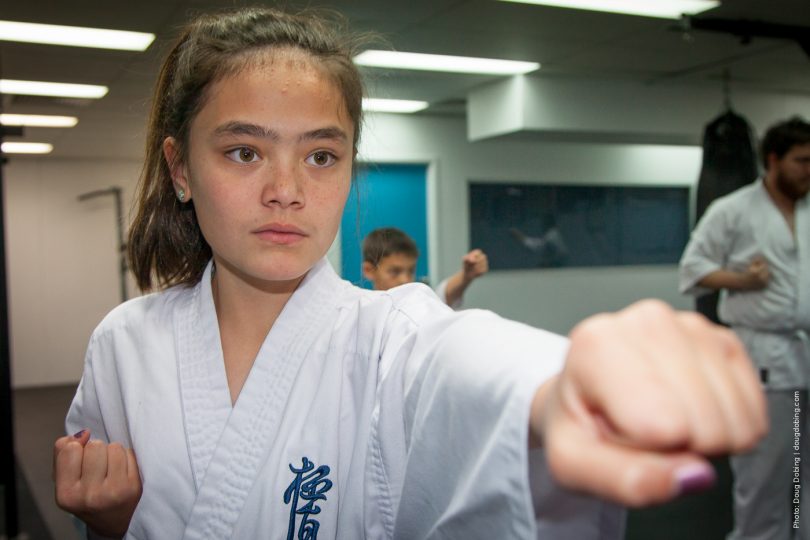 Karate students from around Australia competed in the 2017 Independent Kyokusin Alliance (IKA) national championships at the Australian Institute of Sport, earlier this month.

One hundred and twenty fighters participated in this annual event, with kata (martial arts pattern of movements), controlled-contact and full-contact tournaments.

Sensei Brendon Cunningham, 3rd Dan black belt and owner-operator of the Shinzo Dojo in Mitchell, trained 11 students to compete in this tournament.

“I’ve been doing [karate] for 34 years this year. For everything that I’ve competed in, taught in, I’ve lost more than I’ve won,” said Sensei Cunningham.

“The ones that you win are great. But the ones you lose and learn from is even better again,” he said.

With months of intensive training, he said his students were well prepared, not just for the competition but for life. 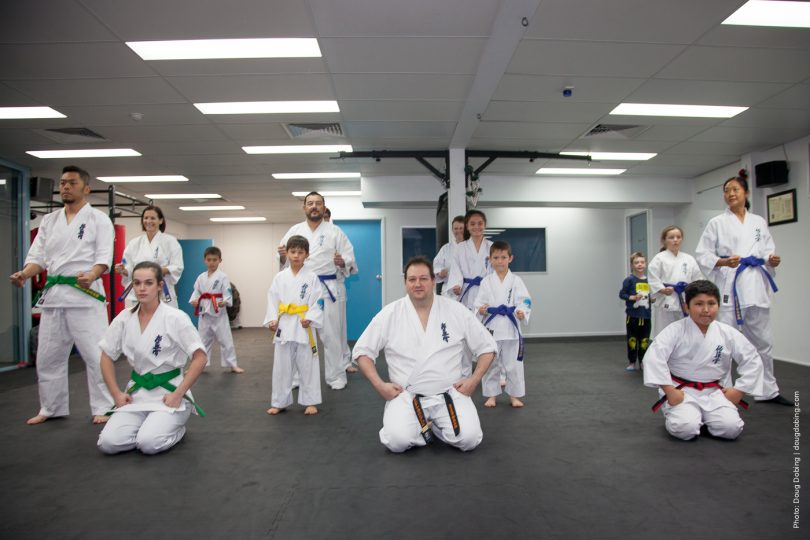 Mary Vella, age 10, girl’s IKA National champion and Arnold classic medallist said she started kyokusin karate at Shinzo Dojo last year. She said she enjoys everything about the sport, the fitness and the competition.

“It’s a really good sport, it’s got fitness and karate and you learn so much,” she said.

This year, Miss Vella competed in the full contact female 10 and 11 years, heavyweight division. This was only her second fight and she took out the Australian title.

“When I walked onto the mat I was a little nervous because she was a black belt. But I wasn’t too scared as well at the same time. I was pretty confident, I guess. I just focused on the fight,” said Miss Vella.

Sensei Cunningham said the biggest thing that people gain out of karate is self-confidence.

“The strength for anyone to learn here is the ability to tell yourself you can actually do it,” he said.

“It doesn’t matter what’s in front of you. It’s you going forward. It has nothing to do with the person in front. So for [Mary] to get over that, is a nervous thing.”

“It comes down to the mental strength of each person, and [Mary] went forward with that. And I knew she would do it. It was awesome.” 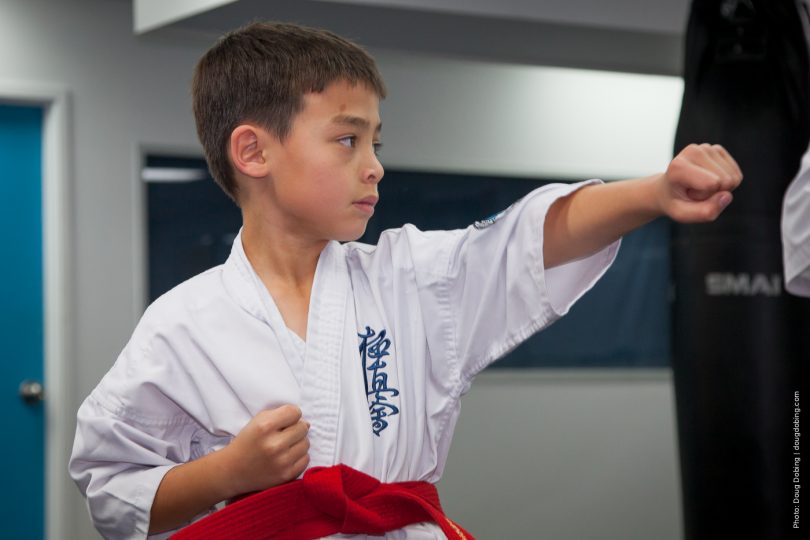 “In the tournament, I turned and I got hit in the face. You can still see the mark,” he said.

Fredrick said he started karate because he was bullied at school and that karate has given him confidence and he now feels braver.

According to Sensei Cunningham, one of the standouts of the full contact competition was Riley Prior, aged six years old. Since there was no class division for his age he fought in the 8 and 9 years age division. 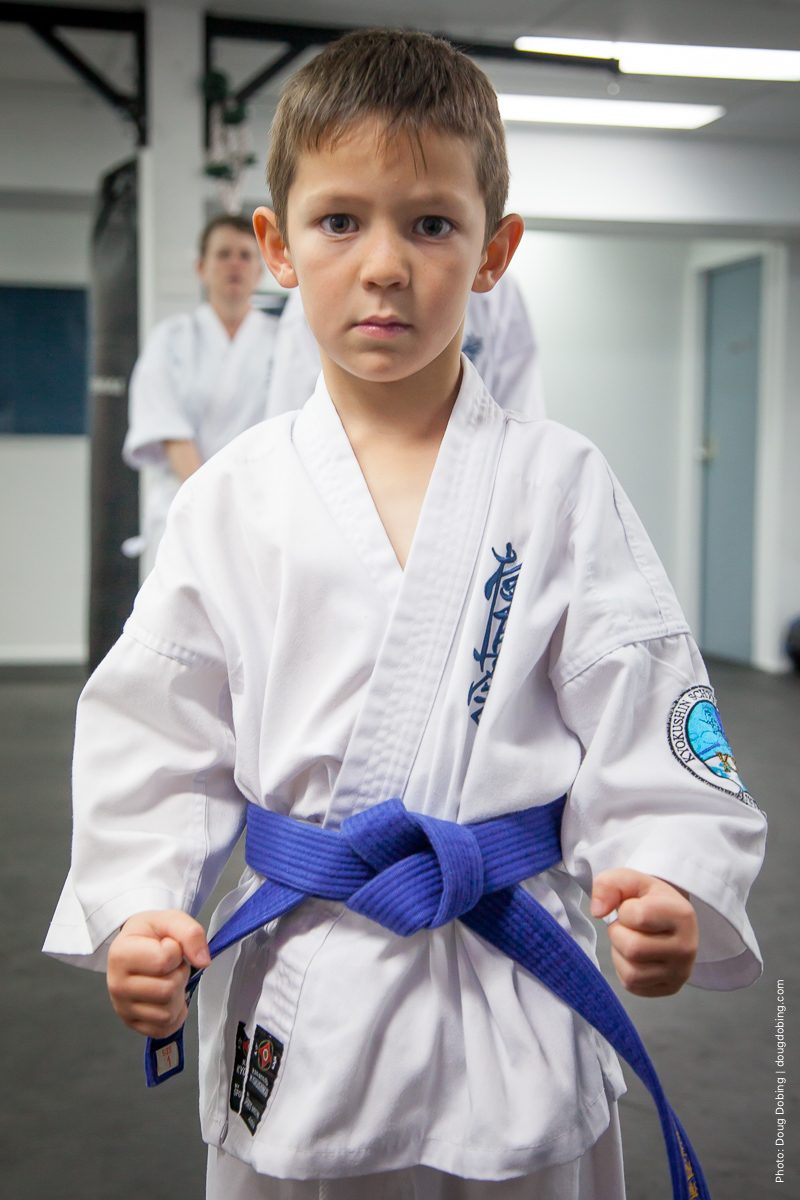 Riley Prior, is going to be the one to watch in future fights. Photo: Doug Dobing.

“He was the most talked about student, especially after that fight. The judges and referees definitely said they couldn’t believe the strength of a six-year-old entering into [the eight-year-old] category,” said Sensei Cunningham.

“And doing as well as he did, he didn’t win. But it wasn’t about that. It was about him going forward,” he said.

“As he gets older, [Riley] is going to be the one to watch because he is already competing at [the] eight and nines [year old class]. So he’s two years ahead of himself and that’s just in mental capacity.”

“I have a wonderful family dojo. Each and every one of these guys support each other, one hundred per cent. In a club environment that is rare and hard to find. That is the amazing thing about this club. That’s what builds this club.”

Karate can help children gain skills to overcome bullying and build self-confidence. Would karate be an effective antibullying program to implement in schools? Let us know what you think in the comments below.

yes, teach it in schools. It’s worked well in Japan and China. It teaches discipline and respect for self and others, and an understanding of what violence is and its potential outcomes.

Congratulations to all of the competitors!

Karate teaches all of the emotional intelligence abilities – self awareness, self control, empathy, social skills, and motivation – there are real social and economic benefits! Yes, teach it schools.