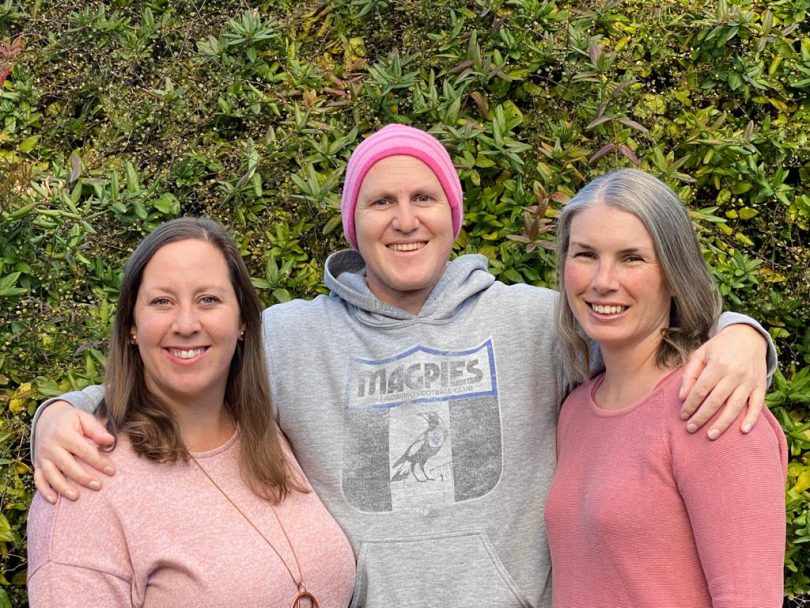 Leanne Graham (left) and Alison Hall (right) will dye their hair pink in support of Steve Hall, who has been diagnosed with breast cancer. Photo: Supplied.

Throughout his life, Steve Hall has had four kinds of cancer, beginning with non-Hodgkin’s lymphoma at age 14 to being treated for breast cancer now at 40.

Breast cancer is not typically associated with males, but thousands of Australian men – one in 670 to be specific – are diagnosed with it every year.

This June, Steve’s wife, Alison, and his sister, Leanne, are dying their hair pink as part of the National Breast Cancer Foundation’s Go Pink campaign.

Alison thanks the foundation for the work it has done during the years, saying that without it, Steve’s treatment would have been much harder.

“Because my husband has had cancer before, there were certain treatments he could not have anymore,” she says.

“If we did not have the people doing the research who had gotten to this stage, they would not have known about all the other ways they can still treat him.

“So it is a really nice idea to support the people who have gotten us to the point we are at now.”

READ ALSO: It’s 2021, how are religious schools still a thing?

Steve says that while there have been leaps and bounds made in cancer treatments since he first underwent chemotherapy 25 years ago as a teenager, the current bouts of chemo are still very draining.

He then had a squamous cell carcinoma removed from his tongue when he was 33.

“Going through cancer was not a new experience for me, but certainly I was not expecting to have breast cancer,” he says.

“I had a mastectomy in March [2021] and was only the fourth man the surgeon had [performed the procedure] on.

“I think I recovered quite well from the surgical procedure, but I am now on my third round of chemotherapy, and that knocks you around a bit.”

Only around one per cent of breast cancers in Australia occur in men.

Alison and Leanne will be receiving their new hairstyles at 5:00 pm on Thursday, 3 June, at Creative Image Hairdressers in Kambah.

Canberrans are welcome to join in at the salon on ‘dye day’ and come dressed in pink. The event will also be livestreamed on Alison and Leanne’s respective Instagram accounts, @alisonsarahhall and @leannehg.

There will be pink food and drinks, raffles and a chance to colour yourself pink, too.

You can donate to their fundraiser here.

More information about breast cancer and the National Breast Cancer Foundation can be found here.

austted - 30 minutes ago
There is a good reason why our early settlers planted deciduous trees near their houses. We need to get away from this myth t... View
TimboinOz - 4 hours ago
We have three gum trees close to the street - probably in TCSS's area, and I wouldn't be without them. Yes, there's a risk. View
News 33

phydeaux - 31 minutes ago
I doubt the present value of the QR system compared with its original use, although I am extremely confident it never did hav... View
phydeaux - 41 minutes ago
TheSilver, I recall you have previously been asked for the references for those studies but I do not recall seeing a response... View
jorie1 - 1 hour ago
I disagree with you. The governments over-reacted and there will be a big backlash against them for the way they have mistrea... View
News 230

Jimbo Lambert - 54 minutes ago
Justo Justo some people have driven that stretch of road for 30 or 40 years at 60km/h. If they suddenly reduce the limit it i... View
Dean Soccol - 2 hours ago
Nathan Grieve in Queensland every time we get a fine we lose points. So if you are one of those that don’t care about the m... View
Nathan Grieve - 3 hours ago
Andrew Nelson not every offence comes with demerit points, so unfortunately that statement is incorrect View
Community 8

@the_riotact @The_RiotACT
Extension of support for #Canberra businesses - especially small #businesses - is welcome, but will it be enough to keep them from disappearing? Local experts have their doubts https://t.co/o4s1D2OGsv (55 minutes ago)