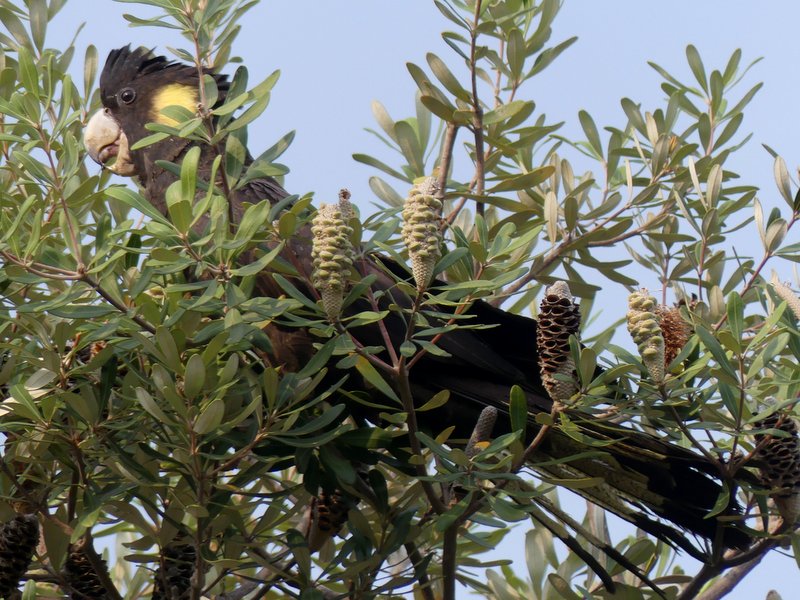 When I first arrived in Canberra, a very long time ago now, I came upon a Field Guide to Banksias and thought it was a hoax. You know, along the lines of the fad that recurs sporadically, a little book entitled The Wit and Wisdom of (insert a prominent politician’s name) and the book is blank.

I’d come from South Australia, where there are just two banksia species, and it hadn’t occurred to me that in the wider world there might be enough of them to warrant an entire field guide.

In fact, there are some 170 banksia species, all Australian (though one extends to New Guinea); at least 150 of them are from south-western Western Australia, which knows no restraint when it comes to floral diversity (an excellent place to sample some of this diversity will be the new banksia garden at the National Botanic Gardens; it’s ready, but for obvious reasons, the opening’s been delayed.) 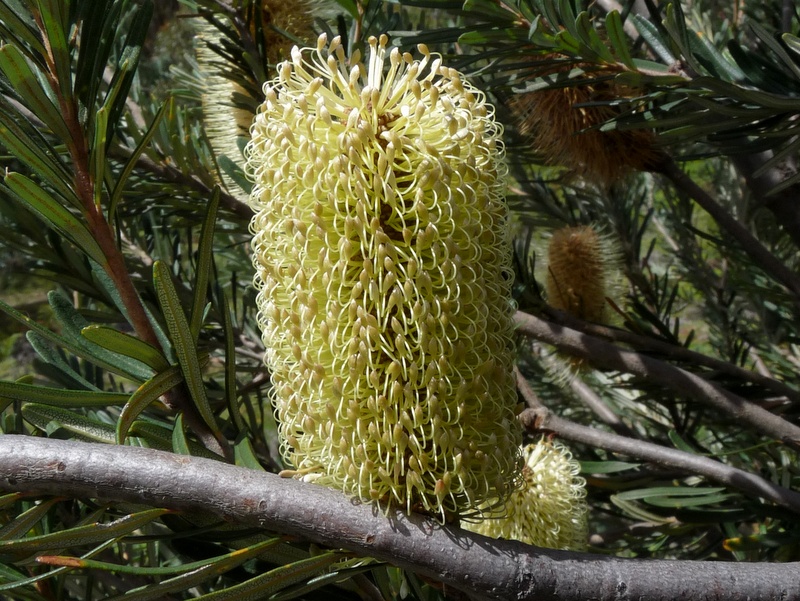 A Silver Banksia flower is actually a spike of hundreds of little grevillea-like flowers.

Only one banksia grows naturally in the ACT and, to my surprise at the time, it is one of the two that I knew from South Australia. Our Silver Banksia (Banskia marginata) has one of the biggest ranges of any banksia, growing from Eyre Peninsula to Tasmania and northern New South Wales.

Locally it’s mainly found in the lower ranges. The main valley at Tidbinbilla is a good place to see it but is widely grown in Canberra. We have one that towers over our Duffy townhouse, and we can watch honeyeaters and parrots feeding on the blossoms and cones from our bedroom. Indeed it’s flowering right now.

Autumn flowering is a feature of many banksias and they provide a very important energy boost to birds, insects and mammals at a time of relatively few flowers. The Grey-headed Fruit Bats visit nightly from the Commonwealth Park camp more than 10 kilometres away, slurping nectar and shrieking their outrage at any other bat which seeks to share their feast. 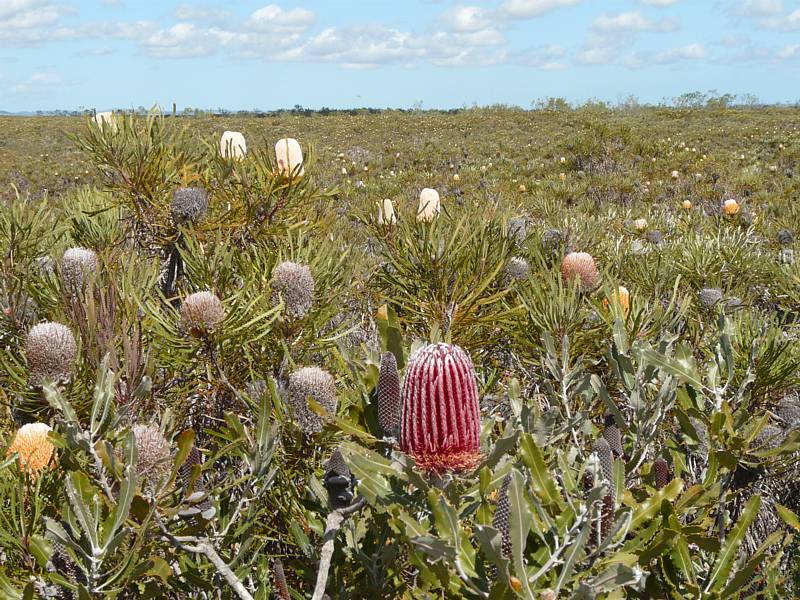 In the daytime the Red Wattlebirds are equally proprietorial, furiously chasing away any smaller bird which dares to dip a beak into one of their flowers, though there is far more nectar on tap than the wattlebirds could possibly imbibe. I do wonder sometimes if they don’t use up more energy in defending the tree than they get from it, but nature, unlike us, isn’t that illogical.

Before the days get too cold swarms of hoverflies, native bees, wasps and butterflies slip beneath the wattlebirds’ radar to take their share, and spiders, dragonflies, robber flies, fantails and thornbills prey on them.

Perhaps the most exciting visitors, however, come when the cones are ripening, with nutritious big seeds growing from the spike of flowers which one or other of the nectar-seekers have pollinated. The huge Yellow-tailed Black-Cockatoos come usually in small flocks of up to half a dozen, squealing quietly to each other and dropping discarded cones with loud clunks onto the balcony.

They feed for a while then slip away again, leaving a gap in the world. It’s a good day when they drop by. 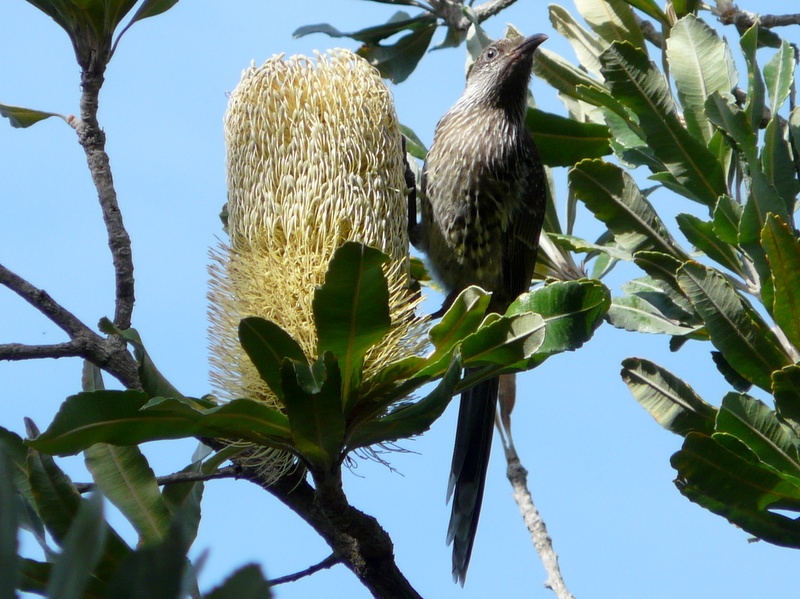 Little Wattlebird on Saw Banksia, Guerilla Bay. This banksia was the first to be formally described.

At Canberrans’ other home on the south coast, Silver Banksias are joined by another four species, ranging from shrubs to 20 m tall trees. One of these, the magnificently gnarled and warty-barked Saw Banksia, was one of four species collected by botanists Sir Joseph Banks and Daniel Solander at Botany Bay on 29 April 1770 – just a few weeks more than 250 years ago.

It later became the species to which the name Banksia, honouring Sir Joseph, was attached, when Swedish Linnaeus the Younger, son of the more famous Carl Linnaeus, described it 12 years later. With specimens pouring into Europe from lands new to their scientists, there was a long waitlist for formal descriptions.

Banksias are among my very favourite Australian plants, and they’re brightening the world right now. That’s a very valuable contribution at the moment.

You’re lucky to still be getting those birds, used to see reds and yellows regularly in my area
but not for thirty years.

We’ve had a pair visit a lot recently. So beautiful 😍

What about in the home garden? Do they make a good display when grouped together in a mass planting?

Sure Elizabeth, but be wary of coastal ones which won’t like clay soil or frosts. And be aware that the local Silver Banksia can become a very large plant.

When I was younger I climbed to the top of Pidgeon House Mountain inland from Ulladulla and was amazed to find some Banksias growing there .

Went down Wheelbarrow Rd, past Pigeon House Mtn in ’74 on way to Yadboro, beautiful spot and worth the trip.

One of my favourite reads is “Pigeon House and Beyond” by The Budawang Commitee.

They are regular visitors in Latham.

We spotted 2 black cockatoos this week in Harrison.

Rowan Hartcher - 10 hours ago
Alan Hopkins like wise View
Peter Quinn - 11 hours ago
So when can we celebrate colonisation????. Whatever day is nominated it will always be contested View
Alan Hopkins - 11 hours ago
its not that hard to change the day. just do it... View
Opinion 24

Magpie Allan - 18 hours ago
Undoubtedly the two icons are among two of the greatest men you’ll could ever meet.... View
Breaking 5