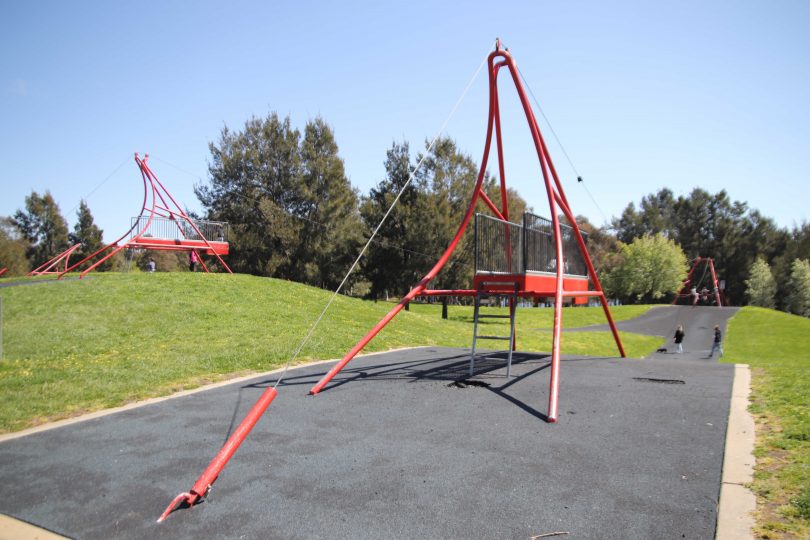 Two of the major attractions at Yerrabi Pond District Park in Gungahlin have been temporarily closed, with blame lying at the feet of vandals.

An ACT Government spokesperson said two flying foxes were removed on Friday, 17 September, due to vandalism to the rubber soft-fall under the structures creating safety issues.

“The ACT Government already had in place plans to replace the rubber soft-fall before the end of 2021, and is now investigating if the replacement of the material and reinstatement of the flying fox can be undertaken sooner,” said a spokesperson.

Yerrabi Pond District Park includes a large playground, barbecue area and plenty of parking off Wunderlich Street. Most famously, it is home to two of the biggest flying foxes in Canberra.

The news of their closure has been met with disappointment from many locals. 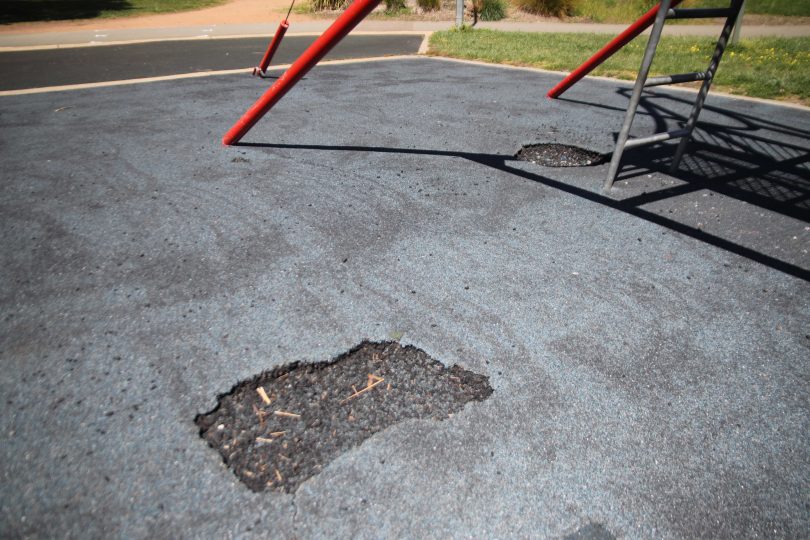 Canberra mum Astoria Bright has been exploring all of the ACT’s playgrounds since last year with her son, Elijah. These experiences have been collated on her website, Playgrounds of Canberra, and ranked according to popularity.

Astoria says vandalism at playgrounds is a regular and recurring issue which is hard to get on top of. More often than not, the mess is left to ACT City Services to deal with.

“I have seen one event of intentional vandalism during the past six months,” she says. “Passing through Kambah Adventure Park one morning, I spotted school-aged teenagers intentionally causing damage to the liberty swing, a fenced part of the playground meant for wheelchair users.

“It can be quite daunting when you’re with your child or family. For your own safety, why would you approach them?”

Astoria says the most prolific form of playground vandalism is graffiti. “This is so saddening to see as the ACT Government has provided many legal graffiti sites across Canberra,” she says. “Graffiti affects the visual enjoyability of the playground, especially when it’s offensive, threatening, racist or plain obscene.”

Astoria says it is important to report suspected incidences of vandalism to Access Canberra’s Fix My Street portal, but to also bear in mind that not everything will be the result of deliberate damage as play equipment wears out and eventually breaks over time.

“A parent could simply be playing on a seesaw when the lifespan of the spring gives out,” she says. “The person could then leave the park thinking scheduled checks will catch the problem. The next person after them may then presume vandalism has occurred.”

Whatever the case, Astoria says that all things considered, ACT City Services does a good job getting damaged play equipment up to scratch again. 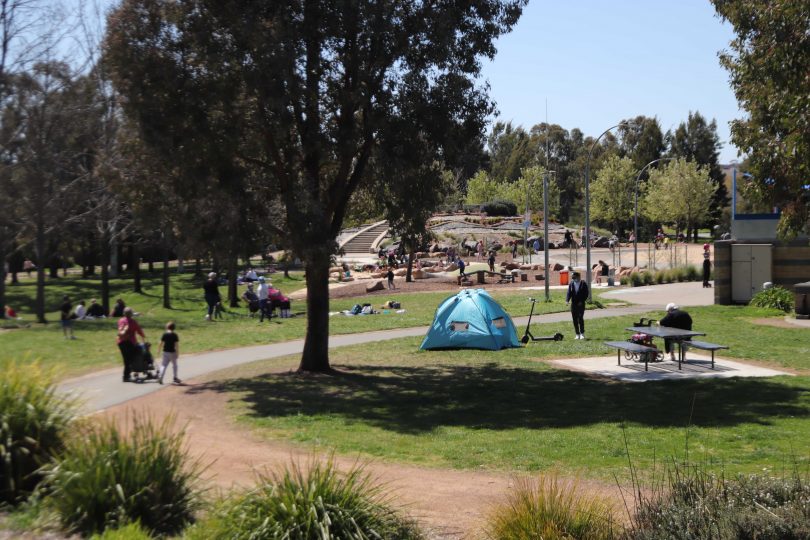 “I have lodged a significant number of ‘Fix My Street’ reports in regards to playgrounds, and have seen positive results come from many,” she says.

In the case of graffiti, a fast resolution can deter a person from repeating it. Although Astoria sees a stronger deterrent in CCTV cameras.

“We have zero form of CCTV footage in our playgrounds, not even in the major district ones such as Yerrabi Pond District Park, John Knight Memorial Park, Boundless and Kambah Adventure Park,” says Astoria.

The closest playground equipped with this level of security is Goulburn’s iconic Victoria Park, which is watched over by a total of 21 CCTV cameras.

“It is my hope that ACT City Services continues with repairs of vandalised equipment, and trials CCTV surveillance on one of Canberra’s major playgrounds to see if it prevents future vandalism,” says Astoria.

She says there is an important need to see the flying fox duo return to Yerrabi Pond District Park because it is “nearly one of the last of its kind left in Canberra as we move towards more modern ‘destination playgrounds'”.

Paul Azar this is why Will couldn’t ride it!

Basketball rings at Moncrieff park to

Tegan Lakey you’ll be pleased to hear that Moncrieff Community Park is on the priority list for ‘Minor improvements’ which hopefully will have the hoop replaced.

Tegan Lakey hello 👋 good news the hoop has been fixed!

Sarah Kristine What is wrong with people? 🤦‍♂️

Every time a new structure is built a Game Camera needs to be set up some where it can be seen in, then these people can be caught and locked up for a few years.

Pete Macca like that would help, there’s no repercussions to doing stuff like this the crime rate has sky rocketed ever since there was a “gentle” parenting approach doesn’t teach children that if they do bad things there is a punishment involved

Instead of being told if you do this then this means you deface public property which is bad..

Pete Macca cctv rarely catches anyone, even the very violent criminals.
Its useless for teens in hoodies who would just get a talking to if they get caught. 🤦🏼‍♀️
Perhaps a regular police patrol would help

Lori J Tas There is only 1 Police Officer to every 2,500 people in Canberra which makes it had for them to catch anybody.

Pete Macca yes but they all have lives where they spend time outside, I’m not saying this should be during work time, just donning a hoodie while going about daily life might help remind silly teens they’re about.

Slow news day. Should make an article about the dangerous bees of spring next