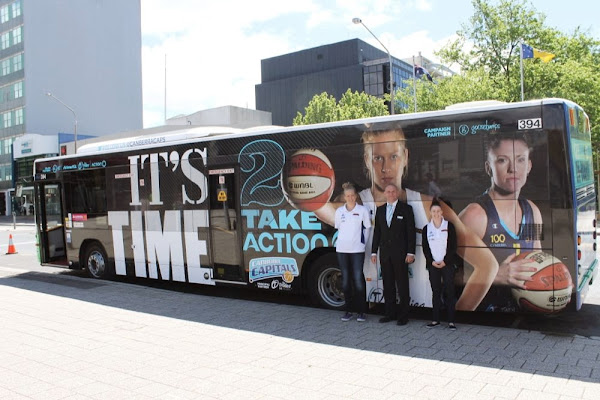 The Canberra Capitals have unveiled their bus wrap for this season:

The bus livery is part of ACTION’s sponsorship of the benchmark female sporting team along with game day promotions and appearances by Capitals players at ACTION events throughout the year.

Australian basketball icon Lauren Jackson who is returning to Canberra next season is prominently displayed on one side of the bus, whilst current Capitals stars Abby Bishop and Natalie Hurst feature on the other.

The special ACTION bus will be used during the WNBL season as a shuttle service for fans to Capitals home games but was put into regular service by ACTION immediately following the unveiling.

One Response to Capitals’ bus wrap 2013/14. This time they’re a team!
Filter
Showing only Website comments

I thought sports were meant to be fun…

Sue West - 3 minutes ago
Emma Matthews lunch here one day? View
Meredith Walton - 7 minutes ago
Ro Rowan Lang next breakfast adventure? View
Suzanne McInnes - 12 hours ago
Ken McInnes it is a lovely friendly place to go with great food. We have been there for breakfast on many sad occasions. With... View
News 32

Nell Feneck - 3 minutes ago
David Malcolm good they shouldn’t have to... View
Cosmo Skourtis - 14 minutes ago
Manoli Logus the marathon back to the car makes it nice View
Kimmy Hunter - 38 minutes ago
most of the time when I go with family we struggle to find a carpark View
Lifestyle 4

Rachel Spangaro Morris - 30 minutes ago
Ashley McBride the bodysuit extenders? Yep they’re amazing we used with Aldo! Allowed us to skip every second size of bodys... View
Ashley McBride - 37 minutes ago
Rachel that ‘snappy’ is an amazing idea!! View
Jackie White - 14 hours ago
Jane Kim messy yeah! Scary, nope. Crazy how such a basic necessity has changed in a few decades isn’t it!... View
News 28

Alex SmilyLex - 7 hours ago
And men cannot legally take their children to a men's refuge unless they are no longer children even if the mother has taken... View
HiddenDragon - 14 hours ago
Given the extent of the policy osmosis between Victoria and the ACT, something like the private-public housing partnership de... View
News 12

Ol L - 23 hours ago
People are saying in other posts that dual occs fix this. No they don’t. A house near us was rented for $500 per week. When... View
show more show less
*Results are based on activity within last 7 days