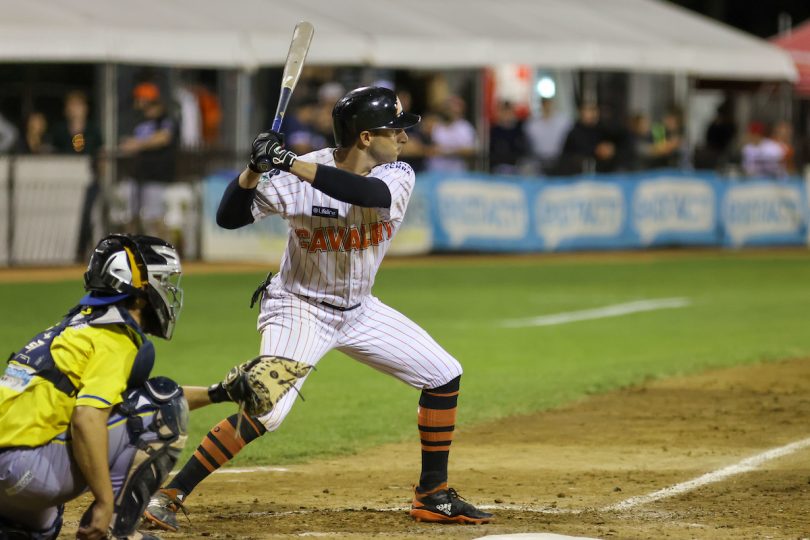 The Canberra Cavalry baseball franchise is still in the ball game after Canberra pair Brendan Major and Illya Mastoris stepped up to the plate to become the team’s new owners, after the collapse of the previous ownership with debts of more than $400,000.

Both have long-running connections to the franchise and baseball community – Mr Major’s IT company MIT Services has been a sponsor for the past five years and holds the naming rights to Narrabundah Ballpark and Mr Mastoris, also in IT, spent six years running food and beverage sales and corporate hospitality at the Ballpark.

The pair are now 50-50 owners after Baseball Australia granted their company Infielder Pty Ltd a licence to operate the Cavalry franchise in the Australian Baseball League, and are pledging to include as much Australian and ACT talent as possible and promote the game in Canberra.

They have retained general manager Sunny Singh, but apart from some former players expressing an interest in the new structure and some of last season’s contracted players possibly returning, it is new ownership with no connection to the previous company now in administration.

“We’re just fans who have been given an opportunity to step in and keep the team going,” Mr Mastoris told Region Media.

He said the new structure was a completely separate entity.

“All that stuff is behind us and we’re planning for a bright future with many championships to come,” he said.

But they are starting from scratch, without a coach or player signed.

“We’ve already had discussions with some of our local talent about continuing on under a new management structure and those will progress over the next couple of weeks,” Mr Mastoris said.

“Hopefully we will be able to make some announcements by the end of next week.”

They do have a coach in mind but can’t say who that is yet.

While hoping to field as much as an Australian team as possible, they are in contact with clubs in the US and Asia about imported talent.

“Where possible we want to have the best available Australian talent to fill key spots on the roster,” Mr Mastoris said.

“Some coming back from college, couple of guys have played at the highest levels in national representation and in minor leagues in the US.

“We’ll target players that we feel are the best bang for the buck on our roster and make that investment.”

The club will need to provide the ABL with a team roster at least 30 days before the start of the season, and the new owners still need to work out the finer details about all the requirements.

But Baseball Australia has welcomed the news, saying Infielder has an exciting vision for the continued growth and success of the Cavalry and the sport of baseball in Canberra,

“We are looking forward to working closely with all of our sport’s stakeholders in Canberra to help make this vision a reality,” Baseball Australia chief executive Glenn Williams said.

As has former Cavs pitcher Steven Kent, who had blasted the previous ownership.

“The Cavalry now finally have license holders who are passionate about growing the game, who will look after their players, who want to win and who are determined to give a great experience to fans, members and volunteers,” Kent posted on social media.

Mr Mastoris said the long-term plan was to build a fully Canberra team and develop the game so the club did not have to rely on interstate or overseas players.

“The more we can encourage the growth of the game here in Canberra and partner with Baseball Canberra and the local clubs to build that strength in the juniors and hopefully through into the seniors as time goes on, that will take a lot of pressure off the need to bring in players from overseas and the related expense,” he said.

But the club will still face having to pay for imported players to quarantine due to the COVID-19 pandemic, and Mr Mastoris said the sooner everyone is vaccinated the better, particularly in the US which is a key source of players.

Mr Mastoris said the new ownership was committed to the whole baseball community in Canberra.

“We want to make this a successful franchise not just for ourselves and players, we’ve got some really amazing dyed in the wool members and fans,” he said.

Sam maybe you will get a call up.