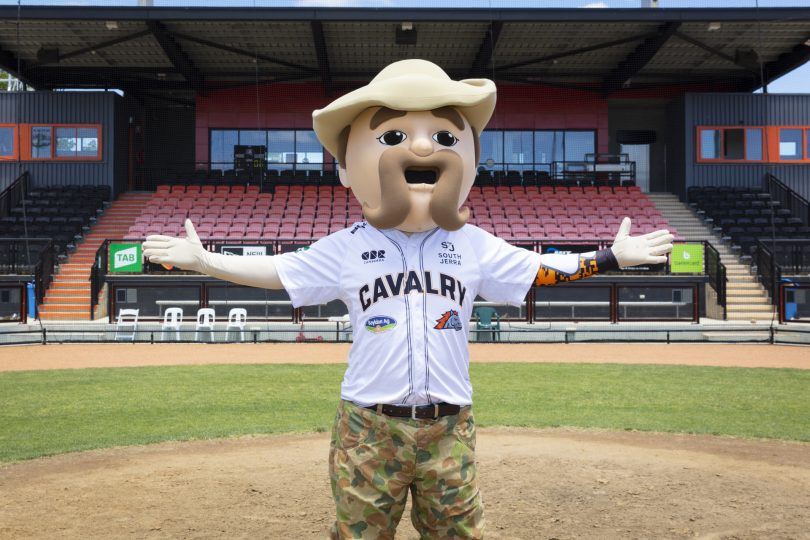 Canberra Cavalry mascot Sarge is known for doing the hard yards for a good cause and he’s about to do it again, donning the full suit to walk 10 km to raise at least $10,000 for Lifeline.

This will be no stroll in the ballpark with Sarge making the trek on what could be a typically hot summer’s day on 30 January.

Sarge will walk from Bentspoke at Braddon to MIT Ballpark at Narrabundah ahead of an ABL game. The Cav’s opponent is still to be announced as much of the competition is being rescheduled due to COVID-19 travel restrictions. 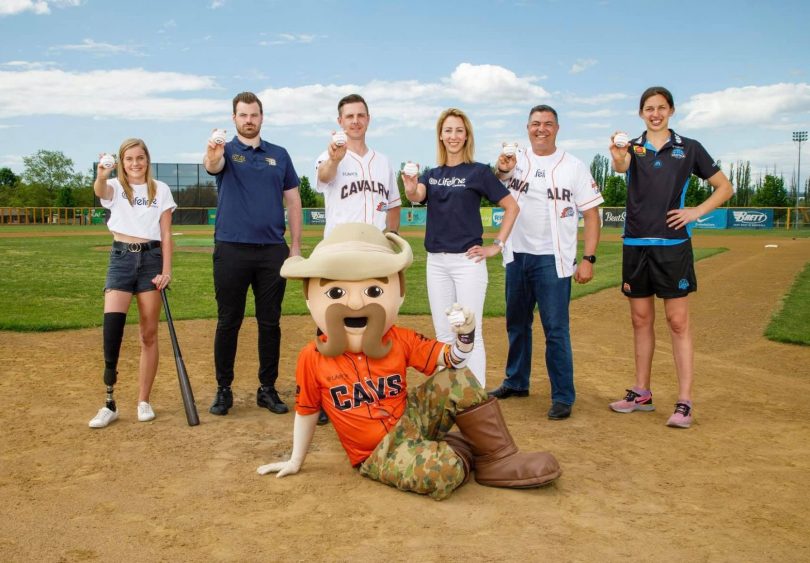 Lifeline Canberra CEO Carrie Leeson will also be walking every step of the way with Sarge. She said it was heartening to see so many people wanting to be involved this year.

“There are so many incredible people in our community, and despite the year that we’ve had, we’ve also got these incredible people like Josh who are doing remarkable things to bolster our service and remove the stigma around mental health and start a conversation,” Ms Leeson said.

“There’s a lot of distress in the community at so many levels, but it doesn’t need to be COVID that is triggering you or making you feel stressed. It could be a relationship or a work situation, your own personal health or that of a loved one. It could be your children. Those problems haven’t left us, and it’s important to acknowledge and validate your feelings around those things.”

READ ALSO: The Canberra athletes most likely to inspire in 2021

The convoy doing the walk won’t be hard to miss, with the Lifeline semi-trailer from Tony Innaimo Transport creating a buffer (and perhaps some much-needed shade for the walkers).

Josh Williams has already been stepping out to prepare and round up support to make sure they hit the target.

“People can donate via a link on Sarge’s Facebook page and also get along to the game or donate at a couple of the locations we will stop at along the way to the Ballpark at Narrabundah,” Josh said.

“As a Lifeline ambassador, it means a lot to be doing something as simple as walking 10 km, but it’s also great to have such a fantastic community behind the walk, and I have no doubt that we’ll raise at least another $10,000 for Lifeline.”

To get involved, visit Sarge’s 10 k for 10 k via his personal challenge page.

We love Sarge! Thank you for continuing to support the vital work we do in the Canberra community. Bring on Jan 30!

Phill Martin - 6 hours ago
La Niña was forecast by the Bureau of Meteorology in the middle of last year, so 'summer' was exactly as I had expected it t... View
Capital Retro - 21 hours ago
Given we were told last year's hot, summer weather was the new norm, does this mean this year's coolest summer in 10 years sh... View
Kay Makin - 21 hours ago
Amanda McLean this looks like one of your beautiful water paintings. View
News 67

Graham Byrne - 7 hours ago
I was wondering what all those cameras were about. They are everywhere. But I’d rather see more red light cameras. View
Property 14

JS9 - 8 hours ago
Absolutely agree Brendan. Unlike some on here who seem to see apartments as almost the work of the devil, I don't mind densif... View
HiddenDragon - 9 hours ago
Hooray! - we're one of the richest (on paper) countries in the world with one of the dumbest economies - having dropped from... View
bj_ACT - 14 hours ago
ACT Government should be mandating apartment buildings with 3 bedrooms or large two bedroom units with multiple living areas.... View
News 7

Mike of Canberra - 8 hours ago
Over many years, the only consistency I've seen from the green-left is their apparent dislike of ordinary working people actu... View
News 6

steve2020 - 10 hours ago
The disrespect towards women had been encountered in many workplaces that I had worked in, in Canberra. The irony is that bec... View
jybrik - 17 hours ago
What a thoughtless, demeaning comment. "So, get over it" is a sentiment that we as a society should be fighting against, as i... View
Business 1

Nick Swain - 10 hours ago
Even in the hardest lock down time Green Square was the place to hang out - there was a strong sense of community. Many of us... View
Community 25

Bernard - 20 hours ago
Problem ACT Government have with promotions and perceptions (possibly the realities) of conflicts of interest are nothing new... View
Motoring 2

keek - 21 hours ago
Yeah, you basically have to ride like everybody else on the road is trying to kill you. People trying to change lanes on top... View
Lifestyle 29

Jackie White - 21 hours ago
There's always one or two hanging around my place each year, but without fail, they wander into the neighbour's yard and her... View
show more show less
*Results are based on activity within last 7 days

@The_RiotACT @The_RiotACT
What do you think of Allycorn? The giant pink unicorn will grace Canberra's skies as part of the Canberra Balloon Spectacular! Here's where you can catch this fantastic creation, and say hello to Skywhale and Skywhalepapa https://t.co/6Nw9532xSJ (9 hours ago)

@The_RiotACT @The_RiotACT
With a long weekend coming up in the ACT, there’s lots to see and do in Canberra as Enlighten gets into full swing https://t.co/FoK8puPWeE (11 hours ago)

@The_RiotACT @The_RiotACT
The ACT Coroner found difficulties with staffing, and insufficient staff education were two of many factors that contributed to four deaths at Canberra Hospital in 2015 and 2016 https://t.co/e9DTYUNM6v (13 hours ago)