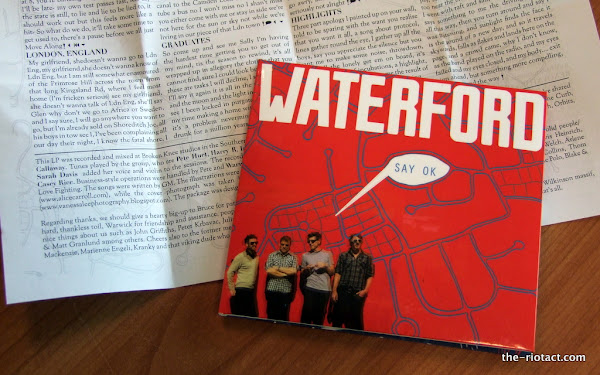 Everybody loves a bit of brit-pop indie-rock and on first listen to Waterford’s new album ‘Say OK’, it seems some love it more than others. Waterford have found a genre which works particularly well for them and have decided to stick with it for 45 merry old minutes.

Fortunately, they pull off the genre well and with confidence. The songs, though all similar in sound, are consistently pleasing and polished.

These band members work together well with no one striving for the spot light, and as a result the songs are cohesive and the album flows naturally. This made me zone out a little bit and found that I wasn’t paying as much attention as I wanted to.

The production element is flawless. The instruments and vocals are well mixed and everything can be heard clearly.

The packaging references Canberra, so I like it even though I don’t think it does justice to the audio. It would have been nice to have a booklet instead of a folded piece of paper, but local musos gotta save money where they can.

All in all, Waterford have produced a good album which is ultimately listenable and enjoyable – even if a little bland.

[ED – Those who like listening to lyrics will probably like it a lot more. I’d rate it as an album to listen to with the lights down and a bottle of red.

If you’re interested the band are launching the CD on 18 November at the Polish Club with the Ellis Collective: 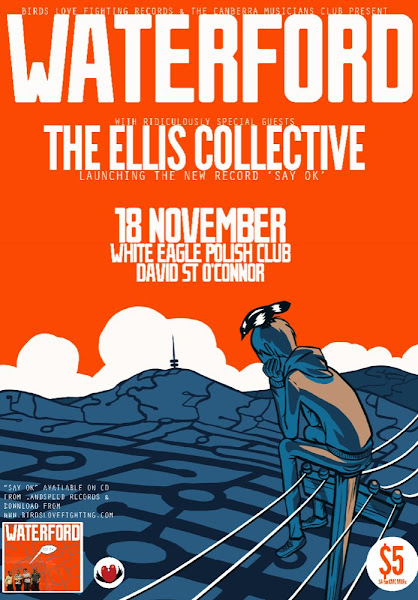 The album can be bought from Landspeed Records in Garema Place.]

If I wanted to listen to original music that sounded like generic, run-of-the-mill pub tunes, I’d hang out at KingO’s on Saturday nights .. just sayin’

I want one! I think it looks fantastic.

Was a pleasant surprise to hear the single getting a workout on Triple J’s new channel….

At least it’s not about Eastman, as I thought when I read ‘Waterford’. Unless you play it backwards…

Adele Craven - 5 hours ago
Renee Mae RiotAct has had lots of opportunities to understand and present up-to-date info, but have refused to - instead cont... View
Food & Wine 14

Dom Polegubic - 6 hours ago
Enjoy an evening with Andy Bernal Saturday the 19th of June at the Australian Croatian Club in Turner. Includes dinner and a... View
Opinion 5

Marisa Navarro - 9 hours ago
Linda Navarro i’ll just keep them! View
Bek Clark - 10 hours ago
Lucinda it depends on the category; and while it was a different specialty I can confirm, private specialist consult with a d... View
Paige Johnson - 11 hours ago
Why though? Shortage of staff/surgeon? I’m genuinely curious to know why. View
Community 3

jorie1 - 15 hours ago
Agree! I guess I prefer tangible things like property, and most of my tenants are great. I try to be a good landlord, but the... View
News 1

Signs & Symbols are making a not so quiet come back

@The_RiotACT @The_RiotACT
The wrestling career of Canberra's @mikey_broderick has taken him around the world. Now he is back in town in a show for the whole family https://t.co/JBxA8ZEQg7 (5 hours ago)

@The_RiotACT @The_RiotACT
The ACT is looking to diversify the economics of the CBD as the work from home culture means fewer workers in city offices https://t.co/J1DoofRqD5 (8 hours ago)