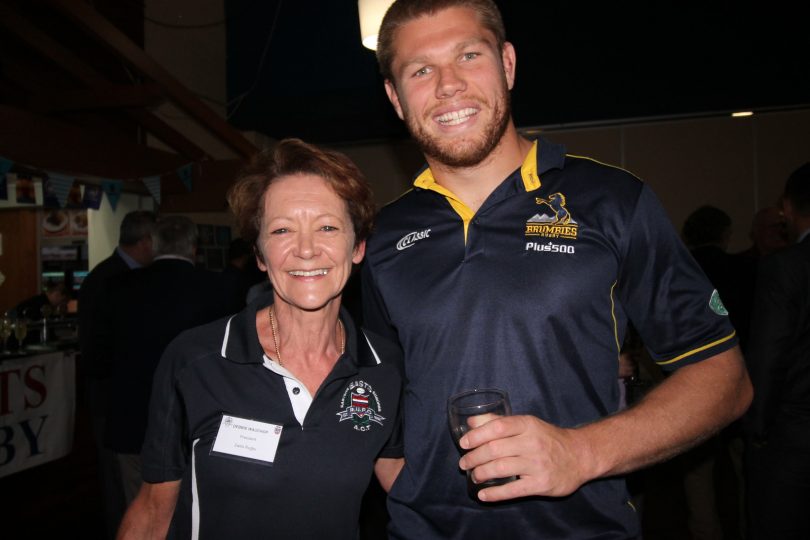 The name Wauchop is ingrained in Brumbies and Eastern Suburbs club’s history.

Everyone in the club recognises the name Wauchop thanks to Graham “Choppy” Wauchop, who was an Easts stalwart in the 60’s and 70’s and also played a major role as the Brumbies’ Chairman in the club’s early days as the Brumbies moved from amateur to professional in the 90’s.

But now a different Wauchop is at the helm at Easts after the club elected Choppy’s wife Debbie as the club president for 2018.

Debbie’s first involvement in rugby union was as a supporter and it was due to her late husband’s influence that Easts approached her to help rebuild the club. It wasn’t a hard decision for Debbie to make.

Debbie has a strong passion for community rugby and has put countless hours of work in to help build Easts back to the great club it once was.

Easts have been through a rollercoaster of a time through their 80 years, with thieves ransacking Easts’ training facilities and causing more than $15,000 worth of damage in 2015.

“And the last few months have been filled with a lot of changes and huge changes to the coaching side of things and lots of new players. It’s been exhausting!”

This week, the Brumbies are celebrating women in rugby, which Debbie applauds even if it is with a little disappointment.

“Celebrating women in rugby round is a positive thing because it gives women a profile but the sad thing is that we don’t already have a stronger profile.”

“I think there are only four women’s teams in the community club competition and it has been years, maybe even 10 years, since Easts had a women’s rugby team and it is one of our goals for next year to have a women’s side.”

The Eastern Suburbs RUFC are celebrating their own Ladies Day this Saturday, which is an event the players organise to recognise the women behind the scenes at the club. Saturday is packed with rugby union action, with the start of the first round of John I Dent Cup.

The Brumbies are celebrating ‘Women in Rugby’ this weekend, which shines a light on players right through to the volunteers that help support the rugby community.

From 5 pm watch Super W action as the Brumbies go up against the Western Force. As a special offer, arrive before 5.30 pm and pay just $5 entry at the gate and don’t forget one of the biggest matches in the Super Rugby Australian conference when the Brumbies take on the Reds at 7:45 pm.

Brumbies new Family Super Pass Ticket is the perfect option for families wanting to see the game which allows families to see three games for the price of two.

Enjoy entry into the game this weekend, plus two Sunday afternoon games at the family-friendly kick-off time of 4:05 pm.

You can purchase individual game-day tickets or the Family Super Pass here.

Sean Nicholls - 5 hours ago
I have leave that day! I'm in. View
Lindsay Burrows - 7 hours ago
Lisa Couacaud fine. I’ll drink for both of you View
Lisa Couacaud - 9 hours ago
Kate Sullivan but practice makes perfect View
News 11

ACT Fire and Rescue (ACTFR) has warned Canberrans living on the urban fringe that the SES is not door-knocking, following...

@The_RiotACT @The_RiotACT
Bushfire victims who have lost key documents issued in the ACT, such as birth certificates, can have them replaced free of charge, the ACT Government has announced. Ian Bushnell has the details https://t.co/1hyruhZpUM (21 minutes ago)