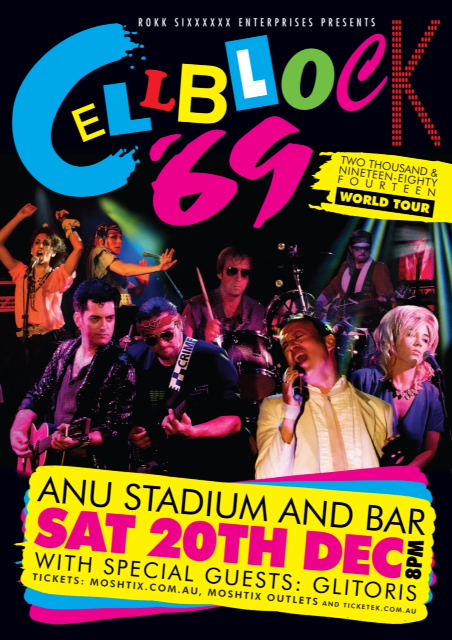 Following the totally awesome reinvention of Corey last year, Cell Block 69 are back to prove yet again, why they are number one – or at least why they should have been number one anyway.

Cell Block 69 are survivors. Sticks and tricks man Corey RoKK SiXXXxxXXX has only one original limb after a series of unlucky incidents throughout Cell Block 69’s career. Former guitarist Corey Spelling had that horrible accident back in two thousand and nineteen eighty six when he fell offstage and broke his hairstyle after inhaling it’s fumes. And then of course fans will never forget Cell Block 69’s hair metal years when Corey, the artist formerly known as ‘Korey’ claimed to have been mauled by a siberian wolfhound whilst on Safari in Africa.

Corey Van Coverdale boasts “although traumatic, the 80’s have been kind to our beautiful faces and have provided us with the perfect inspiration to write an infinite number of obviously amazing songs. Sure, these songs were unfortunately stolen from us and made famous by other ‘artists’, but we’re back to reclaim them. Well, at least perform them as they should be – with the right amount of denim, leather, pvc, hairspray, fluorescence, and new improved Rock action.

Cell Block 69 are here to Rock you. Again. Don’t spend your endless summer nights in anguish – wishing you’d been at the festival of Corey. Just be there. You’ll also be treated to the maximatastic sounds of the extremely radtastic Rockers, Glitoris.

Tickets available through Moshtix, or Ticketek.

Tickets also available at the door if not sold out.

When: Sat 20th December
Where: ANU Bar and Stadium

NEWSFLASH FROM COREY: CANBERRY IS SOLD OUT !

Unfortunately there will be no tickets available at the door.

For those with tickets, we’ll see you tomorrow. For those that were hoping to get along, we’ll be sad not to see your awesome faces ;-(

After Glitoris and Cell Block 69 have Rocked, there will be an after party hosted by the magnificent Phoenix Bar.

MOSHTIX HAS NOW SOLD OUT !

Tix are now only available through Ticketek. You can get them online at the link here, or at a Ticketek outlet.

We’ll send a status out on the day but if you really want to see the show, you should buy tix asap thru ticketek as there will be no tix at the door if ticketek sells out. It’s Public Service payday in sweet Canberry today and tix are selling very fast.

Corey will miss you if you miss Corey. Isn’t it ironic. Don’t you think?

For those of you who’ve tried purchasing tickets over the counter and couldn’t, this problem has now been fixed. Sorry for any inconvenience.

bj_ACT - 20 minutes ago
That’s a really interesting read A nony mous. We deserve to know more research and analysis. Many of the Oaks and Cedars of... View
A Nonny Mouse - 4 hours ago
The Local Government Association of South Australia commissioned an 'Independent Inquiry into Management of Trees on Public L... View
bj_ACT - 5 hours ago
I’d certainly like to see some peer reviewed stats on the tree falls in Canberra. I noticed on radio last week the TCCS exe... View
News 10

@the_riotact @The_RiotACT
ACT Senior Australian of the Year and 50-year volunteer with @stjohnaustralia Valmai Dempsey wants mandatory #first-aid training for learner #drivers. She says it's a no-brainer https://t.co/Xovhw0Ec3H (53 minutes ago)