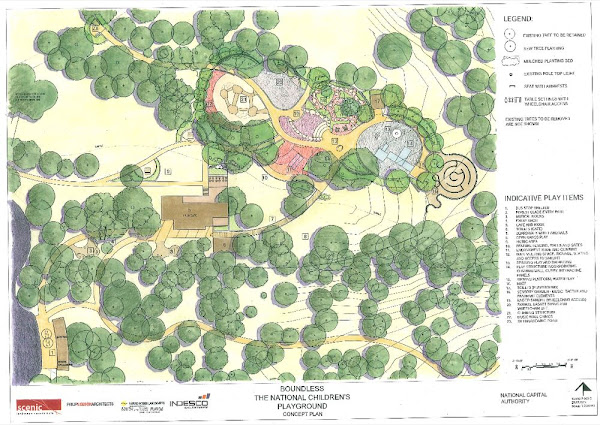 Today Chief Minister Katy Gallagher announced that $50,000 will be allocated to the construction of a Boundless National Children’s Playground as part of next year’s centenary celebrations.

The playground has been planned to be constructed in the National Triangle, near the Carillion, with the first stage hopefully being opened to the public in Children’s Week, October 2013.

“Once completed, this will be an exciting new space for children and young people where there are no barriers to play or inclusion,” the Chief Minister said.

“The Boundless playground will be a wonderful gift to Canberra in the Centenary year with a view to the first stage being opened during Children’s Week in October 2013,” the Chief Minister said.

The project will be community-driven from grass roots involvement in the design of the playground’s many elements through to a big fundraising effort to finance the playground via workplace giving amongst public servants employed by the Commonwealth and ACT Governments.

What children actually need are for the government to finally replace the tree houses at Weston Park.

Yes, that would be very helpful for children in wheelchairs or with cerebral palsy. Nothing PC about this, just a space where all families can take their children, regardless of ability. If you were a parent of a child with a disability, you may just appreciate the initiative.

So how much money is actually needed from public servants and what happens if that figure isn’t reached? Does ACT Gov cop it sweet for promising something it couldn’t afford? Or does the PS collective get blamed for not wanting to fork out?

I’ve seen these “inclusive” parks – they have one swing that’s built like a boat for the spases to ride, which eventually has padlocks put on it to stop the mental retard bogans from breaking it.
PC-idiocy at its finest.

What children actually need are for the government to finally replace the tree houses at Weston Park.

“Boundless”?? Only bounded by two major arterial roads and a body of water. And who will protect the trees…think of the trees!!!! [tongue in cheek smilie]

Nice a massive park between a water hazard and a two major roads and an overpass.

What age of teenagers are they planning to have at this park and how soon will they be developing to put skyrises next to the park to put it to good use!

$50K would probably cover the installation of the lawn watering system.

There will be no ‘tax’ on public servants but public servants (ACT and Commonwealth) will be asked to contribute through workplace giving schemes. This playground will be a great addition to our city in its centenary year and we are confident people will give generously.

Bob Jones - 6 hours ago
Deb Wheare And Lynne Meredith... I've heard because of the more right someone who identifys as being an Aboriginal or Torres... View
Kev Martin - 16 hours ago
I find If you stop breaking the law, you don't get locked up View
Deb Wheare - 1 day ago
Jacob Torresan face palm View
Property 14

Pari Gilmour - 17 hours ago
I support a burnout pad. Zero interest myself but obviously these guys need a social space to do their thing. Happy to suppor... View
Opinion 33

@The_RiotACT @The_RiotACT
The victim of an attempted robbery at Belconnen says her impression of the city has changed forever after a thief tried to steal her bag https://t.co/3SlXYFKuaL (22 minutes ago)

@The_RiotACT @The_RiotACT
For the fourth year in a row, the Toyota Corolla has taken out first place in the top ten vehicles bought in Canberra. Did your car make the list? https://t.co/rsV9yLItXn (3 hours ago)