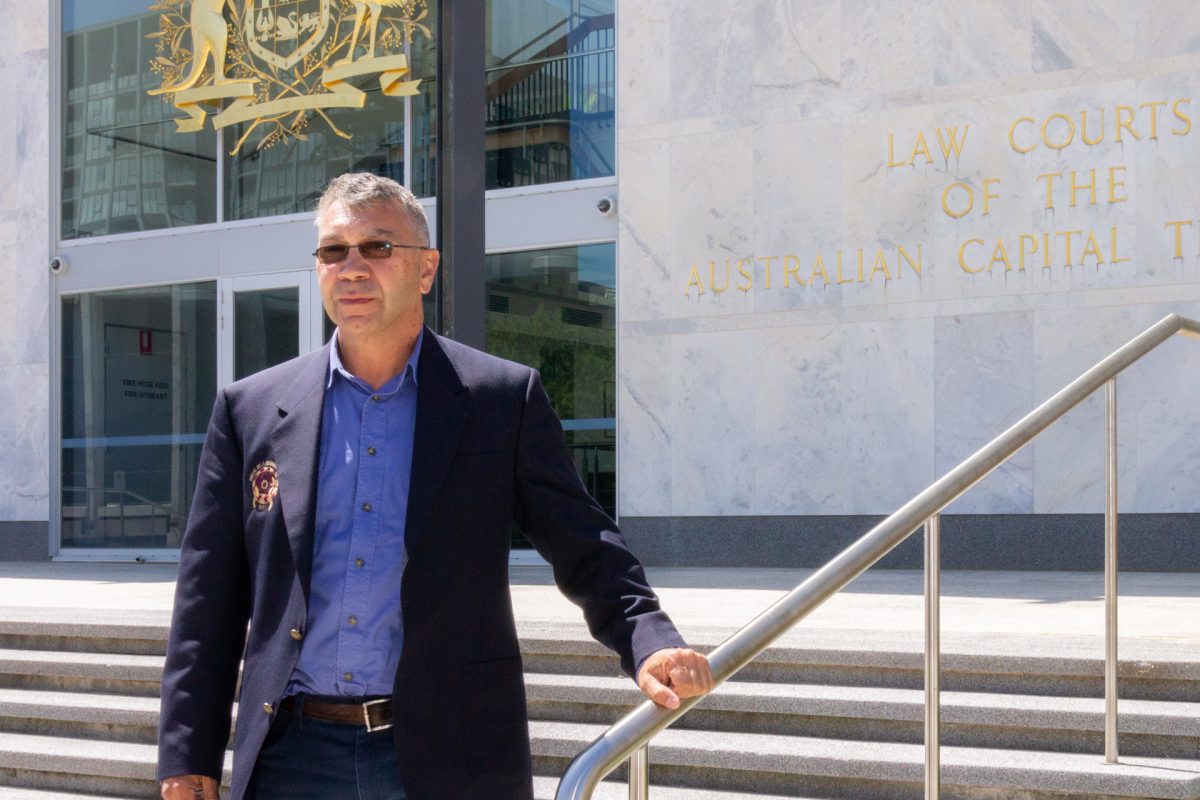 Paul Girrawah House said his case in the Supreme Court is about giving “respect and honour to all people”. Photo: Albert McKnight.

A legal challenge seeking to overturn an ACT Government policy that claims the Ngunnawal people are the only traditional owners in the Territory has been mentioned in court before a hearing next year.

“This case is about giving respect and honour to all people in all parts of the country,” Ngambri and Ngunnawal custodian Paul Girrawah House said outside the ACT Supreme Court on Friday (4 November).

Introduced in 2002, what has been called the “one tribe” policy involves the government recognising the Ngunnawal people as the sole traditional owners in the ACT.

Barrister Brodie Buckland, representing the Houses, said their case was not about supplanting the Ngunnawal but about getting rid of a policy that was inconsistent with the historical record and cultural truths.

He told the court on Friday that this case was about the human rights of the Ngambri people and the picture was much more complex than the “one tribe” policy would have the public believe.

He argued the government policy infringed on his clients’ rights and that the government should not be able to dictate who is and isn’t a traditional owner.

“This is something that should be determined by cultural truths,” Mr Buckland said.

Lawyer Annie Arnott represented the United Ngunnawal Elders Council in court and said her clients wanted to apply to join the legal proceedings.

When discussing the application, Chief Justice Lucy McCallum said she was concerned that if one voice were excluded, the court’s decision would not have the integrity needed to resolve the issue.

READ ALSO What are the next steps for a native title claim in the ACT?

She said for the Houses to bring their cause to a colonial-established court required lateral thinking and part of that was how she would do her best to make it an inclusive process.

The challenge will return to court on 18 November to determine whether or not the Ngunnawal council will join the matter and a five-day hearing of the case has been listed for May 2023.

I’m not a First Nations person but I have long understood that the Ngambri people are also present in the Canberra region, and should be equally represented.

I don’t think any group be given these acknowledgements of country on a regular basis. Only special occasions, a few times a year. Don’t the proponents of this realise that most of us are quietly groaning and looking at a neutral spot on the ceiling when it happens? And they clearly don’t know who we should be acknowledging anyway.

The whole thing is out of control and has become a sacerdotal ritual, filling some sort of spiritual void for our administrative elites in between their attendances at the Garma festival.

What’s really sad about this issue is that we simply don’t know – no-one ever asked the local Aboriginals much about themselves back in the day. The courts have already ruled there isn’t enough evidence to say whether they were Ngambri or Ngunnawal or something else. The historical record is mute on who the traditional owners and their cultural truths were. No amount of law suits can fill the gaping, tragic hole in Canberra history.

It seems as though these people will never be satisfied. They want their own “voice” in Parliament but they can’t even decide who lives where. And that is only the Canberra region. What about the other 500 tribes/mobs and their white/black hangers-on, how are they ever going to agree on anything?

Trevor, mate, had Japan succeeded in invading Australia in the 1940s, as Britain did each side of 1800, do you think anyone would now remember where your forebears lived? Or that any descendants of those living here then would ever be “satisfied”? If you are on the side of Ukrainians, surely you can feel something besides contempt for the original Australians?

What a ridiculous world this is.