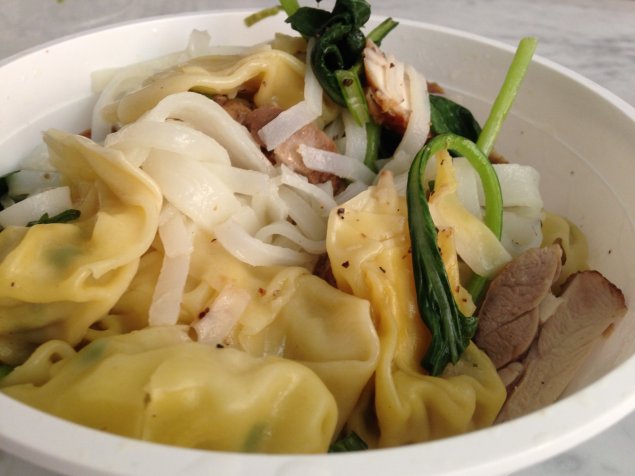 With the weather well and truly not getting any warmer, sometimes all we need is a big warm bowl of something to get us through the day. This week I investigated a cheap eats winter warmer at Saigon Foodies in Kingston.

I’d been to Saigon Foodies a few times before for banh mi so I was excited to visit again. On the menu are two types of pho – beef or chicken, as well as banh mi, rice paper rolls and vermicelli salads. I opted for the chicken pho for $12, and was given the option of adding dumplings for an extra $3. Seriously, as if I could say no to dumplings!

The pho was prepared quickly, probably in less than three or four minutes and packaged into a takeaway bowl for me. When I opened it up, I was expecting something a little more… soupy, I guess. There was pretty much no liquid inside it, just noodles, dumplings, chicken, and some green vegetables. 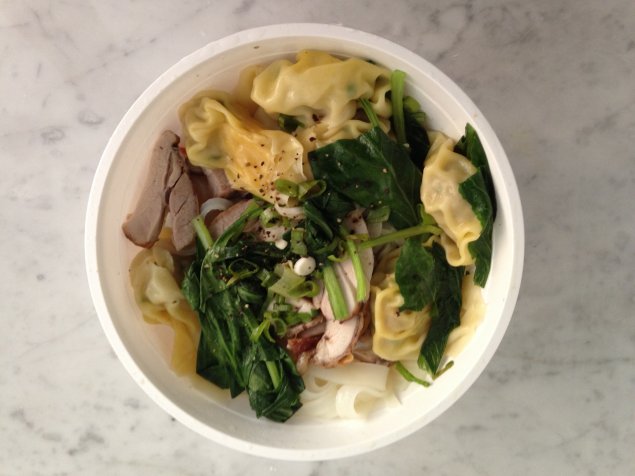 I hate to say this, but I wasn’t that impressed. The dumplings had a thick and chewy wrapper, the noodles were overcooked, and I found about four or five bones in it. I know that pho is usually made with bones in the broth, however these bones were stuck to the actual pieces of chicken and couldn’t have been used in the broth.

This week’s cheap eats was sadly (and for the first time!) a bit of a fail. While the pho was not my thing, I can absolutely vouch for the banh mi at Saigon Foodies. It’s consistently delicious and I wish I had ordered it for lunch instead.

I miss the guy who ran the café before Saigon Foodies went in. He did an awesome pho and banh mi, and it was only around $7.50. I’ve tried this new place, I can’t say I was impressed. It’s too expensive for what it is.

Choices in Manuka is a better option for Pho. I had a great sticky rice with chicken and sweetcorn at Saigon Foodies yesterday though.

I do spread the love between Saigon foodies for bahn mi and rice paper rolls and choices for pho or bun bo xao.

Saigon Foodies makes (in my opinion) the best rice paper rolls in Canberra, and I’m a big fan of its banh mi too. Never tried the pho, but I know people whose immune systems swear by it.

Alexandra, did they perhaps forget to give you broth?? This is what the pho is supposed to look like: http://foodpornjournal.com/wp-content/uploads/2014/10/Saigon-Foodies-Kingston-beef-pho.jpg

George Watling - 4 minutes ago
Marc Edwards Spot on Marc. The best way to deal with congestion is decentralize workplaces. If everyone is travelling to a ce... View
Community 8

Mazzie Woodward - 2 hours ago
Thanks James Milligan MLA and Leanne Castley MLA for all your advocacy on this issue - keep up the pressure as I’m sure thi... View
Opinion 5

Linda Stapleton - 8 hours ago
Just look at the size of that Rhubarb...wow View
show more show less
*Results are based on activity within last 7 days