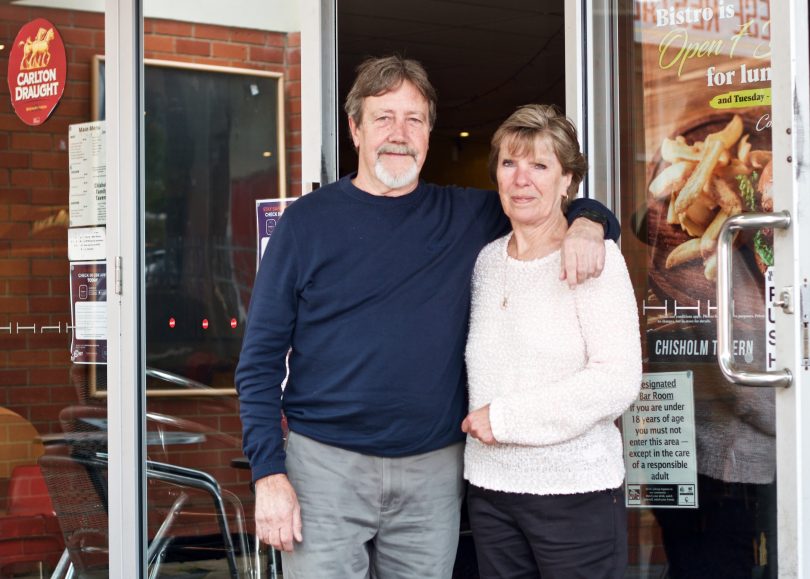 Chisholm Tavern owners Graham and Jennifer Hunt will bid their final farewell to the venue in May. Photos: Michael Weaver.

The future of the Chisholm Tavern has been sealed – it will close its doors in May after the developer of the site chose not to renew the venue’s lease.

The developer also confirmed it will take legal action in the Supreme Court over the sale of a toilet block required for a proposed McDonald’s restaurant to be built on the site of the Tavern.

The many moving parts of this story took another turn this week when Chisholm Tavern owners Jennifer and Graham Hunt received a letter from the owners of the Chisholm Village Shopping Centre notifying them that their month-to-month lease would not be renewed.

The owner of the centre, Chisholm Village Pty Ltd, had made repeated efforts since July 2019 to have a development application approved by the ACT Government to build a McDonald’s restaurant on the site.

The first two DAs were knocked back before the decision was challenged in the ACT Civil and Administrative Tribunal (ACAT) in February this year. ACAT gave approval for the McDonald’s proposal on the condition the ACT Government sell a toilet block adjacent to the Chisholm Tavern.

A petition to save the Tavern received tri-partisan support from three MLAs and Planning Minister Mick Gentleman announced the toilet block would not be sold meaning the Chisholm Tavern lived to serve another schooner and schnitzel.

However, the Tavern’s fate was sealed in a letter terminating their lease, which read, “We have made a decision with a high-quality tenant to occupy block 48 following relevant authority approvals”.

The owner’s representative told Region Media they have sought legal advice to challenge the ACT Government’s decision on the toilet block.

When asked if they still planned to put a McDonald’s restaurant on the site, the owner, who did not want to be named, confirmed those plans.

“Absolutely, yes,” he said. “We’ve got legal advice and have commenced that process.”

It is understood the matter will be heard in the ACT Supreme Court.

The shopping centre owner said he appreciated the community’s support for the Tavern, but their plans did not fit with what he called the “retail ecosystem and family-friendly objectives” of the shopping centre.

“We’ve always taken a long-term view of how we plan for the shopping centre by creating a commercially sustainable and family-friendly and convenient environment for our customers. We’re working to introduce new tenants who don’t exist in Chisholm,” he said. 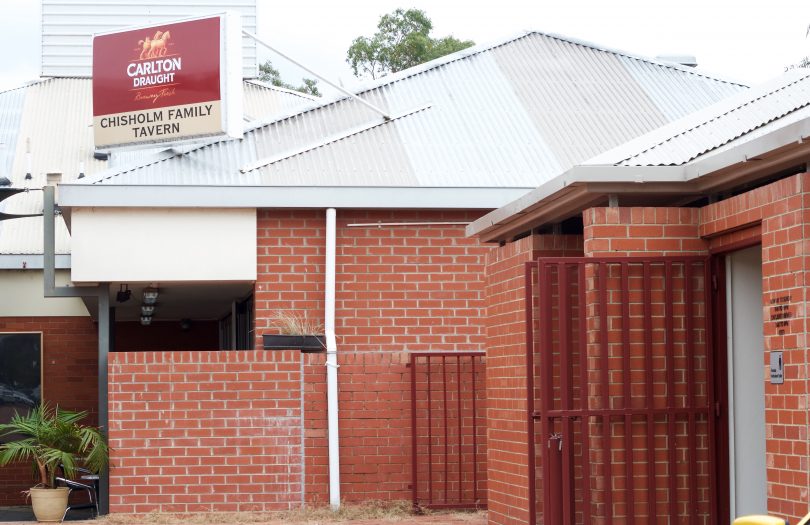 The public toilet block adjacent to the Chisholm Tavern is at the centre of plans for a McDonald’s restaurant on the site.

Tavern owner Jennifer Hunt said they had been offered a second lease on the vacant Chinese restaurant next to the Tavern but the terms of the lease were unsuitable. They were also considering options to lease other premises but no decision has been made.

Ms Hunt said she and all of the Tavern’s loyal customers were deeply saddened with the impending closure as the venue represents the heart and soul of the Chisholm community.

“People come here because they want a beer and a good feed, and this decision is just a great pity after all these years,” Ms Hunt said.

“We’ve met some fantastic and very interesting people during our time here and made lasting friendships we hope will continue beyond the closure of the Tavern.

“We’ve seen marriage proposals, some impromptu, some planned. We’ve had marriages, engagements, wakes and all the milestone parties that you can imagine, including an 80th birthday which was the best party of all.”

The manager of Chisholm Village said the Minister for Planning and Land Management, Mick Gentleman, refused to meet to discuss the proposal and is yet to provide a reason for the decision. A spokesperson for Mr Gentleman said they had responded to correspondence from Chisholm Village Pty Ltd.

After operating the venue since 1991, the Hunts will call last drinks on 3 May this year. A farewell party is already planned followed by an extended holiday.

I always loved you guys,you supported me through some tough times in my life,I will never forget.

This is so sad. Why can't they just leave the Tav alone. Here to help where ever possible.

Something to remember when you feel like a burger. Buy it elsewhere.

This is going to put pressure on the other food joints nearby. Pressure on parents as well to say "no" to their little kids' begging for junk food.

So sorry to hear this. Wishing Jen and Gumby all the best for the future. Thanks for the memories.

What did people think the outcome would be here? The people who own the building were just going to keep a tenant they no longer wanted there?

This was a foregone conclusion as soon as the owners decided they wanted to put a maccas there. The tavern have wasted their own time and money fighting it. They are tenants renting a space that the owners want to re-purpose. The tavern might as well have just set money on fire rather than fight it.

Forget it Jake. It's Barrtown.

We don’t really need another McDonalds in the Tuggeranong region, do we?

So lose money to lose money to let in something nobody wants...and when in the end they are going to lose more money on the space that they aren't losing out on at the moment...typical no brained reasoning there, business decisions gone completely mad with those developers...seems like the government is going to really give them some curry here and keep saying no

They want a "quality tenant". Quality means consistency so I suppose low quality is still quality.

I hope the local MLAs are reading this…and the Tuggeranong Community Council is paying attention. The locals DON’T want a Maccas. Shopping Centre owners are you listing or only intetested in polluting the local area with more traffic, garbage and noise?

The owners are simply doing what all businesses do, trying to make money.

And whilst you may claim that the locals don’t want a McDonald’s, everyone knows that it would be a profitable business on the site, which is exactly why they want to build it there.

Yeah, Tuggeranong is really crying out for another McDonalds, NOT! We already have them at Erindale, the Tuggeranong Town Centre and Condor, we don’t need another one! Money wins in the end. I am sick of the sight of the yellow arches everywhere you go!

Ricky Paine will be a sad day!

If Maccas ends up there don’t ever buy from it. No $ = no business.

Am I correct in assuming this developer wants to take the ACT Government to court to force it to sell one of our opublic assets in order to let a foreign company to set up on the site?

HiddenDragon - 3 hours ago
Why stop with repatriation flights? The logical conclusion to the economies of scale argument (which is equally relevant to j... View
Capital Retro - 6 hours ago
Forget the "the significant costs and operational requirements associated with the program." being the reasons. The risk is u... View
ChrisinTurner - 7 hours ago
It is amazing how the number wishing to return home has remained constant despite over 100,000 returns. View
Sport 4

Gassed - 7 hours ago
Shame I thought they were going to sell actual chilli's not just sauces... View
Brisal - 12 hours ago
I can't wait to check out the new store! View
Food & Wine 50

@The_RiotACT @The_RiotACT
Supergroup debuts, homegrown talent and indie punk - check out the #GigGuide for what's in store! https://t.co/2G4Dlxv24m (19 minutes ago)