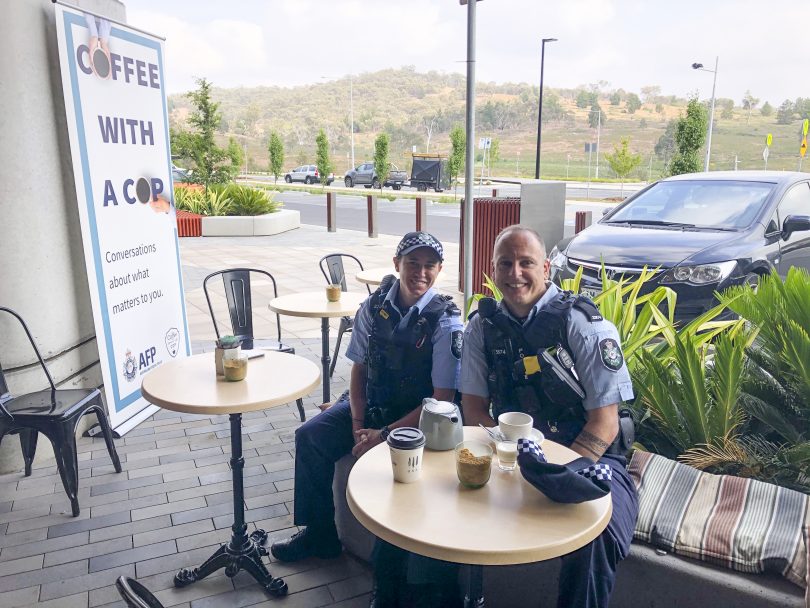 Members of the public were invited down to a cafe in Molonglo to have a chat with a cop over a cuppa. Photo: Dominic Giannini.

ACT Policing is encouraging the public to get to know their local police officers after offering Molonglo Valley residents the opportunity to enjoy breakfast and coffee with a cop.

The Coffee with a Cop initiative saw members from the Woden Police Station and ACT Policing’s Community Safety team come together at a local cafe for officers to not only answer questions about policing but to also enjoy a general chat with the community.

Engaging with the community was a great way to build confidence in local police forces said the Officer in Charge of Woden Police Station, Detective Acting Station Sergeant Simon Coady.

“Coffee with a Cop enables police to engage with the public in a stress-free environment in order to build trust and help break down potential barriers in communication,” Sergeant Coady said.

“As a new and rapidly expanding area of Canberra, Molonglo presents unique challenges and we wanted to engage directly with the people of the Molonglo Valley about potential issues facing the community.”

An officer at the event said it was important that members of the public remember the police are just like everyone else, and they should not be afraid to approach officers in the street.

“Police officers are just normal people too, we are happy to have a chat and engage with people who come up to us.”

Friday morning’s (December 13) catch-up was the second time ACT Policing has engaged with the public over coffee, following a successful event in Lyneham back in August.

This time the program was held at Morning Dew café at the Denman Village shops.

“I would like to thank Morning Dew for supporting ACT Policing with this important and worthwhile initiative,” Sergeant Coady said.

Police say that the Coffee with a Cop program will be extended in 2020 as they hope to hold around four or five events next year across all patrol zones in Canberra.

William Coats - 20 minutes ago
The land tax was to stop people “land banking” houses should be used as homes not stagnant investments View
Lea Powell - 6 hours ago
William Coats it takes time to change policy directions. It’s not as simple as a click of the fingers. View
Lea Powell - 6 hours ago
Kerry-anne Stafford appeal the decision. Why have they revoked it. Don’t take that lying down. View
News 5