Come on in, the water's icy - two break the ice on extreme swim record 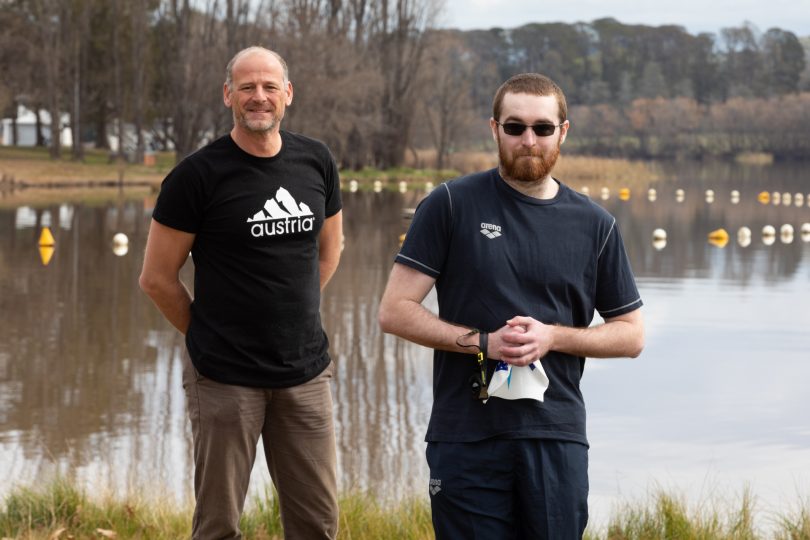 The term breaking the ice has new meaning for two Canberra swimmers Joseph Pascall and Michael Pranckl who last weekend became the first people in Australia to complete an extreme ice mile – swimming at least 1.6 km in water that is literally frozen.

The specialist ‘freeze-stylers’ completed the feat at Thredbo’s snow pond last weekend which has now been officially recognised by the International Ice Swimming Association.

Swimmers can only wear a standard swimming costume, a cap and goggles – no wetsuits or any other aids are permitted, although some extreme measures are taken to ensure the safety of those attempting to join the elite frozen club of ice milers. 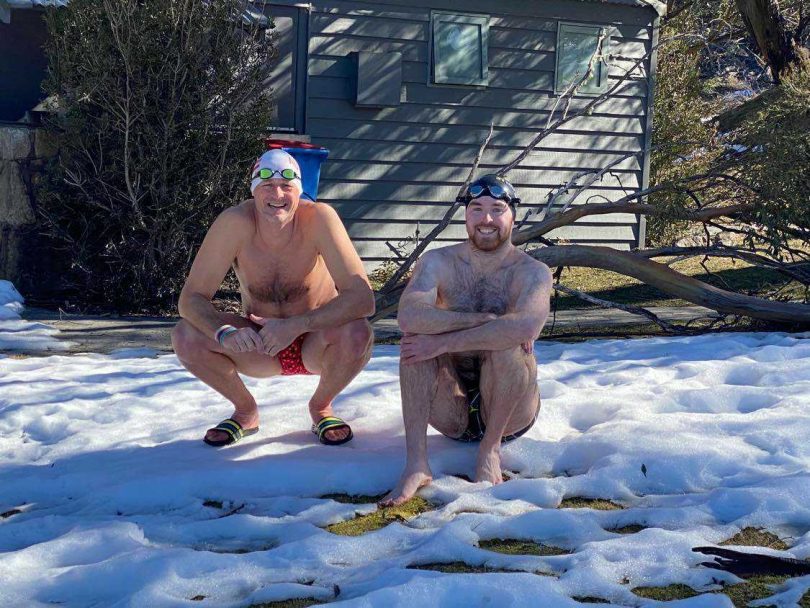 Michael Pranckl and Joseph Pascall before their icy swim at Thredbo. Photo: Supplied.

When Joseph, 19, and his support team cracked the ice covering the snow pond at Thredbo last weekend, their thermometer read 1.9 degrees. But the last thing on his mind was the cold and obvious risk of immediate shock from hypothermia.

“I prepare myself by listening to music, and one song in particular – The Bay of Suvla by the Dreadnoughts,” the quietly spoken Joseph tells Region Media.

The song is a shanty about an amphibious landing made at Suvla off the Gallipoli peninsula as part of the final British attempt to break the deadlock of the Battle of Gallipoli on the night of 6 August 1915.

Joseph recites the lyrics: “Plucked from the finest of hamlets and dales, from Sydney and Bristol and Yorkshire we hail. Riding the finest of summertime gales, we’re bound for the Bay of Suvla.” 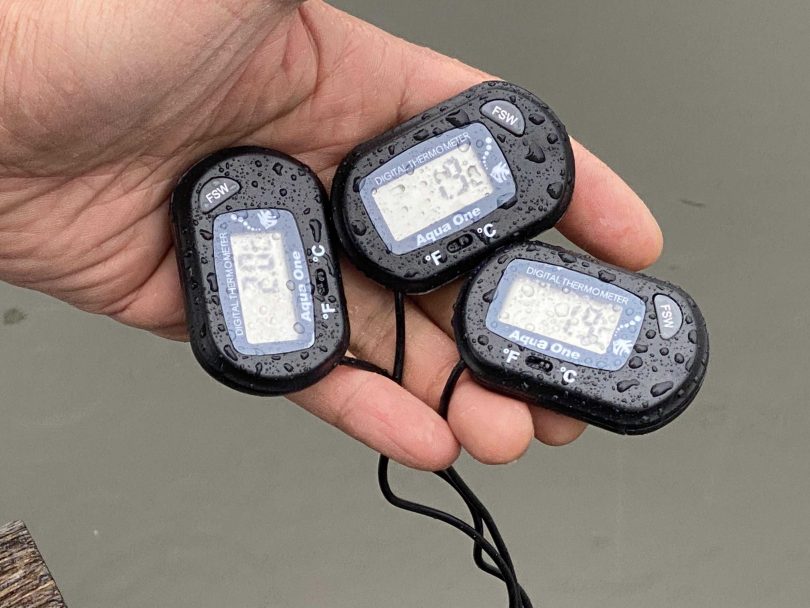 Austrian-born cool-water comrade, Michael, 46, also swam an extreme ice mile, but the water had risen above two degrees, meaning he had to swim two kilometres to meet the criteria set by the International Ice Swimming Association.

The ice mile escapade has become a new favourite pastime for the two swimmers who warmed to swimming in Lake Burley Griffin since their local pools were closed earlier this year. Temperatures in the lake are usually about 8-9 degrees, so Michael suggested the pair attempt an ice mile, which they achieved at the end of June.

The video below shows Joseph training in Lake Burley Griffin.

Both Michael and Joseph are well aware of how cold water affects their bodies and say the greater respect goes to their support team, including an observer (Michael’s partner Miriam) who paddles alongside in a kayak (their ice-breaker) and a qualified paramedic on site.

The paramedic who monitored the pair after their swim said it took them more than 45 minutes for their body temperatures to return above 35 degrees Celsius (which is the medical classification of hypothermia).

“It’s hard to explain the feeling when you come out of the water when nobody was expecting we could do it,” says Michael. “The satisfaction you cannot imagine.” 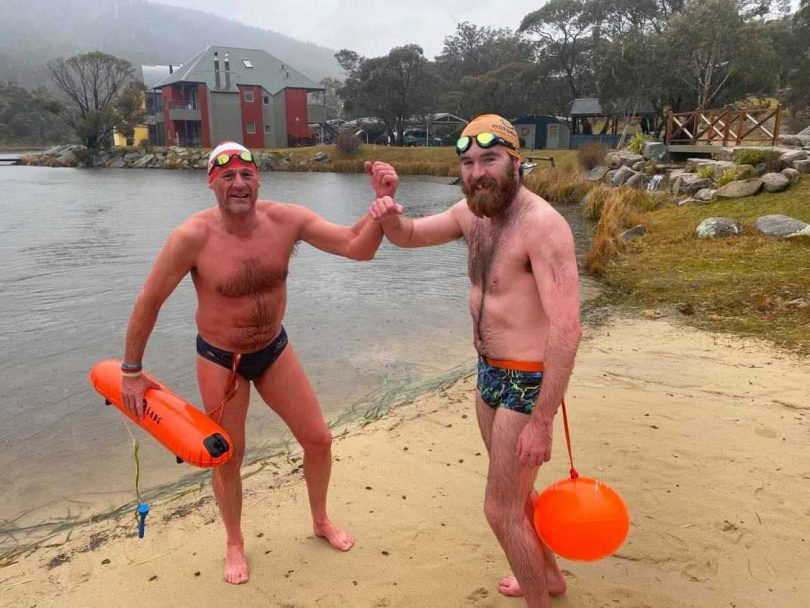 Michael and Joseph after their extreme ice mile at Thredbo. Photo: Supplied.

This story is also made all the more remarkable as Joseph has overcome an operation by renowned brain surgeon Dr Charlie Teo, who removed a cyst on Joseph’s pineal gland when he was 15. Joseph also developed Crohn’s Disease, an inflammatory bowel disease, in the years after.

Having swum since he was eight years old, Joseph says he is able to cope with the extreme cold by simply blocking it out.

“I’ve never really felt that tightness sensation of the cold water, but it’s definitely something I keep in mind. I just keep breathing and just keep swimming,” says Joseph.

“A lot of things had to happen for these two to get to that point where we could do the swim,” says Steve.

“They’ve swum in Lake Burley Griffin when it’s been pouring rain. You’ve got to be mentally tough to be able to even think about doing it. But they embraced and they wanted to achieve it. It’s a pretty huge effort.” 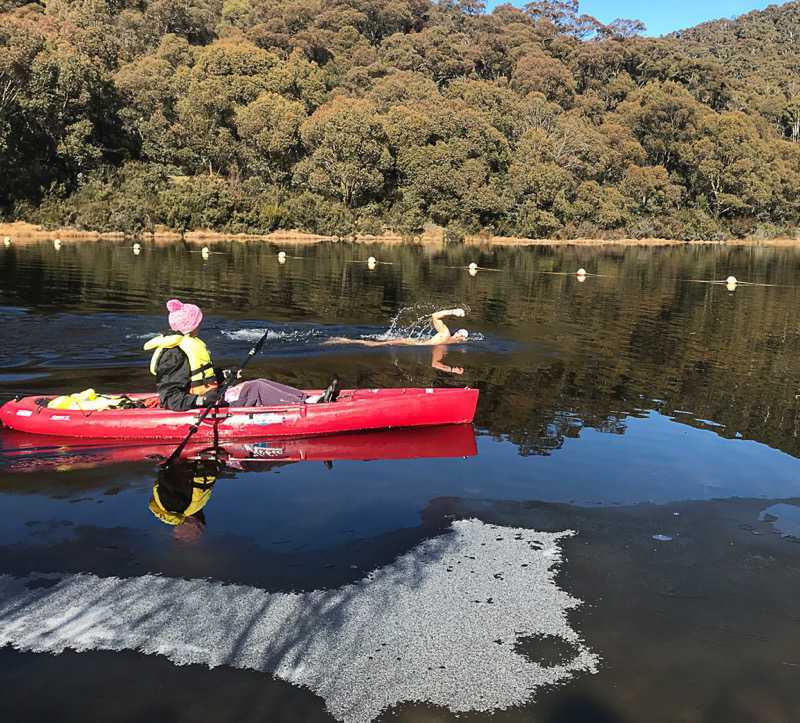 Is this what you have on your to do list Deb?