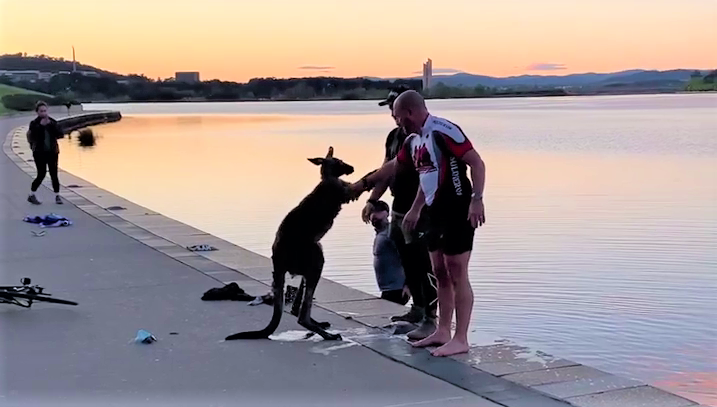 Unfortunately, the kangaroo that passers-by rescued had to be euthanised. Photo: David Boyd.

It was the story that captured Canberra and the world’s hearts after a video went viral of two men pulling a kangaroo out of a freezing Lake Burley Griffin on a frosty morning.

Unfortunately, despite the rescuers’ valiant efforts, the kangaroo in question had to be euthanised by an ACT Government veterinarian after ACT Parks and Conservation Service assessed the animal.

Yesterday, the Canberra community expressed frustration with this information being made public, and many asked why rehabilitation was not an option.

Some local news outlets limited commenting on their social media posts, possibly fearing a negative reaction from the community.

According to both an ACT Government spokesperson and ACT Wildlife president Lindy Butcher, the kangaroo likely suffered from a common condition called ‘capture myopathy’, or muscle damage resulting from extreme exertion or stress.

“While the animal may be otherwise well, it’s the stress effect of being captured and the cascade of chemicals this causes in their system that leads to their death,” she explained.

However, Lindy wanted to reassure the rescuers that they did the right thing by getting the animal out of the water.

“It’s nobody’s fault. The capture myopathy is a known condition in kangaroos,” she said.

While Lindy isn’t across this specific situation, she says it’s her understanding that the diagnosis and treatment of this condition is complex, and keeping the animal in care for prolonged periods, as would be required, is not good for the roo.

“No wild animal does well in captivity, so it can be a vicious circle,” she said.

“In this case, I think everyone did exactly what they could.”

The ACT Government spokesperson said that “several factors contributed to the welfare concerns for this kangaroo, including the poor symptoms the animal was showing, the location where the animal was found, and the cold, windy weather”.

According to the Bureau of Meteorology, when the roo entered the lake, the temperature was only 1.5 degrees, with an apparent temperature of as low as -6 degrees.

The ACT Government, through Access Canberra, should be contacted in the case of an injured kangaroo.

READ ALSO Horse paddocks, golf courses, reserves – green spaces are about more than the land they use

ACT Wildlife don’t look after kangaroos, but they do see the occasional wallaby coming into care, Lindy explained.

This summer, Lindy says community members who see an animal in distress can call the ACT Wildlife 24 hour phone line for advice.

The government recommends community members don’t attempt an animal rescue due to safety concerns for both the animal and the public.

Instead, members of the public should give the animal enough space to leave the area if they wish to do so and observe them from a distance.

ACT Government rangers initially responded to a call-out on the morning of Tuesday, 21 September, after the animal had to be pulled out of the lake three times at around 5:30 am.

At the time, one half of the rescue duo, Alex Mitchell, told Region Media he believed the rangers were going to release the kangaroo somewhere away from the lake.

Unfortunately, after the kangaroo had been examined, the vet held significant concerns for the kangaroo’s welfare, and this was no longer a viable option.