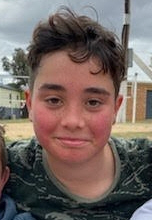 Have you seen Jay West, who has been missing since Monday? Photo: Supplied.

ACT Policing is seeking the public’s assistance to locate 12-year-old Jay West, who has not been seen or heard from since Monday (11 November). Jay was last seen in Harrison.

“He is described as being of caucasian appearance, about 130 cm (4’ 5”) tall and of medium build. His face has freckles. He was wearing a blue and red polo shirt and blue shorts,” the spokesperson said.

“Police and Jay’s family hold concerns for his welfare and are requesting the public’s assistance in locating him.”

Anyone who may have any information that could assist police in locating Jay is urged to contact ACT Policing Operations on 131 444.

Capital Retro - 11 hours ago
One comment on this thread was the Australian Electric Vehicle Associate has given advice to the ACT govt. on its policy that... View
Heavs - 14 hours ago
Five superfluous words in that last sentence. View
JC - 15 hours ago
What policy? Always trying to make a political point. What’s clear is you don’t know much about electronics and electrica... View
News 1

russianafroman - 13 hours ago
Terribly underfunded. Around Gungahlin it's hip height. There should be double or triple the amount of mowers. It's not justi... View
News 33

Michael Hourigan - 21 hours ago
Except that it doesn't Joe View
Lloyd Woodward - 1 day ago
Stop with this boomer thing. Im apparently a Boomer, but think this is a great idea. He is just a sad Panda.... View
News 1

awc73 - 23 hours ago
Imagine if the ACT government could provide 24/7 public access AEDs to all residents and visitors. No need to bang on the doo... View
Property 8

Nick Sifniotis - 23 hours ago
I want this View
News 15

Spencer Hunter - 1 day ago
Matt Wecker boys could be on here View
Sarah Watt - 1 day ago
Anthony Billy Watt I’m sure you’re across this... View
Larissa Hutchens - 2 days ago
Marshall Amelia they definitely would. Tim could take them 😝 View
News 21

Sue Jameson - 2 days ago
That’s a job!!! View
show more show less
*Results are based on activity within last 7 days

A few years ago, a couple in my social circle split up. They had been together for years, becoming a...
Property 38

ACT Policing has a blunt warning for e-scooter users: be an idiot and you will face the consequences. With e-scooters...
Opinion 31

@The_RiotACT @The_RiotACT
A dedicated team of volunteers is restoring the tranquil garden at Riversdale homestead in Goulburn to its former glory https://t.co/EupunFCBTe (1 hour ago)

@The_RiotACT @The_RiotACT
Miss the music: the @CBR_Symphony will be back in 2021 with a new team, old favourites and fresh Australian works. Check out the program https://t.co/rdarOqWtAd (11 hours ago)

@The_RiotACT @The_RiotACT
Art deco elegance and century-old charm are back in Kingston with the opening of Queenies Bar and Good Times https://t.co/svCAn3flWd (13 hours ago)