Cool off at Forty Foot Falls 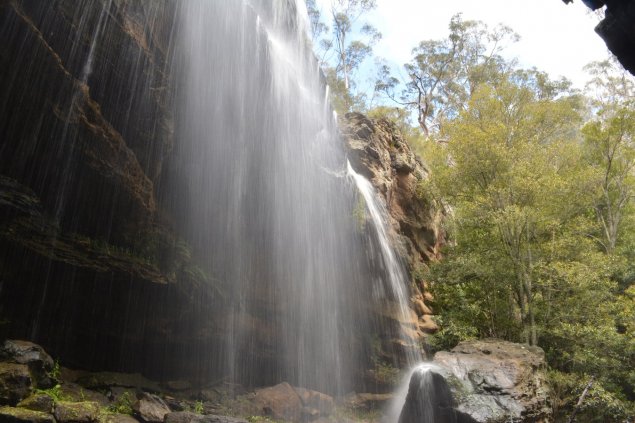 If you’re looking for a secluded place to cool off this summer only a couple of hours from Canberra, then the Forty Foot Falls are worth a look.

Forty Foot Falls is located just outside Mittagong, less than two hours from Canberra on the Hume Highway heading to Sydney.

The walk to the Forty Foot Falls is from the Boxvale Tramway Trail carpark, located on Boxvale Road in Welby. Head down the Hume Highway and in about an hour and 45 minutes, you’re there. Take the Mittagong exit, but turn left and then it’s a quick right hand turn onto Boxvale Road.

The trail onto Forty Foot Falls takes you through rock cuttings built for a railway transporting coal.

It’s a fairly easy trek to the Forty Foot Falls, at least on the way down. It’s less than an hour to the falls and around 3km. The red trail markers are a bit ambiguous in parts so best to take a photo of the map at the start of the trail before you start to make sure you’re heading in the right direction.

Once you’re one kilometre out from the falls, you see a sign marking the distance and then it’s mostly steps all the way. It’s steep going back up but it’s not far.

The last couple of metres will take you down a ladder, and over a few rocks and then it’s a great lookout from behind the falls.

You can walk around the back of the falls and stand under them. On the far right of the falls, there’s a great view, but watch out for the slippery rocks. Also keep an eye out for leeches. 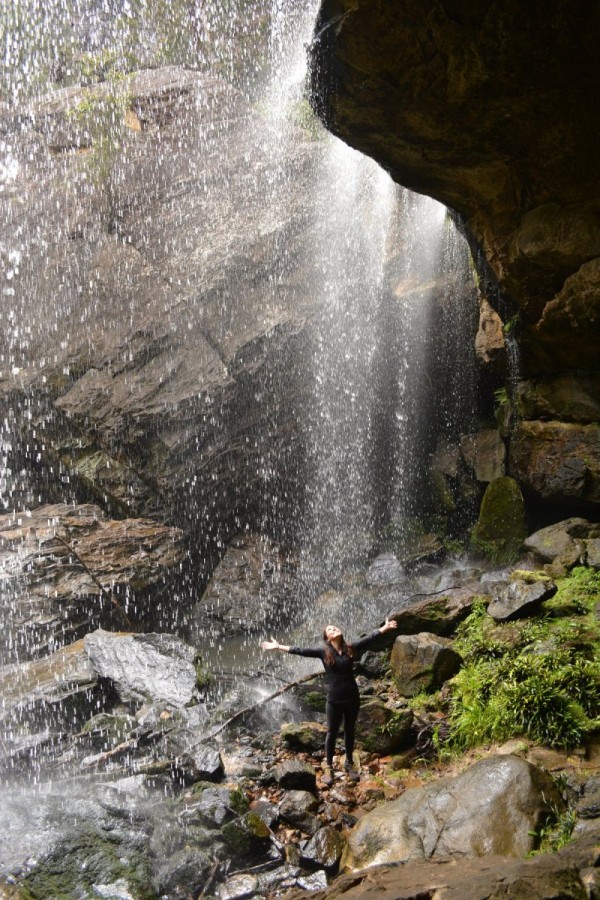 You can also get a good view of the falls from the front and up above, if you’re able to climb up and over a few rocks and navigate your way through the stinging nettles. In front of the falls are also a few waterholes that will be great for a dip when it’s warm. 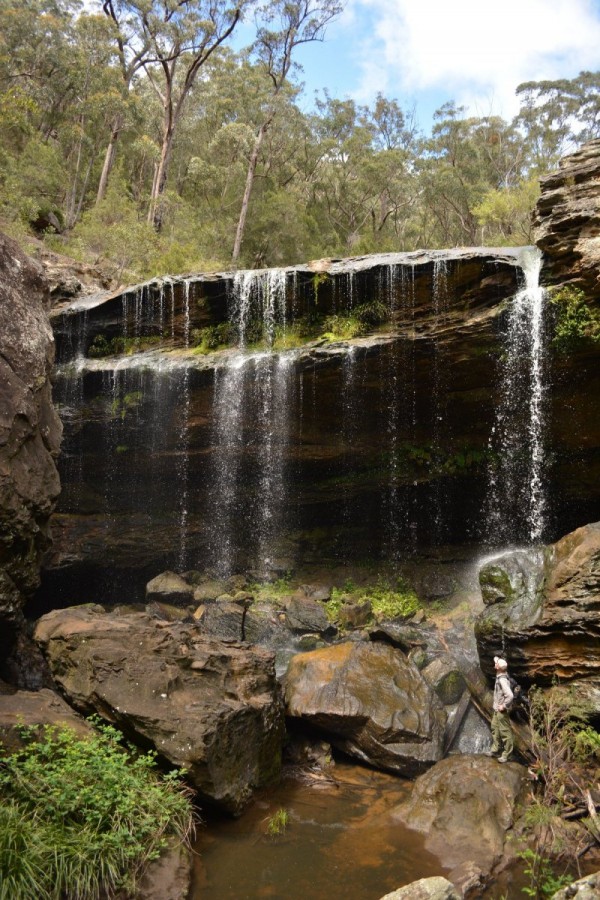 From here you can continue across the Nattai River and take the trail to Mittagong and Sixty Foot Falls, or there’s a loop walk that will take you around to the old tramway tunnel – but if you do the loop walk you’ll need to go up a steep incline that used to be a cable tramway.

We decided to walk back the way we came down, returning up the stairs until you reach the sign pointing the way down the Boxvale Tramway Trail. Without the detour to the falls, this trail is 8.8km return and will take you around two hours. 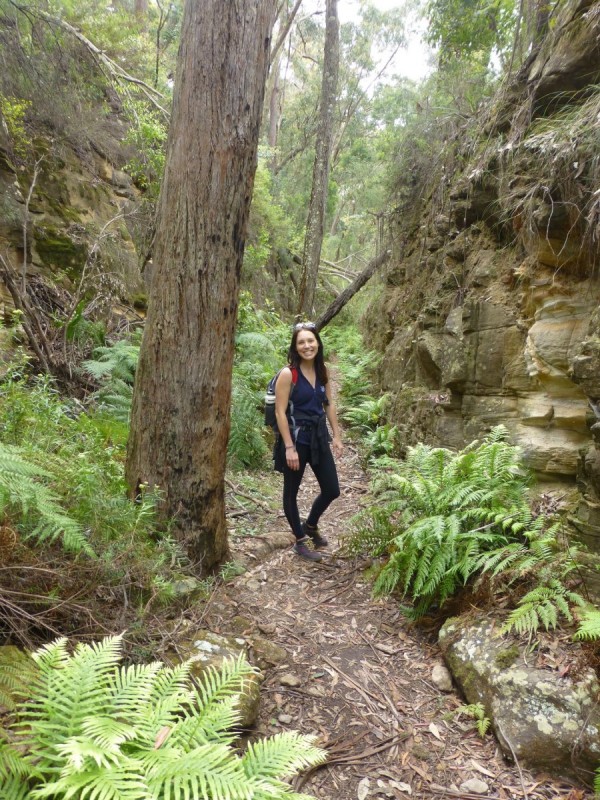 The tramway trail is a good walk through a series of cuttings made through the rock for a rail tunnel. The railway became operational in 1888 to haul coal extracted from the Nattai River Gorge to the Great Southern Railway at Mittagong. 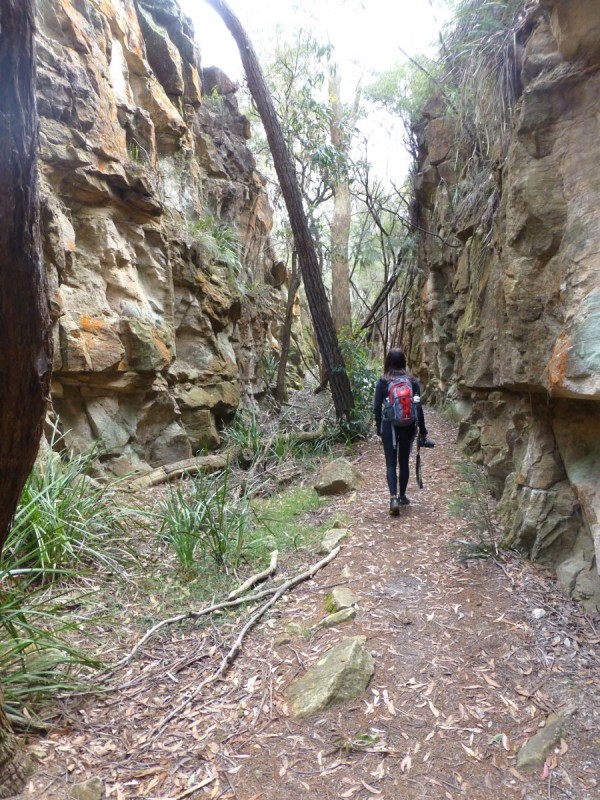 Coal extraction finished in the area in 1896. Bush grew over the railway and bushfires destroyed the railway trestle bridges. The Boxvale Tramway Trail was opened in 1986.

The highlight of this section of the walk is the 100 metre railway tunnel carved into the rock. You might want a torch to walk through as the ground is uneven from the sleepers that once lay there. Not far from the tunnel is a lookout over the gorge and the end of the walk. 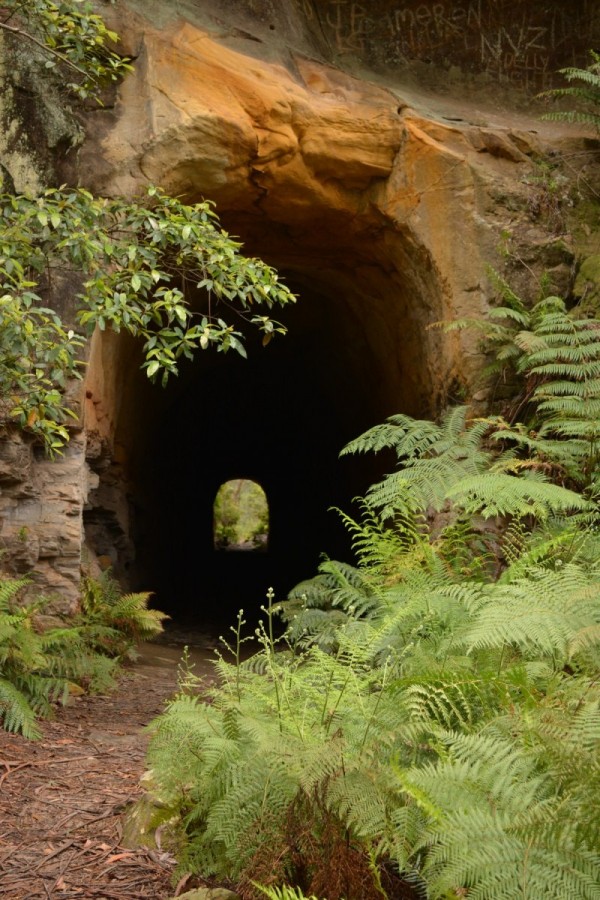 I’ve read about this walk before but never been. Your review and photos inspire me to put in on my to do list.

Really enjoying this series! I am going to add this walk to the list.

I am loving your bush excursion reviews especially the ones I didn’t know existed.
Please keep them coming.
Pics are perfect too.

I concur with the above. I hardly ever have time to go anywhere that’s not within 20 mins of my house but I might take a day trip over Christmas!

I am loving your bush excursion reviews especially the ones I didn’t know existed.
Please keep them coming.
Pics are perfect too.

Really enjoying this series! I am going to add this walk to the list.

Nada Krstin - 1 hour ago
oops, meant to say, cannot have it one way! :)... View
Nada Krstin - 1 hour ago
No. And if you think they are mature enough to vote at 16 or 17, then they should be tried for any crimes as adults as well,... View
Selene Sharp - 2 hours ago
I’m more concerned about whether it benefits society rather than just me View
Business 15

Mazzie Woodward - 2 hours ago
Thanks James Milligan MLA and Leanne Castley MLA for all your advocacy on this issue - keep up the pressure as I’m sure thi... View
ChrisinTurner - 7 hours ago
1500 sq m is enough for an ALDI. View
Opinion 5

Mark Parton MLA - 2 hours ago
Thanks for constructively engaging, but I would reject the characterization of my advocacy for Alex as a media stunt. And I w... View
Mark Parton MLA - 7 hours ago
All I’m doing, is trying to help as many people as I can, as best I can and I make no apologies for doing it. Everything I... View
News 10

@The_RiotACT @The_RiotACT
Amelia Bidgood ventures off the beaten track to @yarrhwines to try their seasonal Winemaker's Sail ... and can't help but pick up a bottle of their stunning sangiovese https://t.co/vfesq5BVzv (4 hours ago)

@The_RiotACT @The_RiotACT
There’s something about that 1940s charm that wins you over every time. This home at 7 McCaughey Street in #Turner is no exception https://t.co/iTSEzUMGL9 (5 hours ago)